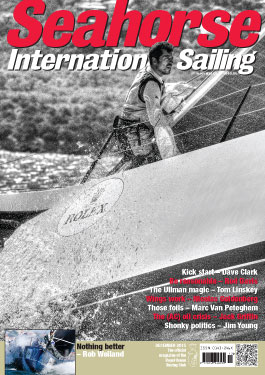 From the top
The Maxi72s have come of age and the TP52s… three years ahead of the curve! ROB WEILAND

The Machete manifesto
With generous foresight DAVID ‘Son of Cogito’ CLARK has just about persuaded us to get out the chequebook. Now see what you think...

Moving on
The first 10 years have flashed by; now there are not one but two new foiling cats on the horizon for the Extreme Sailing Series. ANDY TOURELL

Update
JACK GRIFFIN on the oil crisis hitting the AC50s, TERRY HUTCHINSON gives the nod to a good (young) man, a cruel month for Italy’s ANDREA MURA, welcome back SORC, plus HERBERT PEARCEY and not flying on modern aeroplanes

Rod Davis
ISAF, Rio 2016 and why things are not always as simple as they sometimes appear from the outside

ORC Column
Good progress, but is the ORC rule yet to be tested in anger? DOBBS DAVIS

Design – Wings work!
Many words have already been spoken but in Argentina NICOLAS GOLDENBERG and a strong technical team have been busy turning some of those words into deeds…

Seahorse build table – Forza!
And MATTEO POLLI has come up with the latest iteration of the Italian racer-cruiser model

Sailor of the Month
Tenacious… and generous