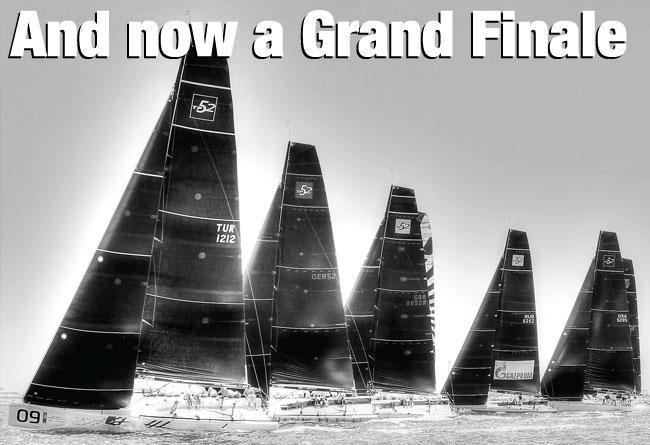 It is like yesterday that we started the 2015 season in Valencia and now I am packing for the final event in Cascais, with its crisp Atlantic conditions and so close to the charm and history of Lisbon.

The Seahorse editor suggests I offer my personal take on the performance of the different boats this year. If I had something sensible to say then I guess I would be running a team and out on the water each day. Truth is nowadays I hardly ever get out to watch the racing as that means long nights spent catching up with my real work. So my take on things comes from following the tracker while doing other stuff and foremost from talking to owners and sailors.

Most of my working life has been spent putting together raceboats and to do this well you have first to find out what the client wants… basically to listen. Apparently easy, but of course it never is as what exactly do we want? And then we never want the same thing as a project evolves. I’ve learnt to be patient, not my forte, and have developed a sense for realistic deadlines and direction. Of course, foreseeing what comes next helps, it isn’t always history repeating itself.

Designers, builders and teams follow a similar process, narrowing down choices up to the moment that you have to deliver. A design, a boat, a team, a race, a win. In our TP neck of the sailing woods we have two design teams doing each four or five boats. These are of course not four or five unique designs, but they are each optimised to the input of the teams and of the specialist advisors the teams use.

Appendage shapes will vary, hull shapes by the same designer will vary but as far as I can see only marginally this year. All teams have the same mast supplier, Southern, but none of the masts, although from the same mould, has the same laminate spec and so all differ in characteristics, at least in theory. They also vary in spreader position, spreader angle, rigging attachment points and so on. The rigging for sure is not all identical. Different suppliers have different solutions, weights and diameters. And this goes on and on for all the detailing throughout the boat, equipment and sails.

Once the teams start sailing it gets exciting. Reality interferes every time that you hoist something new, try a new crewmember, a new technique, line up with another boat and for sure when you race. Boats are never exactly the same from event to event – the shore team always works on something new, the crew is optimised and of course the events each have their specific conditions.

Then there is the psychology, how to get the best out of the team? How to focus? How to keep things pleasant? In the end this is the owner’s hobby, not his work. Do not underestimate the importance of having a good time, having fun. Managing the team is an essential part of the puzzle, and of the fun. And I have just managed to get halfway through this story without burning my fingers or any name calling…

The 52 Super Series is 90 per cent windward-leeward racing, and with boats that are near identical in performance it is a tense affair. At our size of boat, as soon as we have over 10 boats there is no free space left on the racetrack. Such close fleet racing is a speciality that few master. Sailing is already very complex, but sailing under constant positional pressure also requires chess-type talent.

Even the most talented require top-level fleet racing experience from a young age complemented by practice, practice and more practice. It is therefore not strange that you regularly see the same tacticians in those fleet racing classes where pro sailors are permitted, like the RC44, Farr 40 and Melges 32. To name a few: Terry Hutchinson, Michele Ivaldi, Vasco Vascotto, Markus Wieser. Through the years you get a good idea who has the sixth sense that makes you an expert in this field. But never forget that the tactician is just a wheel in a rather large machine. Part of being a good tactician is how you pick your work – it’s easier to be good on a fast boat.

Who was fast out of the box this year? Easy to say now that Azzurra have shown such speed, consistency and intelligent optimisations. Their 35pt lead over second-placed Quantum Racing and about 50pt over numbers three to six going into the final event is impressive. Their boat’s detailing is based on many years of racing TP52s and building quite a few Azzurras. Their sailing team over the years has not varied that much, the Argentinean core can almost be seen as family and is now in a happy mix with four Italians, one Spaniard and the ‘odd one out’ Kiwi trimmer Grant Loretz. The boat is sometimes owner-driven by Alberto Roemmers Jr but 90 per cent of the time it is Guillermo Parada at the helm. Vasco Vascotto calls the shots (with a few variations on Mamma Mia) and Bruno Zirilli navigates. This year the team have shown more focus and better composure under pressure than before. I am sure this has taken a lot of work.

Maybe not a surprise, given Azzurra is the first sister out of the mould, but Bronenosec possibly was the fastest boat from hitting the water. In many ways the opposite from Azzurra as a team, as it is owner Vladimir Liubomirov’s first TP52. Vladimir always drives the boat himself, it was launched the week before the first event and the team had very little advance practice. The Bronenosec team is built around the crew of the same owner’s RC44 and is a mix of sailors from Russia, Italy, Australia and New Zealand.

Coincidence or not is that the ‘brains’ are Italian, as on Azzurra: Michele Ivaldi tactician, Francesco Mongelli navigator and Gabriele Benussi strategist. Not distracted by any time to test, modify or tune, from day one Bronenosec showed good speed. But to match Azzurra in consistency over a wide range of conditions is another thing. There is much still to learn. Possibly we shall take home from this team that it is possible to put together a fast TP52 project based on an existing team of good pedigree in other classes.

The same really can be said for Alegre and owner-driver Andy Soriano. A team honed in Soto40s and Maxi 72s and up there with the best from the beginning. Again not the consistency of Azzurra but, that said, Azzurra 2014 was nowhere near as consistent as they are in 2015.

How difficult it is to be consistent is demonstrated best by Quantum Racing. A new boat combined with a few changes in this stars-only team did not immediately produce the flawless performance that we are so used to. Winning the Copa del Rey and sneaking into second overall, however, shows that ‘never ever give up’ remains a good strategy. In hindsight it is perhaps a pity the team chose to have Ed Baird drive the TP52 worlds – father or son DeVos would have kept the team on track for the overall owner-driver trophy.

The competition that is the most exciting in 2015 is indeed the one for the John Cook Owner Driver Trophy. With one event left there is little between leader Sled (Takashi Okura), Bronenosec (Vladimir Liubomirov), Alegre (Andy Soriano) and Platoon (Harm Müller Spreer).

The Sled team have ample TP52 experience, Don Cowie cracking the mainsheet as well as the whip and the ever-smiling Canadian wizard Ross Macdonald on tactics alongside strategist Hamish Pepper (NZL). They have lost a few points that could have gone their way, but still in the lead so why not?

Strongest challenge might come from Harm Müller Spreer and Platoon. Seemingly built of steel, this boat and team are on the way up, finding more speed and confidence than any of the others since the worlds. The brains trust of Markus Wieser (tactician), Séb Col (strategist) and Johan Barne (navigator) did some good work recently with a second in the worlds and a third in the Copa del Rey – but most impressive and making their tactics look even better is that Platoon is more consistently fast than the other Vrolijk designs.

In seventh place overall after four events we find Provezza. Ergin Imre’s team have achieved the modest goals that Ergin set before the season, but alongside the joy of a handful of bullets and a podium place at the worlds there remains a lack of consistency in both speed and positioning that is probably related and that the team so far has not been able to resolve. Provezza is similar in set-up to Sled, both teams having a pro-am crew with nearly half the team certainly not making their living racing boats. I would say aim to match Sled in 2016 and achieve sixth or better overall in 2015…

With the top five after four events all Botín designs you can see why just looking at numbers can lead to the wrong conclusions – my take is that there is nobody in the fleet praising or blaming boats or equipment for their current placing. And this is as it should be; any boat out there can be in any position or can be brought to the level to be in any position. I already mentioned how fast the Botín-designed Bronenosec and the Vrolijk-designed Platoon sometimes are. If anything it tells us all boats are perfectly capable with the trick being to be the one staying at the optimum for the longest.

About sails I can state that I haven’t a clue what is best! Like almost anybody else, I like to add. As chief measurer I just know that sailmakers are sometimes a pain in the bum when it comes to the rules. It must be all this three-dimensional thinking that makes it difficult to live with the fact that we measurers are two-dimensional people: black or white, within the rule or not. Yes, the rule is sometimes stupid, yes, the rule is always behind, but then please help to improve the rule first and then build the sail you dream of.

And why are two ‘identical’ computer-designed, computer-built sails never the same? Please tell us, or better still resolve this. Boat racing is difficult enough as it is. Then again, modern sails look so much better than what we called high-tech in the previous century. Development never stops, certainly not in a development class.