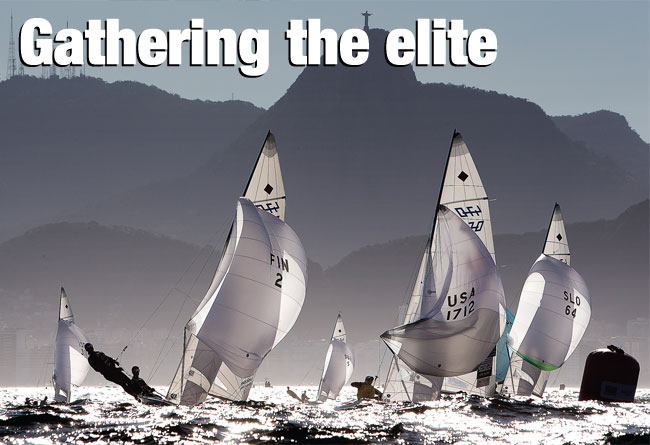 Not perfect but certainly getting there – Rio 2016

Leading up to the second Olympic Test Event in Rio de Janeiro we almost forgot that we were in Rio for the sailing competitions given the amount of press dedicated to the problem of water quality and ‘floating objects’ in Guanabara Bay.

Water quality continues to be of major concern to ISAF and to everybody else involved with the sailing competitions. ISAF’s tropical disease expert Dr Nebojsa Nikolic worked tirelessly with the Brazilian authorities and the Rio 2016 organising authority to monitor the water quality and the health of the sailors as well as of those officials who came into contact with the water. One area, inside the Marina da Gloria itself, is of particular concern; however, we are assured by the Rio organisers that the problem will be addressed before the Olympics. One of our 49er sailors experienced serious infection and there were several upset tummies but, difficult as this sounds, the situation is slowly improving.

The other area of concern, objects in the water, was dealt with very efficiently using daily helicopter observations supported by 10 ‘eco-boats’ which were constantly crisscrossing the bay in search of floating obstructions. Sailors who have sailed in the Guanabara Bay for many years, including the two ISAF Technical Delegates, agreed that the bay has rarely been as free of objects as it was during this latest Olympic Test Event. In part this was due to the prevailing southerly winds and lack of rain; an opposite situation, northerly winds with lots of rainfall, will certainly test the effectiveness of the eco-boats and indeed, in just these conditions, on the day after the event finished and following a night’s rain Ponte Course was tested and found to be unusable for racing.

Although by no means forgetting water quality, on Saturday 15 August everybody’s attention at the Marina da Gloria turned to the business at hand: sailing. With a turnout of 339 sailors from 52 countries it is fair to say that the elite of world sailing had gathered in Rio. All 10 Olympic classes were either at or almost at Olympic strength which gave race officials, Rio organisers and ISAF itself a perfect opportunity to test everything before the Olympics in exactly one year’s time. Six racecourses were tested with international and national technical officials harvesting the experience that will be needed to run the Olympic Regatta as well as possible.

At the second Weymouth test event in 2011, ahead of London 2012, no fewer than 18 of the eventual 30 medal winners were present. Given the quality field at the second Rio 2016 test event a similar cycle will almost certainly be repeated. Also worth noting, the fact that 19 different nations medalled at Rio shows that the ‘performance gap’ is reducing steadily.

It has to be said that the Rio organisers did a very commendable job in preparing the sailing venue, which was almost 100 per cent temporary given that the Marina da Gloria rebuilding project is running at full tilt. The marina project is scheduled to be completed by January when it should be handed over to the Rio 2016 organisation. If plans and artist’s drawings are anything to go by then Rio will deliver another excellent Olympic sailing venue.

For spectators, as sailing is one of the few Olympic sports that can be viewed for free, without the need to purchase a ticket, Flamengo Beach is expected to see record crowds – especially if Brazilian sailors get into the Medal Races. Following on from the London 2012 experience, the Medal Races themselves will be run as close to the beach as possible, with the final leg heading straight in towards the beach to finish just outside the breaking waves and as close to spectators as possible.

For our 2015 Test Event the weather was as near perfect as sailors can hope for. Most days enjoyed brilliant sunshine with temperatures during the daylight sailing time between 24°C and 28°C. Wind conditions did prove challenging at times, particularly on the three race areas outside Guanabara Bay; however, all classes were able to complete their scheduled programmes which is what ultimately matters most.

If the weather at the Olympics is anything like that of this year’s final Test Event, in the iconic setting of Guanabara Bay in the shadow of the Sugar Loaf and Christ the Redeemer mountains, then there is every chance that sailing will be one of the stars of Rio 2016.

Setting justified concerns over water quality to one side, the enthusiasm of the sailors, coaches and team leaders for the Rio venue and the actual racing conditions was contagious. We must not forget that the last two Olympics, Beijing and London, had the sailing competitions in locations away from the host cities. At the 2016 Rio Olympics sailing will be centre stage!
Scott Perry, ISAF Vice-President