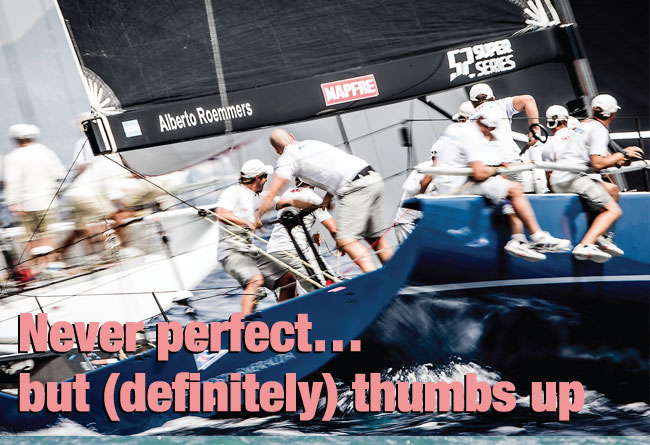 The 52 Super Series and TP52 class got more positive feedback after the TP52 Worlds in Puerto Portals than we could hope for, even from this super-competitive fleet. The comfort of the marina and the shore facilities, the ever helpful marina staff, the perfect conditions on the water with racing on the bay that was less one-sided than usual, and also because the race committee showed great skill in picking the right times and places to race.

And of course the shiny fleet of 12 thoroughbred TP52s easily matched the glamour of the quayside parade of ‘bees and wannabees’ typical of every glitzy venue these days. It all seemed so easy… but in reality getting it right never is.

Part of the fun is that the racing is close, very close. It does not take much to slip backwards in this compact fleet and it is extremely hard work to come back up again. Nearly all the boats are now current designs and very similar in performance, upwind as well as down. Crowded mark roundings and tense crosses. With 13 crew, success requires good communication, practice, trust and confidence, as well as a certain amount of self-control to keep out of those grey areas where luck is needed to avoid a penalty… or worse, a crash.

The person calling the shots has to fully understand the style and character of the crew to which he is addressing his commands, as well as of the boats and teams around him, plus of course of the style of each umpire team. As in any sport a good umpire lets the game flow and communicates what is and is not tolerated by the decisions he makes early in the game. In yacht racing, with, in our case, four teams of two umpires on the water, more streamlining is required than in sports with one or two umpires sitting in judgement.

At the Super Series we do not just go through the ISAF list of umpires to find out who is available but have over the years built a core group who are not only familiar with the teams, but who also understand the spirit of our game. The job of the police is never easy, but policing strange turf simply does not work. Our chief umpire is Miguel Allen; he is the boss because the others want him to be and quite frankly because Super Series wants him to be too. Miguel decides the routine of the day, which umpires share a boat, positioning, pre-race instructions and so on. We have two fully qualified umpires per RIB, a step-up from one ‘student umpire/driver’ plus one umpire taking decisions. In our case the two only give a penalty if both agree, a split opinion is a green flag.

At regular intervals the umpire pairings are switched around, to keep it sharp and clean. As anywhere there are pairs who click and those who struggle to work so well together. The chief umpire must optimise his ‘materials’, so to speak.

The Racing Rules of Sailing are complicated, with endless options for interpretation and debate. In my humble opinion our rules are modified more frequently than in most sports. All for the best, of course, but our end-users are not the most avid readers and most education comes from trial and error and with it frustration.

Whether to have an onshore jury or on-the-water umpiring is a key decision. A jury is relatively cheap and you will have fewer ‘cases’. Umpiring will become integral to how you race, inviting you to request a call as part of the game… Going to the jury is rolling the dice and certainly requires skill in presenting one’s case.

In the end umpiring is the fairest and also the most popular option, certainly for close racing in big boats. It encourages less risk-taking and offers a feeling of being ‘protected’… much as the sight of a police car tends to slow down drivers. In the world of TP52 racing, hitting each other with two-million euro boats at 10kt+ is not the same as a few Oppies rubbing gelcoat. And for sure our racing is a lot closer than in the Maxis and Superyachts.

Most umpiring controversies hinge around whether two boats ‘would’ have collided. What is a tight but safe cross for the likes of Ed Baird can be a heart-stopper for even the most experienced ownerdriver; and I know that Ed himself is not always certain there is a clean way out of the maze he’s just entered… the difference is he rarely displays emotion because of his level of concentration and this can be unnerving to some. There is a rule, or rather a case (Case 50) that offers guidance on what is ‘too close for comfort’. But do not expect to find any ‘safe distances’… so debate is guaranteed.

For sure the umpires can penalise even if there is no way the boats would have hit; in the case of a TP52, avoiding a contact by one or even two metres at 10kt is not safe, as there remains a grey area where the give-way boat is committed to the cross but if the call was not perfect cannot escape a collision without help from the right-of-way boat, or the execution is not perfect, or conditions change and slow the give-way boat or speed up her opponent. Any and all of this can certainly generate reasonable apprehension of the need to avoid contact…

Do not forget that racing a TP52 is about teamwork, and several seconds are still required by even the best teams to communicate a situation between the driver, tactician and trimmers. Possibly the answer is to sit down with your competitors and ask them to identify what for them defines too close for comfort. Of course there never will be a single answer, but between umpires and competitors it should be possible to achieve an understanding of where to draw the line between the sporting needs for racing this type of boat and keeping things safe.

To give an actual context, there were 42 umpire calls during the TP52 Worlds with 12 boats racing 10 races. That is an average of 4.2 flags per race. One first beat had three penalties… The conclusion must be that as the racing gets tighter so the teams are less shy of flying a flag.

Most calls were beyond doubt and accepted without complaint. Three calls led to onshore debate that was ‘stronger’ than the class manager likes to see. In which case, as the person responsible for the umpire team, I familiarise myself with the cases as much as I can (using video replays and so on).

For me it is key that all sides sit down together and take time to go through the case in detail. Where mistakes are clear this must be acknowledged and time spent discussing how to improve. It must be accepted that mistakes can and will be made. With more boats than we had before, we are approaching the need for a fixed structure for our debriefs – the bar is not always the best place.

In the case of a heavily contested call, it may be a good step to not only sit down with umpires and the penalised boat, but to get all the teams involved. That will stop it becoming one team versus the umpires, while the debrief also helps clarify why a team raised a flag in the first place.

Azzurra’s average hit was under the 4th place per race usually required to win overall (3.6 average, one win). Platoon averaged 5th with three wins and then Provezza, also with three wins, scraping through to third on a tie-break with Rán (4th) and Alegre (5th).

Quantum Racing lost their crown in dramatic fashion with a dead last in the final race, tumbling from silver to 6th in a matter of minutes… yet still only 1pt worse than Provezza in 3rd!

Looking ahead, after Copa del Rey we move on to the 2015 grand final in Cascais. Meanwhile, another five-event European series is being finalised for 2016, with two new venues (Scarlino and Mahon) ending once again in Cascais, after which the boats will ship to the US for a repeat of the previous successful US 52 Super Series – of course including 2017 Quantum Key West Race Week.

Believe it or not, at the final dinner in Portals several owners were already committing to this one. My only concern is that by 2017 I am well into 65 years on this planet. Not getting any younger.