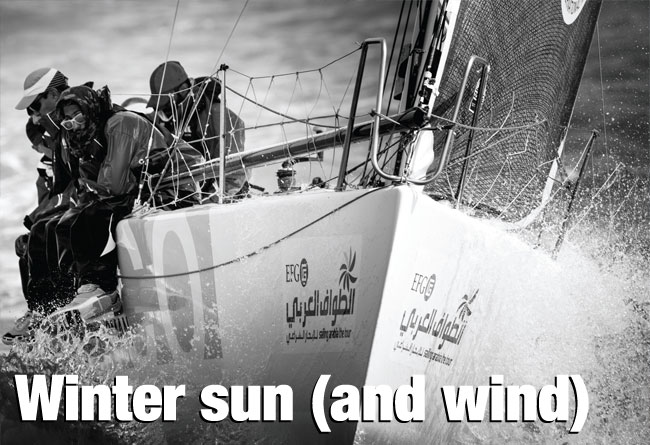 When EFG Sailing Arabia – The Tour (SATT) was launched in 2011 it was hoped that in time it would turn into a yacht racing classic for the Middle East with the bonus of offering European and American sailors first-class conditions for extended winter training. Five years on, and after a few changes stemming from sailor and sponsor feedback, SATT has climbed the priority list in the global sailing calendar, the annual title becoming more prized with each edition and an increasing number of professional and amateur teams coming from further afield to compete.

The event was conceived along the lines of the famous Tour de France à la Voile, with a tempting mix of inshore and offshore legs that challenge the full range of sailing skills, tactical knowledge, physical preparation and endurance. With a course extending more than 760 miles around the Arabian Sea, visiting six different cities, it also offers valuable opportunities for the various tourist boards representing the hosting ports to showcase their attractions on an international stage.

With the Tour de France à la Voile having now switched to coastal adventure and stadium racing, SATT is now the only race of its type to offer similarly intense one-design competition over long-distance legs combined with short-haul sprints – the reason why the 2015 edition attracted a record 11 entries with 21 different nationalities represented. Six of the teams this year were local to the Middle East, while Team Averda featured mainly young British sailors from the University of Plymouth and was skippered by top German sailor Marcel Herrera. Bienne Voile flew the flag for Switzerland, Team Delft for The Netherlands and GAC Powered by Dongfeng Race Team for China.

The 2015 edition also saw a dramatic change in route with the fleet having their stamina and patience tested with tough new upwind legs. Previously the event started in Bahrain and finished in Oman, but this time the 760nm route was reversed and the Farr 30 crews were battered by headwinds for much of the course after they started at Muscat’s famous waterfront development The Wave.

‘It was a bigger challenge than we anticipated,’ said Mike Miller, campaigning for the first time on the Kuwait-sponsored Zain alongside experienced French skipper and navigator Cedric Pouligny and Gerald Veniard, who headed up a crew of Zain employees of Kuwaiti, Bahraini, Egyptian, Moroccan, Turkish and British descent. ‘It was physically demanding but, boy, what an experience. We did amazingly well, learned a huge amount about racing and about the Middle East in general and came away with huge smiles. 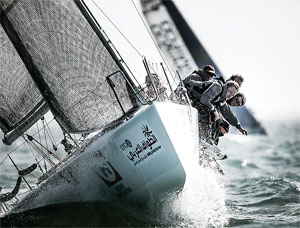 Aside from memorable shoreside events (below) EFG Sailing Arabia – The Tour offers a broad mix of conditions with a combination of inshore and offshore stages. Using the ageless and thoroughly rewarding Farr 30 OD (née Mumm 30) the event offers an excellent and well-organised winter warm-up for European crews – simpler to organise than Key West and with turnkey charter packages and good boats now readily available 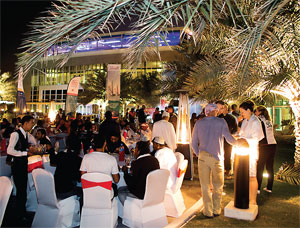 ‘But sailing upwind in such big breeze plus large seas was a real test. We were mostly a bunch of middle-aged men and you can delude yourself that you are 21 for perhaps the first few hours but after a while it comes back to bite you.’

At the other end of the spectrum was EFG Monaco, backed by the race sponsor and featuring two of the biggest names in offshore racing, skipper Sidney Gavignet of France and Damian Foxall, Ireland’s most complete ocean racer. It was no surprise that EFG Monaco were runaway winners, but despite the experience onboard they were still outclassed on the second leg by the students on TU Delft Challenge, and on the final leg by that self-professed ‘bunch of middle-aged men’ on Zain.

‘This was probably the best SATT because it was a really good challenge and everyone was up for it, fighting like mad for position,’ said Foxall. ‘SATT is now the regatta to do in February. It is pure racing with the one-design Farr 30s which are perfect for this type of event. The conditions are great and we get to go to countries that we wouldn’t otherwise visit.’

With its growing reputation, SATT is expected to attract more entries in 2016 while the announcement earlier this year of a significantly more difficult route has further increased interest from European teams looking for a winter challenge in a warm climate.

On 14 February 2016 the new-look SATT will start in Dubai with an inshore race hosted by the Dubai Offshore Sailing Club, the first opportunity to put points on the board. More points will be up for grabs in the first offshore leg to Abu Dhabi where the second inshore race will be staged. The next leg is the ‘dodge the oil rig’ challenge as the fleet heads to Doha through the oilfields, but it is the brand new longest leg from Doha to new SATT destination Khasab in Oman’s northernmost governorate that is set to be the race highlight.

The new stage comprises a 200nm leg which could take up to four days; for some crews this remoteness will be a new experience while venturing deeper into the Straits of Hormuz will surely be worthy of the most picky sailor’s CV. ‘The longer leg to Khasab will be interesting because we will get all kinds of conditions out there,’ said Britain’s Mary Rook who has completed three SATTs with women crews from Oman and has experienced thick fog, sandstorms, raging winds and no wind at all during her three events to date.

‘Khasab is a stunning venue and normally we just sail around it at night, so we are looking forward to finally going ashore! This long leg substantially raises the degree of difficulty in this race so it will be challenging and fun for everyone involved.’

The fleet then heads back out through the Straits, round the Musandam Peninsula and down the coast of Oman to Sohar, where a cultural day will be laid on in response to feedback from visiting sailors who expressed a desire to see more of the region. The last leg from Sohar to Oman Sail’s HQ at The Wave in Muscat will be a final chance to pick up points, by which time there will have been five offshore and three inshore stages and a brand new winner.

For Rook, who coaches the women on Al Thuraya as part of Oman Sail’s Women’s Programme, the race is a superb platform for encouraging more women to sail, not just in Oman but around the Arabian region. ‘Our girls learned so much this year and two of them are now racing in Europe in J80 regattas and loving it. We came sixth in 2015, which we were very happy with, but it would be great to see more women’s teams enter in 2016.

‘The organisation of the event has really improved since I first did it and the last event in 2015 was seamless and smooth. Gilles Chiorri who runs the racing knows the waters, the boats and the conditions and that helps to make it a very good race.

‘This year there were teams who had done the Tour de France à la Voile and there were also several corporate teams, a sure sign that this event has come of age. It was close on the startline and often close at the finish. It was serious racing.’

In recognition of SATT’s growing stature the Volvo Ocean Race and Oman Sail forged significantly closer bonds by announcing the VOR Rookie Awards for the top three sailors aged under 30 competing in SATT. In recent years VOR sailors Sidney Gavignet of France, England’s Dee Caffari, Damian Foxall of Ireland and Australia’s Nick Moloney have all competed in SATT, with Gavignet and Foxall twice winning the title. These new awards confirm SATT as a valuable feeder event for young offshore sailors.

‘SATT is like a very mini Volvo Ocean Race,’ commented Fahad Al Hasni, skipper of all-Omani crew Team Renaissance who finished fifth in February. ‘Watching the Volvo Ocean Race is an inspiration because you see teams who are not especially strong pushing harder and harder and it makes you want to do the same. I am excited about the longer leg in SATT in 2016 – it will be harder and we will need to be patient but we are really looking forward to it.’

‘It was always our aim to make EFG Sailing Arabia – The Tour the premier offshore race in the Middle East so we have listened carefully to what our competitors, sponsors and other stakeholders have told us,’ says Salma Al Hashmi, director of marketing and events at Oman Sail. ‘Judging by the response to the changes we have made for 2016, we hope, come February, to be hosting our biggest and best edition of SATT so far. There is growing respect for this event and it is great to see so many international teams now seeking to incorporate SATT into their winter programmes.’