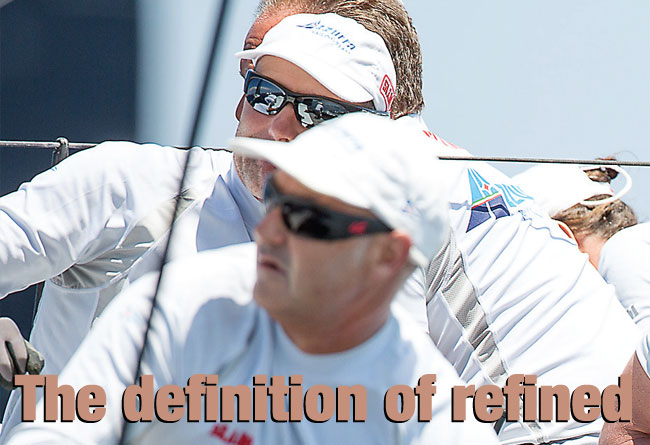 We are two events into the 52 Super Series with the TP52 World Championship 2015, arguably the most important title to win this year, coming up imminently.

Racing from Puerto Portals brings us close to the best racing conditions in Palma Bay (and to the ambiance, within 100m of two of the best restaurants on Majorca). It is going to be a tough week. With 12 TP52s in the event the winner is not easy to predict. Can Azzurra beat the pressure as well as the other 11, all capable of winning races? Will Quantum Racing, with Ed Baird on the helm, pull it off once more? Or Andy, Eduardo, Harm, Marco, Niklas, Tak, Tony or Vladimir, our owner-drivers? So far performing at least on a par with the pros.

Having managed the construction of so many racing boats in the past decades I look at the TP52s not just with a passionate eye. But being out of construction manage ment for over seven years has taken its toll. Often I have to look more than once to assimilate function and detail. Sometimes I just ask. 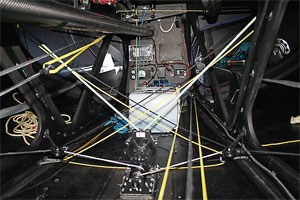 Above: some of the complexities that are going on below deck on the latest TP52s, in this case the Botín-designed Phoenix; below is the clean and largely monocoque primary structure of the latest Vrolijk-designed Provezza. 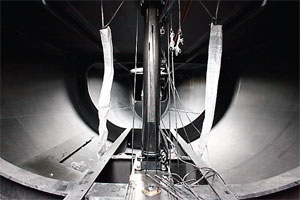 The obvious guys to ask are those behind so many successful TPs of recent years, like Micky Costa (Azzurra, Bronenosec and Phoenix), Jan Klingmüller and Tim Powell (Rán), Jeremy Smith and Jared Henderson (Quantum) and Chris Hosking (with Jared responsible for the Artemis TPs and now on Provezza with Tony Evans). I checked in on the latest toys with Micky Costa who has made construction management his core business. Which means that he now hardly ever races the boats he managed the build of, nor does he work on the shore team… Micky moves straight on to the next job.

SH: What layout developments do we see looking at this generation of TP52s?

Micky Costa: The biggest change is brought about by the removal of the rule on cockpit volume, allowing us to shape the cockpit as we wish. We try to create more cockpit space while keeping the trimmers in a comfortable position, not too far outboard so they can see the jib properly. Then we aim to lower the centre of gravity of the cockpit, which translates to a large and low as possible floor and narrow side decks aft… without losing longitudinal stiffness.

Then we pick and position the equipment matching the specific requirements of the team in question. Again, functionality, weight and centre of gravity are the key drivers. Not being restricted on volume means we can run the aft cockpit floor all the way up to the hull, with the spinnaker blocks now simply lashed to the aft stanchion. We also taper the aft side decks to save weight. Teams have different ideas on how much aft side deck is the most efficient.

Also new is that the rigs are now allowed to have backstay deflectors. This has changed trimming quite a bit, but also the systems. To minimise compression load into the boat’s structure, the deflector cylinder is mounted on the mast. And so the hydraulic system has to cater for two functions, the other one being the headstay ram. All boats have slightly different choices for how to fit the rams and connect the headstay and deflectors to them. Usually a Y-valve actuation next to the grinder’s foot selects where the oil goes, headstay or deflector.

SH: What about differences on deck between the Botín and Vrolijk boats?

MC: Botín have chosen to keep the deck slightly bulbous, with more camber than the rule minimum to get a better ratio of weight/ vcg to stiffness. Of course Vrolijk feels his solution is the best. Either way, the result is that, in combination with a few other details, like the layout of the main hatch and halyard jammer area and where the cockpit sides end, you can see immediately whether it is a Vrolijk or a Botín design.

The structure of the latest Botín boats has also changed, removing one central bulkhead and adding two large longitudinals on each side of the centreline. This really opened up the interior. I think Vrolijk has a similar concept aft but has a different solution forward and around the keel attachment.

SH: And differences between Azzurra and other TP52s…

MC: One is the primary pedestal orientation. Most boats have it fore and aft but the Azzurra team like to grind athwartships. It is a personal choice, both can be made to work; but there is a knock-on effect on where the crew are positioned in the cockpit. I feel one of the more important differences is the larger 990ST runner winches on Azzurra; so far the team are happy with the trade-off in tacking efficiency vs weight increase. SH: And the winches and winch systems? MC: There is quite a bit of development in the detailing, but I think we are all waiting for that ‘great new idea’ in terms of the principle of how a winch functions. All boats have Harken winches, typically the 650.3ST is used for all functions except the pit winch, which is usually the 500.2ST. 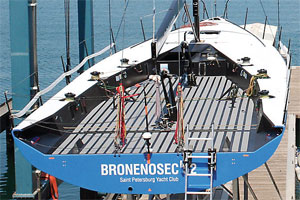 The larger 990ST backstay winches on Azzurra are so far proving worthwhile. Comparison in deck layouts (above and below) – Rolf Vrolijk has pared away the aft structure on Bronenosec to the minimum, relying more on the hull shell for stiffness; Botín opts for a conventional treatment on Provezza 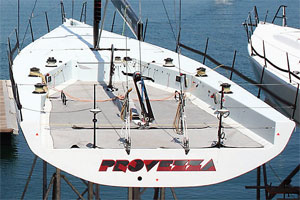 Some boats use specialists like Jon Williams of Stay In Phase, customising and adding to Harken components. Others keep the customising ‘in house’ with Harken. With Azzurra we have been one of those, while keeping an eye on development. Harken now have more aerodynamic pedestals, the very narrow Wing version for fore-and-aft mounting and the Air pedestal for athwartships mounting with the sculpted hole in the middle and each leg shaped like a wing to reduce drag.

Then there is the MX option, where you have two chains running down the pedestal with either the 1:1 chain or the 1:3 overdrive engaged by pushing in the top spindle. MX can also be integrated with a rotary hydraulic pump mounted directly to the pedestal below decks, eliminating additional brackets and transmission – then you have one of the chains dedicated to drive the rotary pump.

You simply push the top spindle to select hydraulics and choose headstay or deflector from a valve on the cockpit floor. Hydraulic release is controlled using thin lines connected to dump valves.

Azzurra employ the MX option with the rotary pump on the aft pedestal. To further reduce weight and keep things simple some teams now choose to connect only one mainsheet winch to the grinder system and drive the other with the top handle. Finally, to save weight, wherever possible the system parts are now made in pre-preg autoclaved carbon.

SH: I noticed on Bronenosec a system to drive the rotary pump from the side – plus most teams now use Harken hydraulics?

MC: Well spotted. Yes, they can now pump while hiking, one of the ideas we developed this year. The choice of Harken hydraulics is mainly based on facilitating easy integration within the total package and a versatile and reliable 500 bar system.

SH: What’s going on inside…?

MC: These boats are very system driven. There are so many lines and purchases through the structure that we need to think this through in advance to make it all work properly. On Azzurra with King Marine we put a big emphasis (and many hours) into limiting friction while trying to have the boat completely drilled and with systems pre-installed before the deck goes on. It is a cost and time saver and a big headache if you need to do these jobs after the boat is closed.

The main attraction for the fans and also a boost for the crew when it goes right is the spinnaker drop. If executed well the latest systems are so fast that it looks like the boat swallows the spinnaker within a few seconds without the crew doing much more than guiding it through the forehatch. The trick is a large carbon drum mounted on the gearbox under one of the primary winches, reeling in the very thin drop line that runs over a carbon roller at the forehatch and is led aft to the transom and then to the drum. Some boats have the drum on the outside of the mainsheet winch bevel box and there are also systems directly linked to the pedestal. During the drop both pedestals are engaged and worked by three or four grinders.

SH: You never use I… always we?

MC: This stuff is about teamwork, part of my work is co-ordination and I share all of this effort with the team. Especially with the shore team, King and our rigging supplier. Of course, like all sailors, I like to think about how to improve the boat. The continuity of projects like Matador/Azzurra makes that development flow naturally.

We start early with the crew input, months before construction; and in the Azzurra team the roles are well defined and respected. Then we work with the design office to streamline and explain our input. When the concept is ready then we put it to the boatyard, the shore team, rigger, VMG electronics and the external suppliers as we develop the details. That is why these boats are ready to race when launched and so well finished. Because all the partners work well together.

MC: Probably something around 20ft larger than the TP. So we both have something to look forward to – and I’ll be able to ask you the questions!