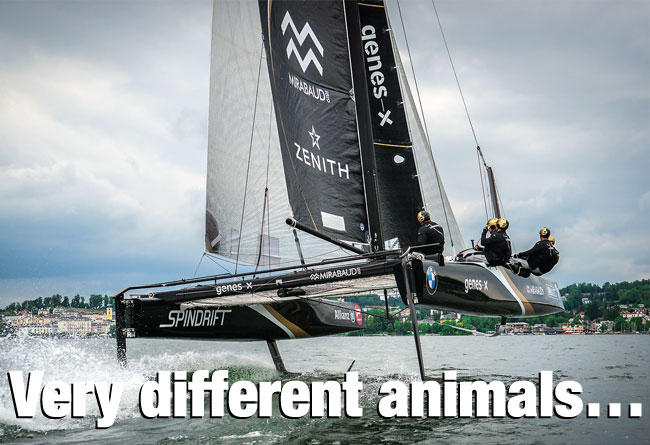 Yann Guichard and Dona Bertarelli’s Spindrift project is active in many areas of the sport, including last month’s Tour de France à la Voile onboard their ‘sportif’ Diam 24 and next winter’s Trophée Jules Verne record attempt with their giant trimaran Spindrift 2.

In between those two extremes two of Spindrift’s other projects involve cats that are closer to the platforms used for the next America’s Cup: the classic Decision 35s and the foiling GC32s. The contrast between these two classes, conceived 10 years apart (respectively 2003 and 2012), tells us a great deal about the evolution of the sport.

Seahorse: What are the most significant differences between these two classes?

Yann Guichard: Obviously the flying aspect of the GC32 makes a dramatic difference. Under 8kt of wind the two boats are fairly similar, but then it becomes a completely different game. As the breeze increases the D35 reacts in a traditional way while the GC32 lifts out. Any gusts of wind and while the D35 heels the G32 remains flat or even heels to weather as it accelerates… And we don’t need those huge gennakers on the GC32, which is clearly an advantage in terms of handling and efficiency.

SH: But what difficulties does foiling bring with it?

YG: The main difficulty is handling the transition between archimedean mode and foiling, as well as the manoeuvres which are harder and more physical. It is fairly easy to reach 85 per cent of the potential of the GC32, but that last 15 per cent takes a lot more effort; it is extracting those last per cent that will make the difference between teams in the future.

YG: The main difficulty is handling the appendages efficiently through the transition phases. On the D35 you can easily lift one daggerboard and drop the other. On the GC32, with highly loaded lift-foils, it is physically harder and your timing needs to be perfect. The rake angle of the foil is also an issue: on the GC32 this is managed by the bowman and so maintaining a constant dialogue with the helmsman is essential. Further up the scale on the AC45 the helmsman handles this himself using hydraulics and push buttons on the wheel – which is much more efficient.

SH: Just how big is the performance gap between the D35 and GC32 platforms?

YG: The D35 reaches its top speed very quickly. With 14kt true wind speed, we can reach the boat’s maximum speed – which is approximately 23kt. The GC32 is slower in light air and during the transition phases; however it is much faster once lift-out takes place. Once free of the water a well-sailed GC32 will see speeds of 40kt or more.

SH: Is the foiling platform more dangerous with these extraordinary speeds?

YG: No, on the contrary. Bearing away on a D35 can be extremely hairy: all the crew are positioned right aft but the risk of pitchpoling is still ever-present. The manoeuvre is much safer on the GC32; the boat accelerates and the bows lift. Having said that, speed leads to other risks and we need to be well protected by wearing helmets and America’s Cup-style safety gear.

SH: What does the future of multihulls look like?

YG: The future is foiling, no doubt about it. The D35 remains an excellent platform for the lake, with unpredictable winds and constant transition phases. However, the absolute dream is a D35 that gets up on foils and flies with 10kt of true wind. The technology is there and it is everyone’s wish; there is no reason why we won’t get there.

Bol d’Or Mirabaud 2015 – stars at the helm
From light winds to 40kt gusts and blazing sunshine to pitch-black skies, for both sailing legends and enthusiastic amateurs the Bol d’Or Mirabaud lived up to expectations. 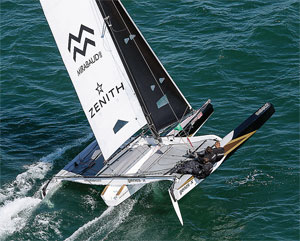 There’s nothing slow about any of the Mirabaud line-up. The team’s new GC32 (above) seen in full flight mode is the latest addition to this high-performance navy, while the Diam 24 (top) is now the tool of choice for the Tour de France à la Voile. Mirabaud has also long been a supporter of the D35 Ladycat (below) on Lake Geneva – another D35, Team Tilt, won the 77th Bol d’Or Mirabaud in June. 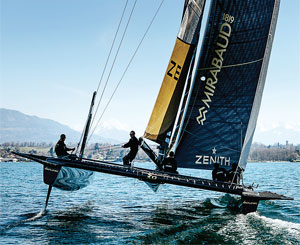 Team Tilt, helmed by 19 year-old Sébastien Schneiter, won the trophy in style, crossing the finish line after just 12h 5m 58s of intense racing… only 18 seconds ahead of Ernesto Bertarelli’s Alinghi and just over a minute ahead of Dona Bertarelli and Yann Guichard’s Ladycat powered by Spindrift Racing.

Schneiter is one of Switzerland’s latest up-and-coming talents. Sailing on anything that floats almost since he was born, he is preparing for an Olympic campaign in the 49er class with his buddy Lucien Cujean; their target is Tokyo 2020 though they may yet qualify for Rio 2016.

Sébastien’s father, Alex, is the power behind Team Tilt. A former Mini Transat and Figaro sailor, he has won six Bol d’Or titles and also holds the Ruban Violet – the monohull record around Lake Geneva. A successful businessman, and currently chairman of the Swiss Sailing Team, Alex Schneiter is the man who backed Team Tilt when they finished fourth in the Red Bull Youth America’s Cup in 2013 (at the time Sébastien was too young to participate).

Team Tilt’s achievement in the Bol d’Or is particularly significant when you look at who they left trailing in their wake. The two Bertarelli entries, plus Yann Guichard and Vendée Globe champion François Gabart… 6th on Okalys. Sébastien Josse was not so fortunate, his GC32 Edmond De Rothschild dismasting in an evening storm.

None of these offshore stars were treating the Bol d’Or lightly and doubtless they all flew back home full of good memories and with the desire to come back for more… ‘When I was a kid and still sailing Optimists I already knew about this race’, said François Gabart after the finish.

‘I think it is one of those events that every serious competitive sailorwants to attempt. For me, it was a dream come true to finally compete in the Bol d’Or Mirabaud and also to sail on a Decision 35… these are great boats. The standard is high and the race is definitely not an easy one to win.’

Less fortunate than Gabart, Sébastien Josse nevertheless continues to regard the Bol d’Or Mirabaud as a fascinating challenge. ‘The lake is very complicated, with gusts coming down the valleys and mountains, plus very calm moments followed almost immediately by violent storms!

‘It’s been tough for us, but a great experience. Our goal was to improve and get to know our boat better. In that sense, it was a success… though losing the rig was not exactly part of the plan when we started this morning!’

Rodolphe Gautier, the new president of the Bol d’Or Mirabaud, finished 10th on his very light M1 catamaran Safram, the first non-D35 across the finish. Gautier’s primary goal as race organiser is to increase the international mix of the Bol d’Or Mirabaud, particularly to encourage teams from elsewhere in Europe to come to Geneva and follow the example of François Gabart, Sébastien Josse and Yann Guichard. All are most welcome!

Life after eight laps – Dominique Wavre
No sailor has gone around the world as many times as Dominique Wavre. The Swiss veteran, who finished three Vendée Globes, four Whitbreads and one Barcelona World Race (he also had to abandon one Vendée and one BWR) still hasn’t stopped competing although his horizons have receded a little.

‘Today I am very happy to sail in the Mediterranean and also sometimes on Lake Geneva’, Dominique told me recently. Indeed, Dominique won the overall monohull division in the latest Bol d’Or Mirabaud. He also competes in Antibes, on a J/111, ‘Just with my friends and of course my partner Michèle [Paret]… just for fun but always with a desire to win!’

As ambassador for the Mirabaud financial group, Dominique also regularly takes guests sailing and also commentates on the bigger sailing events. ‘Sailing is what I do best and that is not going to change,’ he adds. Although he doesn’t have any official plans to race offshore again, Dominique doesn’t rule it out. In fact, he is adamant that he will soon go offshore again; however in a different manner in order to visit those places that he has so often sailed past without having time to explore. The Dominique Wavre story continues, just now it is a little different.
Bernard Schopfer