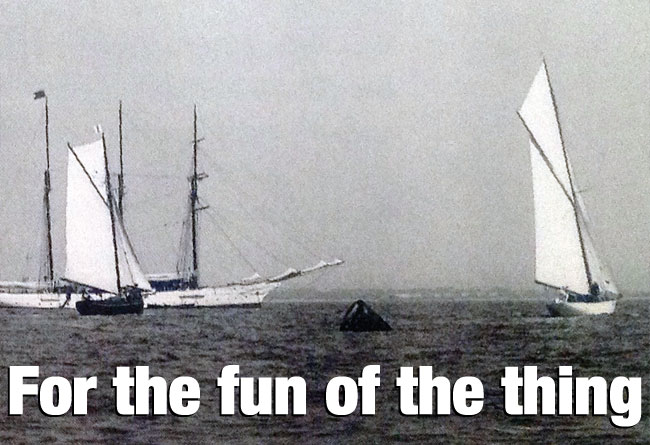 90 YEARS AGO, on 15 August 1925, a gun was fired to start the first edition of what has since become a classic of world sport. Taking part in the Fastnet can involve pushing the mix of professional and amateur participants to their limits, with everyone aware of the extreme challenges that have on occasion struck an always large fleet. The 2015 Rolex Fastnet logged 300 entries in the first 24 minutes of a frenetic registration process, which gives some indication of the reverence in which the race is held today… 90 years on from that first edition.

There was none of that adulation and respect during the run-up in 1925; the yachting press had been torn apart by a vicious row where passionate voices raised in favour of the ‘Ocean Race’ were being countered by sarcasm and negativity from establishment critics. According to one sneering commentary it was a total mistake to try to ‘tune up’ small coastal cruising yachts to race offshore under ‘some kind of time allowance’; the idea was ‘really not a seaman’s proposition’; and no yachtsman ‘with any practical knowledge’ would ever suggest that a British version of the Bermuda race was possible.

Others complained bitterly that this non-ocean race would clash with other important regattas. It was also claimed the ‘Twelves’ could thrash any of the known participants; and when the ‘metre yachts’ were specifically excluded on the grounds of their sea-going abilities, leaving a motley bunch of gentlemen’s cruisers, the reaction was that a real contest was being avoided. The race organisers had been backed into a catch 22.

In response, the words seamanship, endurance and seaworthiness were used over and over again, almost like an advertising slogan, by the race’s defenders, who included Major Philip Hunloke, the King’s sailing master.

It was hardly surprising that some people also became irritated when highprofile yachting journalists started using their columns to drum up support for the race. One provincial hack waxed lyrical, describing these first Fastnet sailors as heading into the billowing and buffeting of an unknown ocean, unafraid of ‘fair weather or foul, storm wrack or doom’.