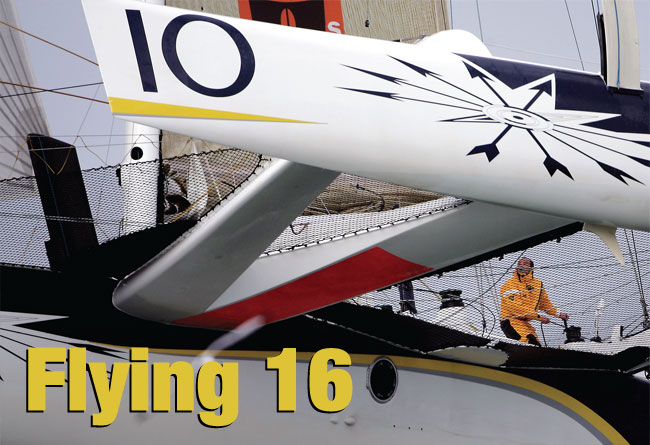 Well, not quite ‘Flying 16’ but it certainly beats ‘Sweet 16’ as a title, right? The 16th boat bearing the Gitana name will hit the water in June, and is a latest-generation Verdier/VPLP Imoca 60, sporting the much discussed ‘Dali moustache’ foils which should make her quite the aerial round-theworld vessel… We caught up with former Orma 60 skipper (and winner of two Figaro legs) Antoine Koch, who leads the Gitana technical team and co-ordinates their next Vendée effort, spearheaded by in-house singlehander Sébastien Josse.

‘We started working on this project over a year ago, at the beginning of 2014, and as a team we looked at several options,’ says Antoine. When asked if that was more a due diligence exercise than a genuine intention to go different, given the dominance of Verdier/VPLP designs, the man is quite clear: ‘Let’s not forget that the boat that finished second in the 2008/09 Vendée was conceived by Pascal Conq… that’s an option we could not just rule out. In the end, however, and having reviewed various avenues, we decided to minimise risk and go mainstream; which, come to think of it, is slightly dangerous too, because it standardises the fleet to a certain extent, and means that someone throwing a curveball into the mix could shake things up: that happened when Juan K barged in on the Volvo scene and overthrew Farr who were previously in the dominant position.

‘As you can imagine, Sébastien is an integral part of the technical team and provides a lot of input, having sailed on a variety of ocean-racing machines, both mono and multihull. He is also a keen experimenter who has developed quite a taste for foiling Moths.’

Figaros, Orma 60s, Volvo 70s, G Class, MOD70s and of course Imoca 60s… Séb has handled the finest ocean-going racers around. And because he’s got two Vendée Globe campaigns under his belt, his involvement in the development of Gitana 16 was always a given.