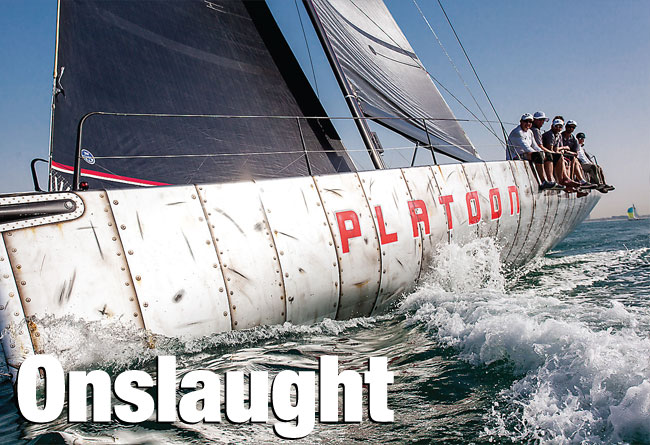 To misquote Mark Twain, ‘reports of the death of the TP52 class have been greatly exaggerated’. Rob Weiland looks at the (many) latest launchings

The new TP52s are coming out of their build sheds one after another as we witness the latest trends in design and equipment… as well as their owners’ tastes for colours and graphics! Exciting times for all involved.

It will take a lot to top the Mad Max airbrush work on Harm Müller-Spreer’s Platoon. You might have the idea but then to execute it at this quality and scale is less than straightforward. Platoon is the first TP52 for her builders, Dubai-based Premier Composite Technologies. But for Rolf Vrolijk she is his 23rd TP52 design…

Next to leave the yard, Cookson Boatbuilders, is Vrolijk design no24 Provezza. She was built alongside the Marcelino Botín-designed Sled which is already packed up for transport to Valencia. These two boats up the number of Cookson-built TP52s to 15, while Botín with five new boats can now count 19 TP52 designs.

At the first round of the five-event 52 Super Series 2015, Valencia Sailing Week, expect to see 13 boats. Four of them raced in 2014: Interlodge, Paprec (ex-Rán 2011), Phoenix and Xio Quantum (ex-Quantum 2011). All four have been carefully modified to the 2015 TP52 Rule to try to match the new boats. Finally, ‘good old’ Vesper, with owner Jim Swartz and management by Gavin Brady and Ken Keefe, will join in the fun later this season with what must be the fastest version of the many optimisations this 2008 TP52 has been through.

Thirteen boats is a different game from seven or eight; the start and first beat increase in importance so expect the boats to be slightly different in their upwind optimisation compared with previous years.

From Valencia it is on to Porto Cervo, the TP52 Worlds in Portals, Copa del Rey and the grand finals in Cascais where this year the Royal Cup will be at stake. The City of Cascais and its marina are old friends of the TP52 class, but we have never raced there in September and so it will be interesting to see the conditions we encounter. By then, of course, the teams are battle-hardened and know their boats.

To become the 2015 champion after nearly 45 starts without a discard is never going to be a walk in the park. Expect the 2014 winner, Quantum Racing, again to be the boat to beat. Of interest is the fact that for 2015 she will be owner-driven for at least four events, with Doug DeVos sharing the helm with his son Dalton.

Other experienced owner-drivers are Harm Müller-Spreer, who has had two TP52s built before; Takashi Okura, also on his third TP52; Tony Langley, third TP52, and Niklas Zennström, third TP52. Third time lucky as the saying goes, but our sport only knows one winner so the jury is out.

The other owner-driver boats are Alegre (Andy Soriano), Bronenosec (Vladimir Liubomirov), Interlodge (Austin Fragomen), Phoenix (Eduardo de Souza Ramos) and Xio Quantum (Marco Serafini). In fact, around three-quarters of the fleet is ownerdriver in 2015 – a development that does not come as a surprise and that many see as the main reason for the resurgence of the TP52 fleet. Still, I feel there is no reason to restrict the class to owner-driver only. Why make an issue where there is none? This clearly works and so we look forward to seeing that Paprec once again is helmed by Hugues Destremau, Provezza by Andy Beadsworth and Azzurra by Guillermo Parada.

First enjoy the launching of so many proper grand prix boats. The art of designing and building raceboats is simple but there are no excuses and any error will be ruthlessly exposed. Build as light as possible, as strong and stiff as possible, lower the vcg as much as possible, have the least possible windage and come up with a well-balanced all-round design optimised for strong upwind performance.

Less visible is the care and attention that go into the actual building of the hull, deck and structure. It is a pity that visitors are so rarely allowed inside these machines – the occasional photo only tells you so much.

I estimate there are fewer than 1,000 boatbuilders in the world that can master this area of their trade and only a small fraction of those really know how to manage the process. Beneath the impressive paint job is their skill and pride and one of the reasons for the performance of the boat. They will be following the racing as if there is a family member on the track.

I hope the high quality of the TP52s racing the 2015 Super Series results in new enthusiasm, new orders, growth and development. But first hit the water and get to know the boats. So much to learn, so much to do, so much to enjoy…