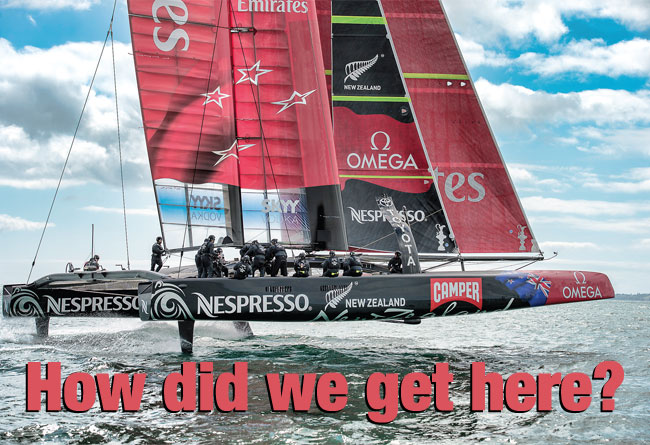 On 24 June 2017 Oracle Team USA will line up against the winner of the challenger elimination series to contest the 35th America’s Cup. It will be 10 years since Alinghi defeated Emirates Team New Zealand in the 32nd Cup match. Those races were held in ACC Version 5 sloops, which sailed at 10kt upwind, and disappointingly at 10kt downwind. An average race would take 90 minutes and include a handful of tacks and gybes. It was a straightline drag race – success and failure were separated by one or two seconds per mile of speed difference. In truth the races were also a drag to watch unless you really cared about who won and who lost.

In 2017 the races will be held in 62ft hydrofoiling catamarans that will race at around 25kt upwind and 35-40kt downwind. So what has happened to get us from a 25-tonne sloop to a six-tonne catamaran?

The 32nd Cup in Valencia was acknowledged to have been a successful event and the Defender, Alinghi, set about negotiating a Protocol and class rule for the 33rd Cup. The message was very much ‘if it ain’t broke don’t fix it’ and the plan was to upscale the monohull rule to an AC90.

At this point the America’s Cup, being a Challenge Cup governed by the original Deed of Gift crafted in 1887 by the US Supreme Court, came into sharp relief. Oracle had seen that the instrument created by the Spanish Challenger of Record for the 33rd Cup (CNEV) didn’t really pass muster as a challenging yacht club as defined by the Deed of Gift. If a legal challenge to the CNEV’s status could be mounted then the challenge process would be wound back to the second that Alinghi crossed the finish line, whereupon a new club could issue a challenge that Alinghi would be obliged to respond to.