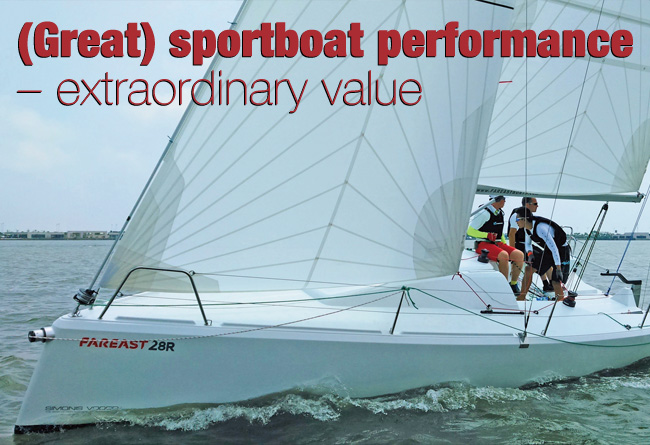 Amid growing worldwide interest in sportboat one-designs in the 27-30ft size range, one of the world’s largest ISAF-approved producers of one-design class boats has teamed up with the Simonis-Voogd design studio to introduce the new FarEast 28R. Built at Shanghai FarEast Boats Co, this latest one-design delivers the world-class consistency, durability and quality sought after in a production one-design, along with the high performance needed to attract interest in a very competitive sector of the market.

The FarEast heritage in producing racing and performance cruising yachts goes back to 2009 when Simonis-Voogd designed the FarEast 26 as a dual-purpose racer-cruiser that combined performance with comfort and safety suitable for the broad marketplace. FarEast’s use of modern resin-infused laminates and foam core construction ensured both strength for durability and light weight for performance, along with other features such as a lifting keel and a clever interior accommodation layout to enhance versatility. The FarEast 26 has proved highly successful, and today it is one of the most common boat types seen throughout the East Asian market.

Building on this success, FarEast then introduced a smaller version in 2012, the FarEast 18, to accommodate a market interested in even more practicality and portability ashore while still retaining solid performance. Simonis-Voogd designed this boat for the family sailor who wants a good day’s sailing, but it is also suitable for a crew of racing enthusiasts. The FarEast 18R then soon followed, using the same hull but a new ergonomic and streamlined deck layout to make this boat an ideal sail trainer and racer. Easy to rig and transport, this design can be brought from being road-ready to sail-ready in minutes.

In 2013 FarEast then made a bold no-compromise leap forward into the racing world with the FarEast 31R. The Simonis-Voogd design took all the performance ideas generated from the previous boats and combined them with features seen on the latest HPR designs to create an amazing carbon fibre platform that performs well beyond its 9.5m length. The 31R with its reverse bow features a long waterline length hull fitted with an enormous sail plan, carbon spars from Selden, Harken deck gear, split backstays, under-deck controls, bow-launched asymmetric spinnaker and some unusual innovative features such as its ‘bow spoilers’ to enhance airflow into the headsail.

The constituent parts of the 31R were also built using the same processes as the other FarEast boats – vacuum resin-infused cored laminates built in female tooling, carbon fibre keel fin to hold a 1,200kg bulb, Plexus bonding materials and so on – but the use of carbon has made a structure that is considerably stiffer, lighter and stronger. This boat was built to show that FarEast could produce a performance sportboat positioned at the very cutting edge of build and design.

‘We did the 31 project as a concept boat, not really intended for the mass market,’ said Maarten Voogd. ‘It has everything at the extreme for its size: maximum sail area, maximum stability and a minimum of weight and wetted surface area! The boat has met and even exceeded our expectations. We have been having a lot of fun racing this boat in Holland and Sweden, and it is turning a lot of heads wherever we go.’

Voogd also says that working with FarEast for both the local and export markets has been very interesting, because the culture is brand new to sailing and does not carry any impediments to design innovation due to long-held beliefs and traditions.

‘Almost everyone here who is new to sailing starts to learn through racing,’ he says. ‘There is very little leisure cruising, so we feel more free to pursue our ideas on performance than you would in other settings.’ 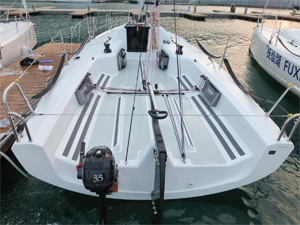 So, with roots now firmly planted in the production of small performance yachts, FarEast and Simonis-Voogd have teamed up once again to fill a niche in their product line to bridge the gap between the 18R and the 31R: the new FarEast 28R. Bearing a very close resemblance to its larger high-tech cousin, the main difference between the 28R and the 31R is in the major efforts FarEast has made to maximise its performance for its target price while not compromising on quality, durability and consistency in what is intended to be a high-profile one-design platform.

Construction uses the same vacuum-infusion techniques on the foam-cored laminates as in the 31R, but with polyester resins and E-glass fibres to save on costs. The carbon keel and rudder fins are produced from highly accurate and stable tooling milled from aluminium alloy, guaranteeing stability and consistency through many production cycles. The double-spreader spar, boom and spinnaker pole are made in alloy from Selden, because the difference in weight – less than 10kg – compared to a carbon spar is felt to be insufficient to justify the significant difference in cost for a minimal difference in performance.

At only 1,300kg displacement for an 8.5m length, and a generous 44m2 in upwind and impressive 115m2 downwind sail area, the 28R more than meets any expectation of having enough horsepower to provide lively performance in all conditions. The headsail is set on soft hanks for simplicity and light weight, although a roller furler is also available and was used for the fleet of 28Rs employed at the recent China Cup match race series. Meanwhile, the cabin-launched asymmetric spinnaker makes sailhandling easy for a crew of five to six people, as does the simple and clean deck layout.

‘Since we introduced this model in the autumn of 2014 there has been tremendous interest in this boat,’ said Voogd. ‘There are already active dealers in Sweden, Finland, Netherlands, the UK, Ireland, USA, UAE, Italy, France, Mauritius, Chile, Slovenia, Germany and Switzerland. We are confident of selling at least 20 boats by the end of this year. Our dealer in Slovenia is especially enthusiastic, committing to buying a fleet of 28Rs for use in the Adriatic region. Interest is very strong because the value for performance is unlike any other boat currently on the market anywhere.’

As for pricing, the FarEast 28R offers amazing value: US$38,000 ex-tax ex-works Shanghai. With inexpensive container transport options from the global port of Shanghai, the 28R can be ready for racing quickly and inexpensively anywhere in the world. And for those not yet able to race the 28R in a one-design fleet, don’t worry, the rating for the boat is competitive at 596 sec/mi GPH in ORC and would make it a perfect addition to any sportboat fleet.

Anticipating this strong response, Voogd and the dealers are now working on one-design class rules to help entice those interested in boat-on-boat competition. The 28R’s trailerable portability will only help encourage further fleet growth and development.