The International 14 class has now been active for more than 80 years. Time enough then to see at least a flattening out in terms of development... Absolutely not, say class stalwarts George Nurton and Tom Partington

An international class since 1928, the International 14s have been relentless in innovating and adopting the latest technologies to remain consistently at the forefront of dinghy performance, holding their own comfortably even in this latest era of lightweight skiff design.

Recent advances in 14s have also neatly coincided with breaks in America's Cup cycles as designer Paul Bieker vents his pent-up creativity. As the 33rd Cup cycle dragged out, so a new Bieker 6 was clearly in the pipeline; but keen to jump the gun last winter I persuaded Tom Partington, a fellow 14 crew and a yacht design student, to create a new design for my own amateur but enthusiastic development plan.

I had previously set up, with extensive help from Pom Green (now of CMI, Thailand), the build of three modified Bieker 5s, one of which has since won POW and the past two world championships (see Seahorse April 2010). We agreed that it was now time to try out a few more ideas.

To read on simply come and join us TODAY!!!!!
Please take advantage of our latest subscription offer or order a single copy of the May 2011 issue of Seahorse International Sailing 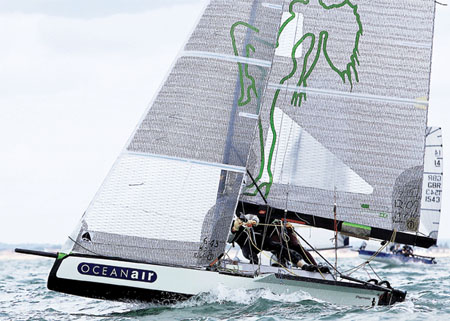