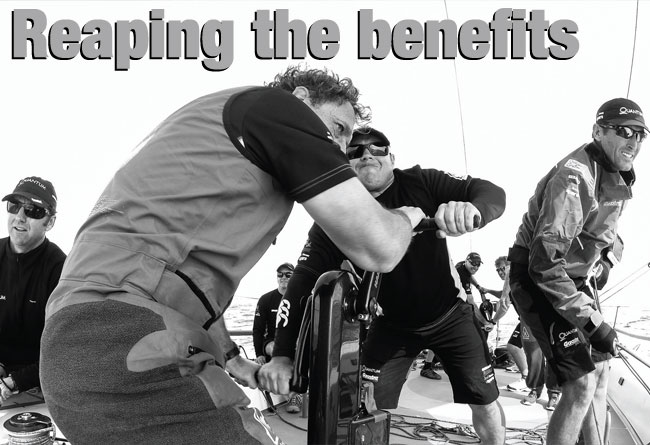 One of the most impressive aspects of Oracle Team USA’s come-from-behind victory in the America’s Cup was the team’s ability to make significant improvements to their AC72’s performance race by race... perhaps even leg by leg.

The ability to analyse performance quickly and feed findings back into the design loop is one of the keys to successfully managing the grand prix racing battleground. It’s why a number of teams are using the VSPARS system to help them develop faster and more accurate sail shapes. The TP52 team, Quantum Racing, has been using this deck-mounted sail vision and rig vision system to great effect on the TP52 circuit, winning world titles and racking up impressive overall scores of 1,2,1 in the last three seasons of the 52 Super Series.

A key part of the Quantum TP52's success has been the crew's ability to change gears quickly on the race course, as well as take lessons learned and put them back into the design loop for recutting existing sails and influencing the design of next-generation sails.

The boat’s jib trimmer and sail designer is Brett Jones, a Florida-based Australian pro sailor who is plugged into the VSPARS system during racing via a wrist-mounted PDA display. With cameras mounted on the mast and in the cockpit to measure the shape of four mainsail stripes and three jib stripes, the VSPARS system takes 3-second snapshots of the sails and provides instant feedback to Jones’s PDA. ‘I can look at a variety of different data,’ he says, ‘although we tend to use it mainly for camber and twist.’

Jones has different cambers and twist profiles logged for different wind strengths and sea states based on analysis of historical data from previous regattas. This enables him to keep a close eye on the sail set-up and call for rapid alterations in trim as conditions and tactical priorities change. ‘I remember one race when we were coming up to a top mark, and it got really light,’ Jones recalls. ‘We were maxed out on the runner for the conditions and bladed out on all our sails; I remember looking at the PDA. ‘The main looks flat,’ I said, so we backed off the runner, but the bottom stripe was still really flat and bladed out. ‘Oh crap, vang’s still on!’ We let off the vang, deepened up the sails and sailed off around the other boats. We went quickly from 4th to 1st primarily because we had changed gears quicker than the other boats.’

Every evening after racing, Jones downloads the day's data and looks for the key trends to emerge from the day. ‘Analysing the data enables you to figure out what sail trim configurations worked best resulting in new targets for trim guidelines, which the trimmers and driver can use to get the boat set-up back to the same place.’

But for Quantum Sails, the greater value is what comes when the regatta is over, as vice president of Operations and Quality Control for Quantum Sails, Andrew Scott explains. ‘When we’re designing sails, we calculate the aeroforces that a sail is going to produce and use Finite Element Analysis to calculate the strains, stresses and loads generated by the sails.’

‘We are able to take the stripe data of the actual flying shapes and overlay them with our design file shapes to further refine our shape files for the next generation of sails,’ says Scott. ‘It’s a very effective feedback loop that integrates nicely with Quantum’s own design software.’

The lessons learned from Quantum Racing’s success on the TP52 circuit trickle down to all of Quantum’s customers, says Jones. ‘The TP52 program is an ongoing R&D project that feeds back into everything we do for our customers.

'It’s where we trial new ideas for batten pockets, the detailing and finishing of the sails, and sail shapes of course. Once we’ve developed a fast shape through the whole VSPARS/iQ Technology process, we can rescale those same TP52 moulds to different types and sizes of race boats. So even if they don’t install VSPARS on their own boats, Quantum customers are still reaping the benefits.’