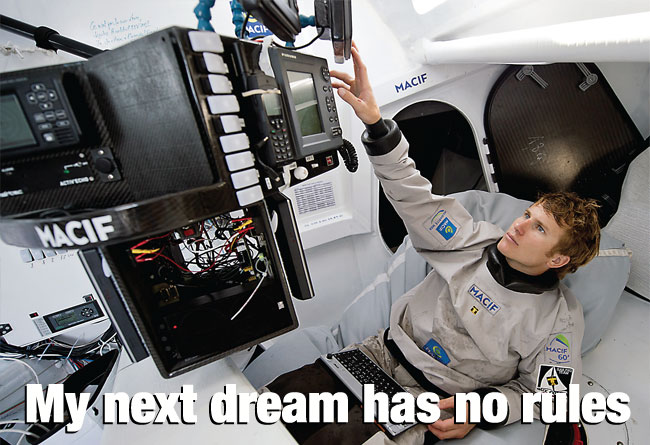 One word frequently pops up in a conversation with François Gabart: dreams. The Vendée Globe win gave birth to new ones. He talked to Øyvind Bordal about his dreams, and what he does to make them come true…

The Hotel Clarion Post in Gothenburg hosted the World Yacht Racing Forum in December, with a long list of high-profile sailors present. But there was only one superstar. Had they used a large, Hollywood- style neon sign above the entrance there’s no doubt about whose name the organisers would put right on top, flashing with large, capital letters: François Gabart.

Multi-talented
At the age of 29, Gabart won the Vendée Globe as a first-time participant. But his victory reached far beyond the Southern Ocean. With the air of a very young Robert Redford, the French sailor won even bigger in terms of global media coverage, and his voyage was followed by millions of fans. While fighting it out with Armel Le Cléac’h in the roaring forties, Gabart simultaneously uploaded more media content than anyone else in the fleet, and also used his training as an engineer to fix several failures in his boat’s complex elec tronics. The talk during coffee breaks at Hotel Clarion Post often drifted in the same direction: this is the man we’ve been waiting for. François Gabart has the qualities needed to carry our sport to a larger audience than we’ve ever had before.

Multihulls?
So when Gabart went on stage in Gothenburg to give the keynote speech of the conference people actually put down their smartphones and tablets, and stopped all attempts of multitasking. They did nothing but listen. No small salute in today’s world. From the stage the Frenchman revealed stunning news, with his almost shy but honest appearance: ‘I strongly believe that when you have a dream and you get the chance to live it, then your dreams feed new dreams. When I was sailing the Vendée Globe I was living my dream. And new dreams were born in my head. I said to myself: “You have to come back here, you have to sail around the world again. But this time in a big multihull.” So we will now launch a new race – a race with no rules… just big multihulls with one man onboard racing around the world.’

What does it take?
When we met shortly after the speech I had changed my plans. The theme of our talk was supposed to be solo sailing skills. My notes said something like: what does it take today to succeed as a solo or shorthanded sailor? I wanted François Gabart’s best tips and I wanted to know what he actually does, how his mind works when he’s out there on the oceans by himself. Well, we got around to that. Just wait and see. But first I had to hear his own description of this new, giant multihull race around the world… just announced from the stage. Was it really his own idea?