The final phase of the two-year transition to the ‘TP52 2011’ box rule has resulted in not only new boat designs, but some new thoughts on sail design as well. In previous issues both class manager Rob Weiland and designer Rolf Vrolijk have discussed how the lower overall weight limit, as well as separated keel fin, bulb and rig measurement, have had measurable effects on hull design and performance, with the overall effect being that the latest boats are parametrically closer than ever before.

With the world’s top inshore teams wrestling each other in Audi MedCup competition, this leaves sail design as one of the few remaining variables to explore for a competitive edge. So with this mandate, both North and Quantum have put tremendous effort into getting their latest ideas onto these platforms, with some interesting innovations as a result.

US-based North designer Chris Williams has been working closely with Australian Paul Westlake (aka Flipper) of North Technology to optimise sail shapes, with input from other designers as well, including North Sails Argentina designer Juan Garay. Flipper’s mainsail trimming role on the new Vrolijk-designed Azzurra has supplemented what Williams is seeing as a trimmer with the All4One team.

Also based in the US but a Kiwi by birth, Dave Armitage of the Quantum Sail Design Group has, along with Brett Jones, been responsible for creating the sail shapes that have kept the green team on the podium at virtually every event in recent years. With Andrew Scott taking the lead, Quantum have taken a cutting-edge digital approach to evaluating sail shape in real time using the VSPARS system developed by Dave LePelley at the University of Auckland... 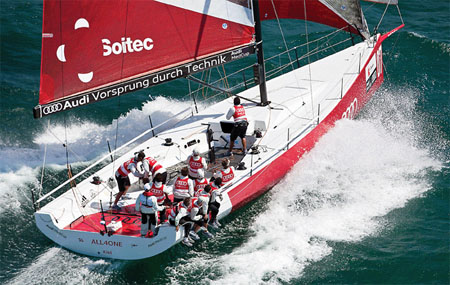