The only man to successfully challenge for the America’s Cup at the first attempt still loves his racing... as long as it is something fast. We talk to 2011 Bol D’Or winner Ernesto Bertarelli

SH: Congratulations on winning the Bol D’Or, it’s the sixth time you’ve come first but this time you had to wait eight years to win again...

Ernesto Bertarelli: Thank you, the last time Alinghi won the Bol d’Or in 2003 we were sailing Le Black, a 41ft Jo Richards and Sébastien Schmidt open multihull. Since then we have been racing our D35 one-design cat.

SH: What was the thinking behind the change in class?

EB: After winning the Bol d’Or three times in a row I decided to withdraw Le Black and, with a small number of local multihull enthusiasts, create a new class of identical 35ft high-performance catamarans. I realised that if we were not going to keep costs under control racing large multihulls on the lake was simply going to disappear.

SH: Was it difficult for you to put aside such a successful boat?

EB: Yes! Le Black was and probably still is the ultimate weapon on the lake! The boat was launched in 2000 as a result of many years of experimentation with the large 40ft multihulls on Lake Geneva. She is a very innovative catamaran with tremendous power yet light and rigid at the same time. We used aerospace materials throughout and the very best high-tech build techniques at Décision SA to build a unique boat.

SH: So why did you retire her!

EB: After winning almost every race for two consecutive seasons I realised my ­mistake! I had outspent the competition and did not have anyone left to race against any more. This is a lesson that I will never ­forget. For racing to be fun in a development class you still need to give as many owners as possible the chance of winning. 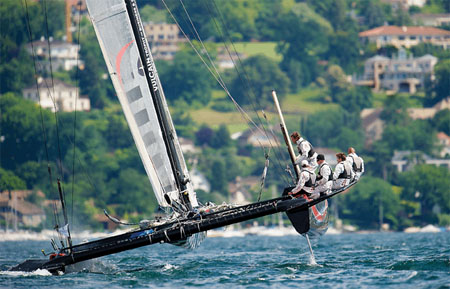