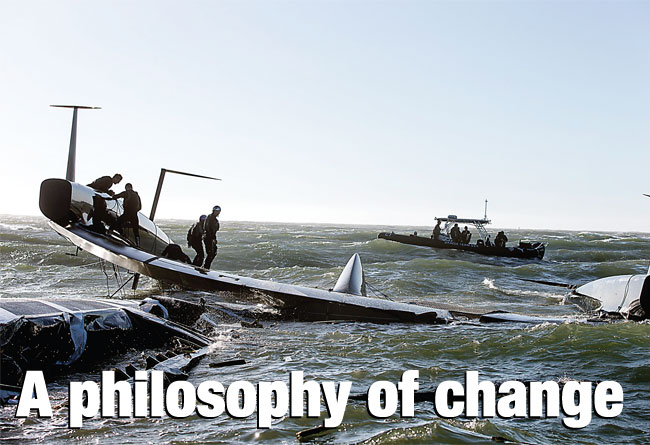 With setbacks large and small punctuating Oracle’s preparations in San Francisco, Grant Simmer was one of many in the team burning the midnight oil. He spoke to Blue Robinson about the slings and arrows of his ninth and most remarkable America’s Cup

Seahorse Magazine: What were your role and responsibilities with Oracle?

Grant Simmer: I was the general manager of the team, with specific responsibilities for managing the design team and the dayto- day operations. Jimmy [Spithill] ran the sailing team and I didn’t have a lot of involvement with them, just giving a hand when needed.

SH: Any hesitation about taking this on… jumping into a brave new world?

GS: Nope, no hesitation. Since finishing with Team Origin in 2010 I had just been doing some pro-sailing so I was looking for a project. Even though it was a fairly bitter America’s Cup between Alinghi and Oracle in 2010, there was a lot of respect for the people you were racing against. The structure of the teams was very similar, so I could step quite easily into the role at Oracle. Russell Coutts had been so busy with the 2013 event that he hadn’t had a great deal of time to manage the team – so they needed someone in that role.

SH: Which areas in the role were new to you?

GS: The technology and the boat were completely new to me. But that was one of the most exciting things about the role… the boats are fantastic machines and we certainly had our moments. Clearly we were behind ETNZ in our development right up until the start of the match and there are a number of reasons for that, one of which was we were playing catch-up from the day we launched boat one. Ultimately – and ironically – that was an advantage for us. Whereas the Kiwis went into the Cup pretty confident where they were with their boat, by contrast we had a philosophy of constant change. That played out during the Cup… fortunately the event lasted as long as it did, giving us time to evolve!