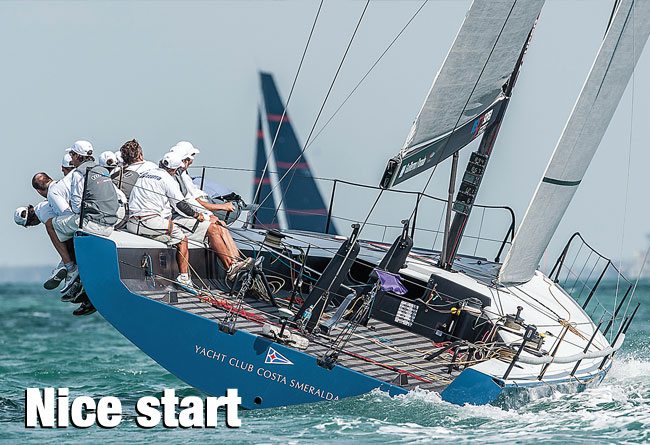 There’s little doubt the US 52 Super Series teams enjoyed Quantum Key West Race Week immensely! Good breeze, sun and temperatures up around 20°C… in January. What’s not to like? Key West is unusual in that the racing is top-notch and proper, yet the regatta maintains a unique laidback feel. Looking into the eyes of the TP52 owners I sense we will be back.

With Interlodge (Botín IRC52) and Rio (ex-Synergy, TP52) joining the four teams that brought TP52s over from the Med (Azzurra, Gladiator, Rán and Quantum), for both crews it was a case of wait and see to find out how they would fare in this experienced Med-based company.

Manouch Moshayedi had bought Rio only weeks before the event and his team has some catching up to do, for sure. But both team and boat have the potential and the 52 Super Series is a good classroom. Meanwhile, Interlodge put up a solid performance to finish an impressive second overall. The final two days of the event Interlodge sailed solid as a rock. Behind them Rán in third and Quantum in fourth both dropped the ball in race 9. Rán parked herself with a kite in the water, Quantum blew out her medium jib in race 9 and under event rules was not able to replace the sail for race 10.

In Miami we will also be joined by four or five HPR forties, for the HPR Midwinter Championship and once back in the Med we will again have the Soto 40s for their Europeans. We like to share our racetrack and 52 Super Series resources with these classes – all in the cause of high-level fast but fun racing.

The 52 Super Series ‘Media and Virtual Team’, small but beautiful, brought the Quantum Key West action live or nearly live to the various platforms we have nowadays. With Andi Robertson reporting live on the water and Dobbs Davis covering the action from the media centre we have the right mix of passion and knowledge to keep keen sailors glued to the screen.

We will bring all six Super Series events live this year, a good step on from the two we did in 2012. The short videos that we post on Facebook, even during the racing, are also proving popular. The future will, I hope, bring an even better mix of virtual and (near) live images. But what we produce right now cannot be that bad – Eurosport have recently asked to broadcast our material… which is both a compliment and also much better than us going to ask them!

But there is no complacency among owners and teams nor with those working behind the scenes to make the Super Series happen. One of the new roads for us to explore is HPR. The concept of HPR, to typeform toward a clear, achievable goal, a fast uncomplicated modern racer, shows more sense of direction from a racing perspective than other concepts claiming to rate everything that floats, or that aim to satisfy the majority in order to maximise the number of certificates.

HPR will not attract the masses, but it has potential to create boats that everybody likes to watch and dreams of owning: the Ferraris of the sea. Thus the potential to become the backbone of high-quality international racing. Meanwhile, the boats that HPR creates also appear to have the potential to be contenders in IRC and ORCi, so dual purpose and not useless after three or four years at the top level.

As such, with so many parallels to the TP52 Box Rule concept, HPR is interesting to explore in terms of possible synergy with TP52 and 52 Super Series interests. Whether this study, which will be started shortly, will lead to an HP52 Class and HP52 Super Series, as usual, only time will tell.

Right now we are very much looking forward to racing the worlds in Miami and then the four 2013 Super Series events in the Med: the 40th anniversary Trofeo Conde de Godó in Barcelona and then the Royal Cup Marina Ibiza, run out of the no1 spot in which to park your boat in the Ibiza high season! Come the end of July and we head to Spain’s premier international regatta, the Copa del Rey, and in September to the Week of the Straits in the emerald waters of Porto Cervo.

At some of these events we expect to see 10 TP52s racing. You are all invited… 52superseries.com or get a 52 and do what you most like to do.
Rob Weiland, TP52 class manager