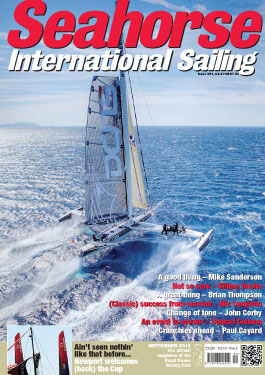 Up front and personal
However, master raceboat builder KILLIAN BUSHE is ‘somewhat’ less enthused… and not only for the more obvious reasons

A growing wave… with bumps
Up til now it has passed many of the keenest racers by, but the growth in classic competitions large and small – and in their competitiveness – has been little short of explosive. But it has not all been pain-free along the way. NIC COMPTON

A most remarkable man – Part II
Check out an Olympic class, skiff or Paralympic boat park and you will see the influence of FRANK BETHWAITE in almost every corner

World news
FRANCK CAMMAS in his own words, a fight for territory in New Zealand, PEDRO CAMPOS and team are underwhelmed by the big Volvo Race change, how Australia raised its Olympic game and those MOD 70 trimarans wow the US of A. DOBBS DAVIS, IVOR WILKINS, PATRICE CARPENTIER, BLUE ROBINSON, CARLOS PICH

IRC
Back in the major league again…

SuperSeries – Onwards!
The 52 SuperSeries is on the rise. We quiz ROB WEILAND on the secrets of its successful debut