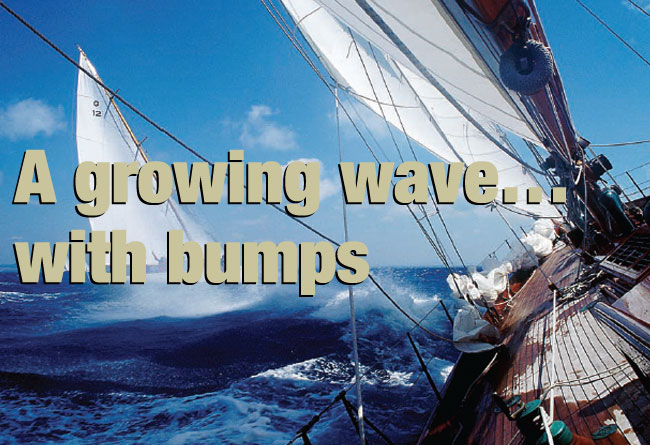 Later this year something extraordinary will happen: a collection of classic yachts will gather at Cascais for the second Panerai Transat Classique – a 4,000-mile ocean race from Portugal to Barbados. The exact number of boats taking part is unknown at this stage, but as we go to press the organisers are claiming ‘almost 40’ yachts have already signed up. The fleet will include many boats built in the 1920s and 30s – Moonbeam IV, Marianna and The Blue Peter have already committed – and possibly even a few centenarians.

For sailors used to racing on modern boats this might not seem much to shout about – after all, around 300 boats take part in the Fastnet most years, and a similar number are already signed up for this year’s rather more sedentary ARC Atlantic crossing. But the idea that there would be a substantial number of classic yachts capable of making such a voyage, let alone under racing conditions, would have seemed ludicrous only a very few years ago. It’s testament to the vibrancy and confidence that now exist in the classic boat scene that such a race can now realistically be contemplated.

The classic yacht movement owes a great deal to regattas. Back in 1981, when most of the old boats sailing today were still languishing in various stages of disrepair in forgotten creeks and boatyards around the world, it was a single race that gave birth to a legend. That was the year Jean Lorain and Dick Jayson decided to race their respective boats – one a ‘modern’ Swan 44 and the other a vintage 12-Metre – from St Tropez to the Club 55 restaurant on Pampelonne Beach, via the Nioulargue buoy a few miles down the coast. Thus was born the first major classic yacht regatta on the Mediterranean, soon to become known worldwide simply as La Nioulargue.

The event captured the public imagination because from the start it was as much about showmanship as sailing. Pride of place in the old harbour was always given to the classics, while the modern yachts that took part (in the spirit of the original race) were usually confined to the outer quay. As the beautiful people gathered on the quayside for their evening stroll, they were treated to a timeless and steadily growing gathering of immaculate wooden boats, with their acres of glowing varnish and polished brass. The view from the water wasn’t bad either, as the Provencal sun cast a warm glow on the cream and terracotta walls of the old town. It was a winning combination.