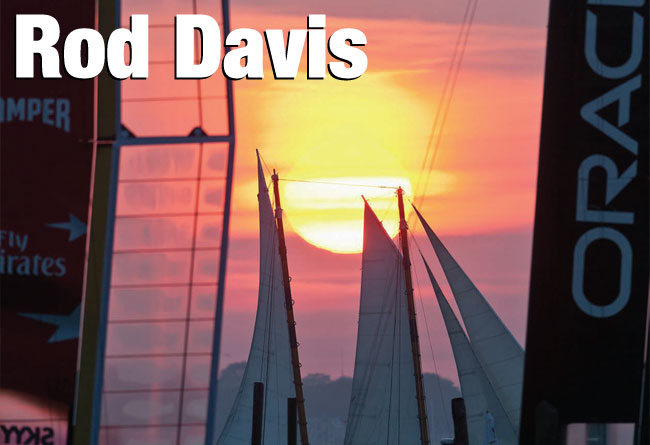 Back to the Candy Store

Newport, Rhode Island, has an indescribable, almost mystical feel about it. An America’s Cup history spanning J boats to 12 Metres, mansions with their expansive lawns running down to the water’s edge and hundreds of boats of every description on the water all make you feel like you have dropped into some kind of a time warp. Far away from a decade-long recession in the US, the government bailouts of Europe and the social media revolution, Newport holds onto its values of a bygone era. The people of Newport embrace all things yachting because it’s a fun thing to do. For those reasons and more: Newport, Rhode Island is the ‘real’ home of the America’s Cup.

My first major regatta in Newport was back when sails were white and clean. Clean as in no advertising cluttering the picture. America’s Cups, Olympic trials and several world championships later, the magic of the place just grew and grew. So, when the AC45s raced there last month, it was great to be back. They say you can never go back, so the worry was that the Newport I remembered would not resemble the one of today. On top of that, the new crop of America’s Cup sailors might not comprehend the bigger picture. By and large, the 2012 Cup teams’ earliest memories of the America’s Cup are from Fremantle in 1987. That’s not a fault, it’s just that Newport’s history in the America’s Cup does not affect them in any real way. Not that they realise right now. But like art, if you understand it, and place importance upon it, history has meaning.

A handful of people still in the game who did live through those days thus appreciate and value the history. By no coincidence, among those still at the cutting edge of the America’s Cup are Iain Murray, CEO and regatta director at ACRM, Paul Cayard and Laurent Esquier, respectively CEO and head of operations at Artemis Racing, Grant Simmer, general manager of Oracle Racing, Tom Schnackenberg, Artemis design and performance manager... and me (we don’t have titles at ETNZ!).

The changes in the game from the 1970s and 80s are so vast that it’s a waste of time to compare the two eras. It would be like comparing the 1987 All Blacks rugby team to the 2012 team. Don’t try, it was a different world and a different time.

Back in the 1980s the crews were in their 20s and were not paid. No wives and no kids. And very little experience for that matter. Truth is we spent a lot of time on the edge of mayhem. And loving it. Just soaking it up and making the most of the occasion, with passion and dedication.

Today the average age of the ETNZ sailing team is 40, all have families and the America’s Cup is full-time work. The passion and dedication are still there, in abundance, and so is the pressure of the professional world, along with a budget at least 35 times the size. The total budget of a 1983 America’s Cup campaign would not run a 2013 campaign for a month!

One thing both generations have in common is the seemingly endless hours of work. Some things change, some things never will! One ‘thing that never will’ seems to be the love affair that Newport has with all things yachting and its traditions. I thought it was just me, but the newbies to Newport, the Dean Barkers, James Spithills and Sir Russell Coutts, were all blown away by the ambiance of Narragansett Bay and the surrounding town. How could you not be?

In Newport every boat out there is gleaming, from the varnish work to the bottom paint. The fact that most of the boats had only recently been put in the water after a long winter break – one that obviously included a bit of a tart-up – ensured we saw them at their best. And we saw lots of them. So many that on the weekend we had to suspend our starting practice with Artemis because it just got too dangerous. Day sailors, racers, new boats, old boats – particularly old boats – all enjoying being on the water. Nowhere else in the world can you see classic 12 Metres like Weatherly, Intrepid, Nefertiti and American Eagles out racing every day. You could feel the pride that each and every owner had in their boat. No dungers that have been neglected for years.

Tradition... something that oozes from the timbers as you walk out along the long wharf that leads to the Ida Louis Yacht Club, a steady stream of boats sailing by lit up by the last shards of the setting sun. Suddenly the room goes quiet and everyone stands. That caught me flat-footed for a moment. Best follow suit… put my drink down, stand up and quietly wait for what happens next. Ahh… yes, I remember now, the lowering of the American flag at sunset. It’s an institution.

Given all the yachting history, tradition, pride and enthusiasm Newport has for sailboat racing, it did seem a little inequitable that a fantastically dedicated public were asked to pay $10 to gain admission to the AC village and watch the racing up close (they still came in their thousands) while in San Francisco admission will be free. Time will tell if the San Francisco public hold the Cup in the same regard as Rhode Islanders.

Which brings up an interesting topic. Is it better to be a big fish in a small pond or a small fish in a big ocean? Would the America’s Cup be better off in a place that it can dominate and be the centre of attention, or in a place where it has to compete for the public’s attention with baseball, football, basketball and all the professional sports and arts? Look back to where the AC has had a real impact upon a city, Fremantle, Auckland, Valencia – all places where the Cup was the king of the town, the talking point on every street corner.

By contrast San Diego was a dud (like that firecracker that you light, turn and sprint from, waiting for the big bang… but nothing but the soft fizz of a fuse) as far as the Cup was concerned. Came and went without the average man knowing or even caring. Not a criticism, just something to keep in mind.

In fact, Newport came close to being the venue of the 2013 America’s Cup, or so Oracle claim. Most of the locals believe it was more like sabre rattling aimed to get San Francisco off the mark. Regardless, everyone at this last America’s Cup World Series regatta fell in love with the setting.

Newport has to be in the top five places in the world for sailing. Let’s not argue on the best place and just agree it is in the top five. Long may the karma last!