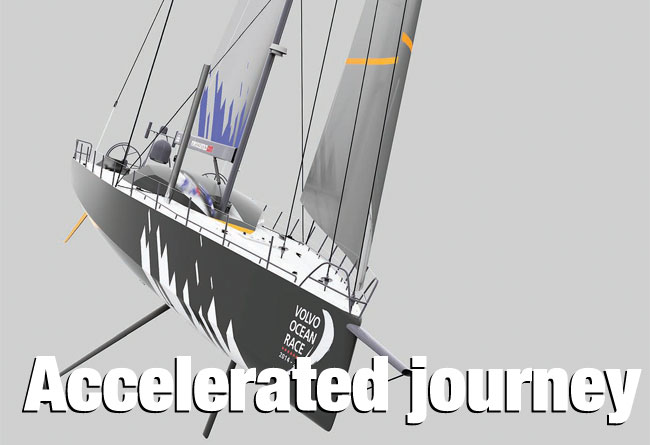 Most people were stunned at just how quickly the new Volvo Ocean Race one-design travelled from concept to tooling, but that is to underestimate the thousands of hours of preparatory work taking place behind the scenes. Britt Ward and the team at VO65 designers Farr Yacht Design expand upon an evolutionary tale...

In the lead-up to the ‘big’ decision on the future of the event the Volvo Ocean Race management team spent a considerable amount of time considering options for the future that would retain the race’s profile as the pre-eminent around-the-world yacht race while increasing the number of competitive teams entered. To achieve this goal the cost of mounting a competitive campaign needed to be reduced substantially. Several broad preliminary concepts were considered, including modifications to the Volvo 70 rule or freezing the design, development of new class rules, plus various one-design options including a multihull, a fixed-keel water-ballasted boat or a significantly smaller canting-keel design.

Ultimately, the cost of an entire Volvo Race campaign is influenced by many factors with the hardware only representing about one third of the total. Personnel costs for sailors and support teams are a significant cost centre and one that is not well addressed by the existing development rule framework. A one-design solution had the potential to create cost savings on a number of different levels:

The fact that the Volvo Ocean Race managed to secure funding to construct the tools as well as to fuel the actual manufacturing of the latest boats is also key, as it significantly improves the chances of getting more boats onto the startline. Historically the practical cut-off for when you have to start designing and building a boat has eliminated many potential late entries. Meanwhile, racing a secondhand boat in an open development class has also never been a particularly attractive option.

There is a balance to be achieved between reducing boat and campaign costs, while continuing to attract the best sailors, and maintaining the high level of public interest that the race has received to date. After much discussion among the stakeholders it became clear that the New Volvo Class (NVC) needed to remain a true ‘King of the Ocean’, retaining as many performance features as possible within the budget targets. While smaller or simpler boats can reduce costs dramatically, it was felt that this boat needed to be exciting to sail, and remain capable of achieving record speeds.