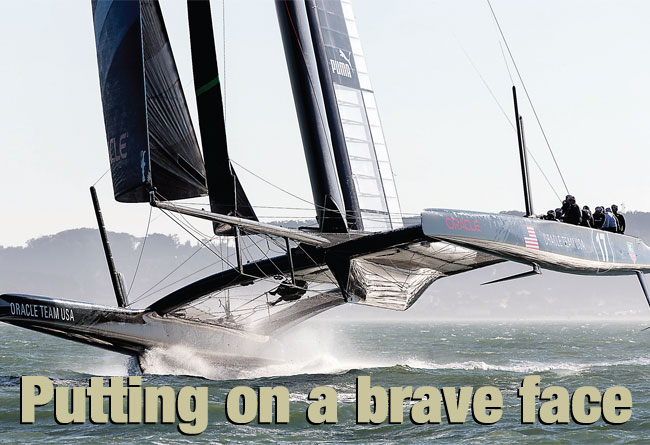 Stephen Barclay tells questioners he knows nothing about yachting, which may sound like a fatal flaw for somebody charged with marketing and running the America’s Cup, the sport’s greatest show on earth. As a New Zealander, though, he can scarcely avoid some connection with the sport and he acknowledges that his father-in-law did at least own a well-known classic yacht.

What he means, then, is he doesn’t know much about professional yachting at the level of the event over which he now presides. ‘It is all relative,’ he smiles. ‘But in this environment, whenever people ask I say I don’t know the front from the back.’

Barclay is almost as surprised as anybody else to find himself propelled from absolutely nowhere in the yachting world to presiding over its premier event. In five hectic years this transformation has been nothing short of a baptism by fire – particularly after he switched from Oracle Racing to become CEO of the powerful America’s Cup Event Authority blurring, as he went, those promised ‘neutral management’ boundaries. Indeed, there must have been times when he wondered whether his old university mate Russell Coutts did him any favours at all by drawing him into this often fractious arena.

In more recent times the vision expounded by Larry Ellison and Russell Coutts has been dramatically scaled back. The challenger fleet has dwindled to three, with Korea’s chances now all but written off. High expectations in the city have been downsized and Louis Vuitton, for 30 years the mainstay sponsor of the challenger series, is less than thrilled at the prospect of the smallest fleet in four decades.

To sum up, Ellison’s massive investment has created an exciting, if much reduced, spectacle but little return from a commercial point of view. Especially in the context of what is a nine-figure outlay…

At a speech in Auckland in mid-2011, when challengers were already melting away, Coutts made a telling comment. ‘Larry Ellison is not an easy person to justify failure to,’ he said. It was a sobering indication of the pressure to deliver a good event for the Oracle boss’s home crowd.