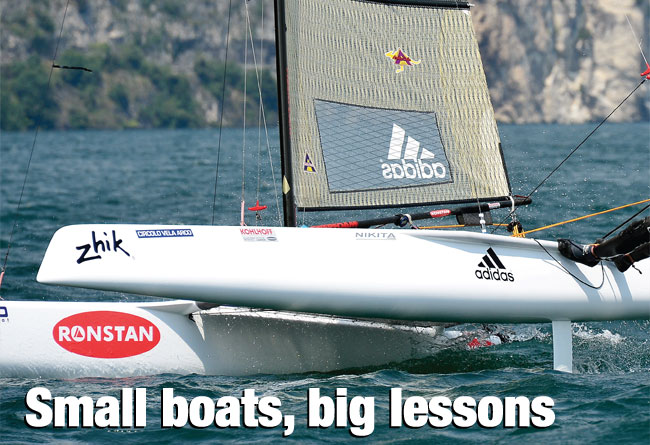 With an America’s Cup held in 72ft multihulls looming we have seen a dramatic increase in the attention being paid to multihull development in general – and one class in particular is thriving in the spotlight: the International A Class catamaran.

The ‘A’, as it is more affectionately known, has seen a big rise in both active participation and manufacturer interest, with increased production numbers and a parallel escalation in media attention. In contrast with some of the dramatically differing design approaches pursued by the current Cup teams, the last decade in the A has not seen any silver bullets in terms of design, rather a steady stream of small, affordable incremental improvements to platforms, masts, appendages, sails and technique that have all played a vital role in keeping the class at the forefront of performance multihull development. With two major international events annually, along with well-attended national regattas on nearly every continent, the access to consistent high-calibre racing has been a powerful catalyst for refinement and improvement.

While design tools such as CFD, hydrodynamic simulation and even wind tunnel testing have become accepted elements for high-performance yacht design, there are sailing characteristics of high-performance catamarans well beyond simple handling and manoeuvrability that as yet cannot be recreated inside any design program. Pitchpoles, ‘wheelies’ and leeward hull flight are three examples of what A Class designers are now faced with.

As with the scaled testbeds of the Cup teams’ modified AC45 and SL33 foiling cats, the consistent real-time testing that A Class racing has produced has been invaluable to catamaran design philosophy in general. While the A Class has seen its share of more radical design attempts such as wings, bow deflectors and full lifting foils the true cream has risen and there is now a small selection of platforms, masts, sails and foils that are consistently to be found at the front of the fleet.