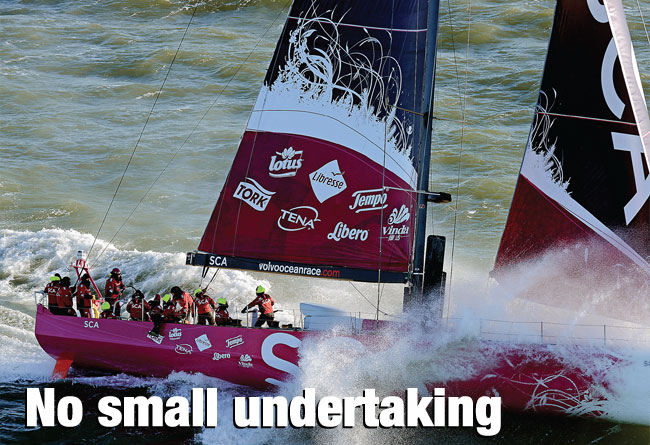 Atlant was first linked to an all-female programme in the 1997/98 Volvo Ocean Race with EF Education, the all-female team that was part of the successful Team EF syndicate.

The company was founded in 1988 by Richard Brisius and Johan Salen, who have been involved in five previous roundthe- world races as well as the Archipelago Raid, Oops Cup and the Scandinavian Formula 60 circuit. Their philosophy is quite simple: to partner companies in their projects and deliver a high return on investment both commercial and sporting.

When approached by Swedish-based group SCA, among the largest companies in the world in personal care products and one of Europe’s most profitable producers of forest products, about putting together an all-female programme, managing director Richard Brisius and team were fully aware of the challenges as well as the oppor tunities. ‘But the main consideration was the performance gap,’ he explains.

‘It has been 10 years since the last allfemale entry raced against the men, so we have a big game of catch-up if we are to bridge that gap. Therefore our main objective was to put together a programme that looked at every aspect in terms of making the learning curve as gentle as possible and thereby ensure that an allfemale programme is ultimately as competitive as their all-male equivalent.

‘It was absolutely key to establish at an early stage that neither SCA nor ourselves are doing this as a publicity stunt. The heartbeat of the programme is the drive to provide the structure to create a competitive all-female team in ocean racing. 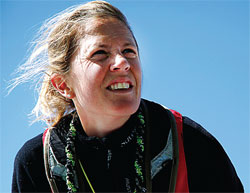 ‘I suppose our longterm goal is to see a female skipper win the Volvo Ocean Race. But the reality is that to complete this race, finish every leg and do so within the rules is an achievement in itself.’

But Brisius is also aware that the race remains essentially a male-orientated event: ‘We have been involved with six different round-the-world projects [including Intrum Justitia, Team EF, Ericsson Racing Team (05/06 and 08/09) and Assa Abloy].

‘For the Volvo Ocean Race to continue and to thrive it needs to appeal to an audience outside the traditional yachting arena. To attract more consumer brands we need to make our sport more attractive at a consumer level. This is a big ask, and one that I would hope that Volvo will embrace going forward if the race is to maximise its longevity.’

The reality is that Team SCA will probably be the only female team in the next race, and the reasons why raise questions that Brisius and his team are open to acknowledging. ‘The boats will still be extremely physical, so there is not a huge difference there compared with the old VO70s. The three additional crew members allowed to the girls evens things out a little in terms of sheer crew mass, but the guys will still weigh more.

‘We have started earlier than other teams because we have that 10-year gap to bridge. Our trainee candidates come from every area of the sport, from solo sailors to Olympic sailors, from accomplished match racers to adventurers. We have had hundreds of applications since we first launched the programme last August.

‘We have now whittled this down to a group of about 14 women, from which we hope we can select the basis of our crew. ‘We are not looking at any discipline in particular; we are looking at assembling a group of women with complementary skill-sets who can work together and create a professional competitive team. We hope that the result will be to eliminate the skill deficit that women have traditionally suffered from.

‘Interestingly, the international spread of the present squad seems to be concentrated in countries with strong Olympic sailing programmes. But this does not mean that in a team, offshore environment that will work. It is already a fascinating exercise.’

Brisius has recruited a team of five coaches to help with this selection process and with the management of the sailing programme: Magnus Olsson, Brad Jackson, Joca Signorini, Casey Smith and Martin Stromberg, who between them have the experience of some 20 round-theworld races to draw on.

‘We want the best people to do the job and we have no gender discrimination (other than the crew, of course). Around half of our management group members are women. We are also all very aware that to succeed we have to leave a legacy for women in offshore sailing; I would like to think that we could make this a tworace programme, but at the moment we are just looking to 2014-15.

‘The Volvo Ocean Race and everyone in sailing should be grateful that SCA have taken up this gauntlet. They have put their head above the parapet and are prepared to be counted, if you like.

‘Our programme is fairly flexible, but our aim is to have the basis of the team in place for mid-April, looking to have the complete team by the end of the summer. We also have a few other competitive races planned (though we have yet to officially confirm our involvement). However, they will be a useful benchmark as to how far we have come in our squad development.’

Brisius’s team have divided the initial potential candidates into two groups. The first group joined the boat in Southampton and sailed it to the team’s training base at Puerto Calero in Lanzarote. The second group is due to join the boat in mid-February, and will go through the same training and testing processes that will encompass sailing, fitness and medical evaluations.

The objective is that the nucleus of the crew will be able to be drawn from these first two groups. Initial comments from both coaches and management are positive. ‘We have been really impressed with the calibre of potential candidates,’ adds Brisius. ‘There are a lot of very good, natural female sailors out there and it is great that SCA have been able to give them an opportunity to be part of this project.’ Over the winter Team SCA acquired the VO70 that was previously Puma’s Mar Mostro as their training boat. Rebranded with new and striking graphics, this boat is obviously the core component of the group’s training programme.

‘If the girls can get used to sailing a VO70, then when we get our raceboat [VO65] in the summer we are hoping it will be an easier transition. The new boats are still going to be really hard physically, which is clearly one of the biggest challenges the girls will have to deal with throughout the race itself.

‘Aside from our crew selection, we are also looking at how we set up the shoreside element of the project. In particular, we are trying to resolve some issues on the matter of having shared services; while this makes absolute sense for specialist areas such as engine maintenance and specific rig maintenance, it makes less sense to us in a more general maintenance context.

‘While we encourage a reduction in costs, the concept of shared services also has to be balanced with a potential increase in commercial and sporting risk, which could possibly result in wider implications both for teams and for the race itself. However the race organisation is being very open about this and we are currently having a constructive dialogue with them in search of a solution that will be satisfactory to everyone.’

While these discussions continue the coaches and shore team will carry on putting the crew through their paces from the team’s base in Lanzarote. It is no surprise that Team SCA are following a tradition started by Ericsson Racing to use the island as their training base. The facilities and especially the sailing opportunities of the immediate area are excellent. ‘We can be sailing in offshore conditions very quickly. Plus the weather and sea conditions are consistent, so we minimise wasted time and are able to make the most of every minute out on the water.

‘We are all remaining very aware of the scale of the task ahead. In 15 months we have to create an elite offshore sailing team from scratch. But we are also lucky in that we have a huge amount of support to make that work. There will of course be the cynics, who say it won’t, but as we have said before, it has to work.

‘It has to work because this race, and our sport, need to appeal to an audience outside the yacht club. And by that I don’t just mean from a corporate and commercial perspective, but to a far wider consumer base. We need to convince the big product brands that our sport can talk to their consumers.

‘SCA are prepared to start this process and for that, as a sport, we should be very grateful.’