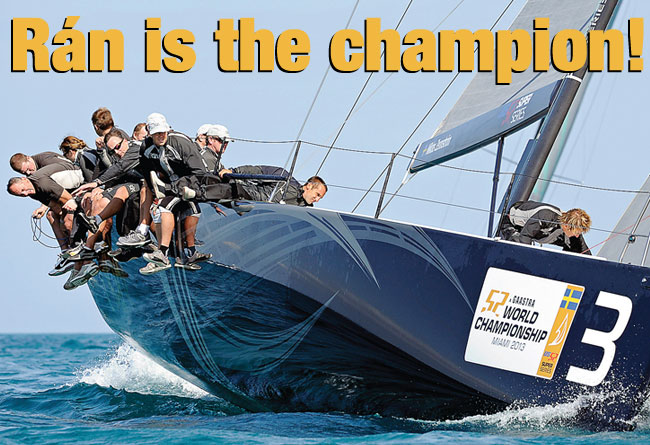 In the end only two points separated world champion Rán Racing and Quantum Racing in third place. And sandwiched in between them neatly – 1pt from each – was Alberto Roemmers’ Argentine/ Italian team Azzurra.

Even this close finish does not fully reflect all the drama of the final day’s racing in Miami (for that take a look at the footage on 52superseries.com or on Facebook). In fact, setting modesty aside, it was some achievement that our tiny 52 Super Series media team was getting footage online within minutes of the best action, with the subsequent somewhat more slick edited highlights packages contributing to the remarkable 10,000-plus followers this class has attracted. Not bad for our bunch of Flintstones.

But the real message is that on a landscape that remains short of proper grand prix racing, the 52 Super Series and the TP52 Class are offering fierce competition at the highest level plus good fun ashore in great locations.

Eight teams were present for the 2013 edition of the 52 Worlds, the oldest boat the 2007-generation TP52 Gaastra Pro and the newest the 2012 Botín design Azzurra. Gaastra Pro, not yet optimised to 52 class limits, lacked pace upwind in anything over 10kt, of which there was plenty in Miami. In close fleet racing, relying on corrected time will not dig you out of trouble, as the parallel-scored IRC results remind us. Exactly as it should be at this level; in close windward-leeward racing the only way forward for a team off the pace is to speed up your boat, something the class caters for with élan. Gladiator, born as the 2009 Artemis, for instance, now sports a 10cm deeper keel (draft 3.45m) and a 100kg heavier bulb than the class rule permits the latergeneration boats. And it seems to have done the trick nicely, with Tony Langley’s crew winning the fifth race to great applause.

For boats like Gaastra Pro and Vesper, if they are to regularly engage in the 52 Super Series, as we hope, this is definitely the way to go. Downwind, in fact, the older, slightly narrower hull shapes are fine, if not quite good. What helps more is practice… Vesper (the 2008 Botín-designed Quantum) in her current trim, rating 1.378 under IRC as against the later TP52s between 1.383 (Rán) and 1.386 (Gladiator), just got better and better throughout the series, her team not having raced together for some months.

From mid-series onwards Vesper’s finish record of 1, 4, 1, 4, 4 was fine indeed, while her overall real-time score for 10 races of 39pt was just 1pt more than her corrected time aggregate.

Worth noting too that in Miami every team was primarily ownerdriven, only Azzurra owner Alberto Roemmers Jr mixing it occasionally with his skipper Guillermo Parada. Meanwhile, Niklas Zennström, Alberto Roemmers, Doug DeVos, Jim Swartz, Tony Langley, Austin Fragomen, Manouch Moshayedi and Marc Blees were all clearly enjoying the racing as well as the social side of the event.

Looking ahead, there was encouraging talk about future 52 events and boat development. Everyone in the current fleet seems to share the view that racing with a decent number of boats is considerably tougher but far more pleasant than pot-hunting on your own. All also accept that this requires give and take from both sides of the Atlantic; so travelling with boats and teams to meet in the race hotspots is seen as necessary at this stage.

The positive upshot is that the four teams that shipped to the USA from the Mediterranean for the US 52 Super Series will return six-strong for the four Med events. And a strong return to the US at the end of the European season is very much in the making.

Aside from the schedule there is a healthy consensus against experimenting excessively with boat optimisation. A few improvements for better ‘streamlining’ under IRC are being studied, while looking further ahead Marcelo Botín and Rolf Vrolijk have also been tasked with investigating how the current 52 fits in with the nascent HPR system… Plus how, in time, both HPR and the TP52 Class Rule can perhaps be streamlined to embrace as many boats as possible under the HPR umbrella.

The TP52 and 52 Super Series are here to stay. And, as always with our happy and steadily growing band, evolution not revolution is the best way forward.