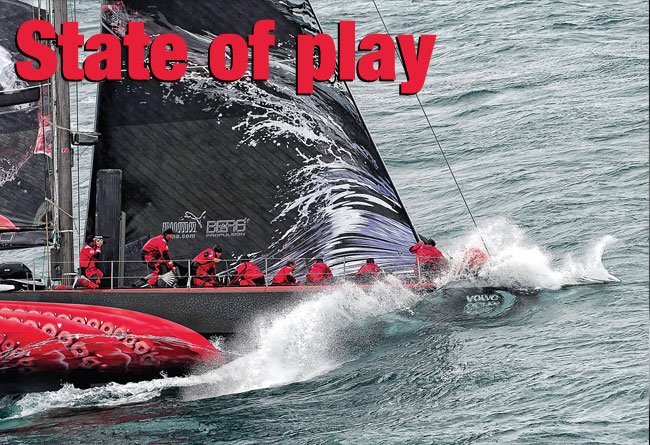 Knut Frostad: The good news is that we are working with a bigger group of prospective teams than last time. We obviously have a large number of teams that are interested in doing the race – that’s always the case with this event. But we operate our own small, hand-picked list, sometimes reviewed daily, of the projects that we really believe in, either because they have a track record of making it in the past or they have a strong lead in terms of a potential sponsor. That list comprises around 15 teams with whom we are working on a regular, ongoing basis. Those teams are not announced, of course, and are at various different stages of funding. Some are well advanced, some are still quite early. But I regard it as a positive that we have that many groups and that many people working hard to establish a team for the next race.

SH: And you have three or four teams already confirmed…

SH: And how are your plans for cost reduction working out?

Top: not for the faint of heart. Onboard media crew need to know exactly what they are getting into… Puma media crew member Amory Ross does his job (at left) while his shipmates get on and do theirs.
Below: man on a mission – Volvo Ocean Race CEO Knut Frostad is pulling no punches as his team work hard to get a full quota of new VO65s to the line in 2014 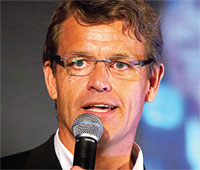 KF: Well, we know about the boats, but the big change coming together right now is ‘shared services’. That’s an element that we only started moving on once the boat itself was underway. I see shared shore resources as a big driver of the change to one-design; what we have been doing is unravelling the support aspects in the context of a one-design package and then reducing cost and head count wherever possible. Spares are one example: with a pool of spare parts there is no longer a need for each team to buy a stock of expensive reserve components many of which will never be used.

But sharing human resource is just as significant as spare parts. We will assemble a pooled shore crew to reduce each team’s headcount, and have hired Nick Bice – who’s been involved in many of these projects – to manage it.

For the next race there will effectively be a one-stop shop for all the teams, to oversee the maintenance programmes of the boats, spare parts, gear servicing and so on. Involved in all this, of course, are the suppliers to the fleet – which is only feas - ible because all the onboard equipment is now identical. The suppliers will also now be closely involved with all the teams’ service and maintenance schedules.

I don’t think this has ever been done in sailing at this scale, where you share the resources on land. And the more work we do in this area the better it becomes.

KF: We’re still in the same ballpark overall as this shared resource was already factored in. The typical campaign budget we targeted remains around 12 million euros. Some teams are using a slightly lower estimate, say 10-11 million euros, and others expect to spend slightly more, maybe 14 million euros. But there isn’t the big budget range of previous races. A lot depends on when a team starts – and when it starts hiring. Teams will still have shore personnel of their own, but the numbers will be much smaller. We’ve made a real dent in those costs.

SH: The manager of the SCA Team, Richard Brisius, initially had reservations about shared support…

KF: In the beginning there were a lot of uncertainties but now the programme is clear he is happy. Every team has a different situation, but they will all save a great deal of money compared to previous events. What is clear to anyone is that if you are working on doing this race on a relatively low budget then the support package is a no-brainer.

SH: When does the first boat go afloat?

KF: Boat 1 will launch in August. There are two steps to the launch, the first being when the boats are ready for painting for the sponsor. The second is when the team decides to put the finished article in the water. The first date is coming up for boat 1 in July. It will be trialled the following month before the official christening in the Autumn – we’ll let everyone know exactly when that takes place once it’s confirmed.

SH: Who gets which boat?

KF: The order of delivery is something we are careful not to publicise… Some teams who have yet to announce have already booked their boat while others who have announced are still working on the boat contract!

SH: And is there anything serious in the talk of an Alinghi programme or has this ‘gone public’ without Ernesto [Bertarelli] actually knowing much about it…

KF: I don’t think it’s as far advanced as some people would like you to think! There is certainly mileage in an Alinghi entry but it’s far from the done deal that was reported in the sailing press. Alinghi is one of many projects that we are working with.

SH: And interest from previous skippers?

KF: We have some of the previous groups, like the previous Spanish project and Team New Zealand, looking at the next race. I would say at least four of the last skippers are very much involved today. That’s positive. Then we have the new names, which is crucial because we are working hard at encouraging a new breed of sailor into the race. The sport needs this and so does the Volvo Ocean Race. It’s been a strategy of ours for some time to get the younger sailors into our event. What I can say is you will see more new names in the next race than in the previous one.

SH: What about the possibility of private entries…

KF: There are a couple of private owners in discussion with us. Not necessarily to do the whole campaign but definitely to be involved. That reflects what you see in sailing generally; as the sponsorship market gets tougher, privately funded sailing is doing very well.

SH: And how much progress have you made in terms of data sharing, especially around a failure?

KF: In the 2014 event all the data recorded on the boats will come straight to us. As we have access to this data we will then have the opportunity to share whatever is good to share. There’s a lot more data being collected on these boats than was ever the case in the past. So between the manufacturers, the teams and ourselves there will be an open process. That is already decided.

SH: So often in this race we have seen teams get their boats through training, only to have something break on leg one. With the first boat out, are you keen for the team – whichever team that may be – to get out there and try to break it?

KF: Yes and no. We are not going to try to break boat 1 because the first boat has to be identical to boats 2, 3, 4 and 5 onwards. So if there is a situation where we find out something on boat 1 that needs changing for boat 2, then we also have to change it on boat 1 as well. If there’s anything improved on any boat it has to be improved on every boat. That said, we have put an enormous amount of time and effort into making sure that boat 1 is the ‘best’ boat it can possibly be.

They must all be identical but there have been more hours spent on that boat, more testing during the build and so on. But everything we have adjusted during that process will then go into the following boats as well.

The boat concept is designed around being completely successful from day one. We have spent much more time on these boats than before. I believe that, plus the higher safety factors used compared to some of their predecessors, will pay dividends in terms of reliability.

It’s important to emphasise that boat 1 is not a prototype. It’s a full raceboat. That said, obviously we will be recording everything we can from that boat. Boats 1 and 2 will launch pretty close to each other – in fact, the three first boats are now all in production. It’s a tight build schedule with big overlaps between the boats. Before boat 1 launches we will have started boat 4.

KF: Our objective is eight boats and that’s what the project is designed around. We can build up to two more and we can also, of course, build one less if that is the case.

SH: What about the recruiting of onboard correspondents…

KF: That’s been interesting! We obviously took a different approach from the last race. We are now more actively involved in that process, to ensure we get the best possible people, by qualifying whoever is onboard in terms of editorial ability. We’ve had a huge number of expressions of interest – more than 2,000 at the last count – which is pretty amazing.

Some of them are not really ‘relevant’ to us, but there are others who come with terrific credentials in terms of awards for journalism and media work. What we have to improve in the next race is the quality of the journalistic output off the boats. It’s not so much about the TV shot any more, or the angle of the camera, now it’s all about the story and that depends entirely on journalistic skill.

It’s an interesting process, because however good the guy is at telling a story, he – or she – must still report to the skipper. They’re still onboard a boat on the ocean – and normal rules apply. So at the same time as we want to see excellent journalism coming off the boats, they still have to survive nine months in often unpleasant conditions.

SH: What about rotating correspondents?

KF: We discussed the option of alternating people, but currently we are aiming to have the same person stay with one boat for the whole race. The main reason for this is that we are concerned about changing everything to do with the race in one go… This is not about changing people, it’s about generating excellent stories.

That person still has to be part of a team and bond with the other guys onboard and that takes time; that’s not easy if the face keeps changing. Even though you can be a journalist and still cover a story as a fly on the wall, this particular fly on the wall has to survive onboard for more than 30 days at a time.