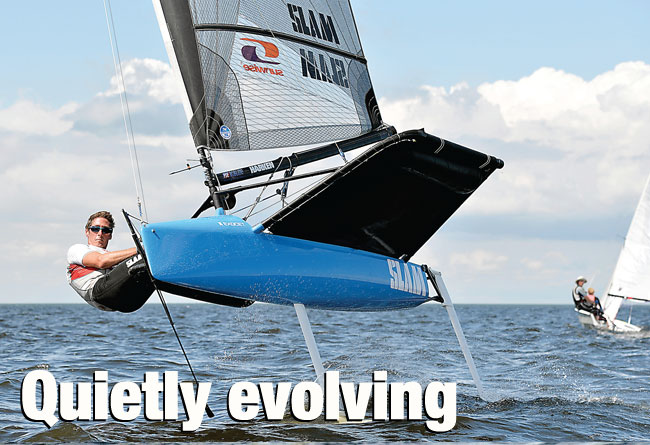 Outside the Olympic fleet the International Moth World Championship has become one of the most competitive small boat regattas on the calendar. Come this October and numerous Olympic medallists will be flying to Hawaii to compete in what promises to be a spectacular 2013 world championships, including 49er Olympic champion Nathan Outteridge who will be fresh out of his America’s Cup duties for Artemis Racing, as skipper of the Swedish team’s AC72.

Outteridge won the Moth worlds two years ago at a windy Lake Macquarie. Unable to attend last year’s regatta at Lake Garda, fellow Australian Josh McKnight sailed to a surprise win at his first overseas regatta, taking the world title at the age of 21. McKnight is aiming to defend his title in Hawaii, although he still considers himself the underdog compared with the likes of Outteridge, 2009 champion Bora Gulari, 49er Olympic silver medallist Pete Burling from New Zealand, and McKnight’s own training partner Scott Babbage, who was runner-up in Garda.

Two years ago a few solid wing rigs appeared at Lake Macquarie, with former 49er world champion and Olympic medallist Charlie McKee showing occasional bursts of speed, but nothing to seriously threaten the status quo. The arrival of the wing rigs did, however, prompt a good deal of controversy, with sailors worried that they were about to enter a much more expensive arms race in what is already an expensive class.

Some argued that the wing rigs that showed up at Macquarie were never classcompliant in the first place. Designer of the Exocet Moth in the UK, Kevin Ellway, comments: ‘At Lake Macquarie the wing sails were multi-element aerofoils, a front wing and a back wing, with a slot between the two. The purpose of the slot is to produce higher maximum lift before the rig stalls, but the Moth rule excludes a boat from having a mainsail and a jib, so that’s a multi-element airfoil. That ambiguity in the rule has now been cleared up. You can have a solid sail, but the flap has to stay attached.