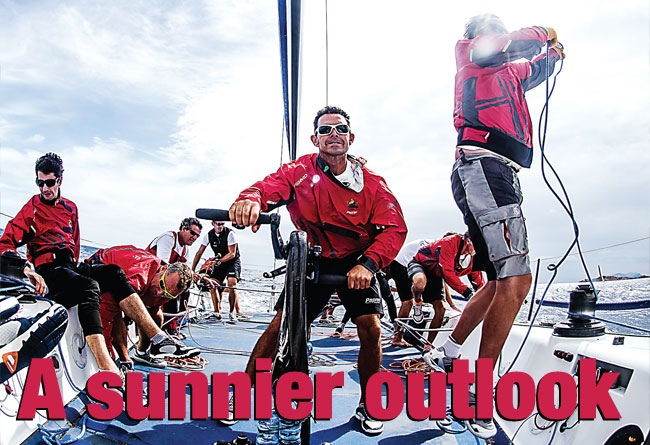 Nine 52s are sitting at the dock at the Yacht Club Costa Smeralda ready to start the final event of the 2013 52 Super Series season. Without a doubt it is the strongest fleet of recent years, certainly since the Audi MedCup imploded. And there are smiles all round.

The Copa del Rey in late July or early August is usually where future plans really have to gel, but by the last regatta of the year the hard reality – where each team will finish overall – cannot be sidestepped. Too often there are owners for whom the difference between pre-season hopes and the end result is too much and some will drift away and move on.

But this season has been exceptional. Quantum Racing may have won three out of three regattas but that is only a small part of the 52 Super Series story. All the way through the fleet the owners and their crews really have had fun and most just want more.

The final regatta sees three boats fighting over fifth, sixth and seventh places with just 1.5pt between them. Over the season the two American boats, Manouch Moshayedi’s Rio (ex-Synergy), Austin and Gwen Fragomen’s Interlodge, and Ergin Imre’s Provezza have all had their moments of glory, wins and second places, but they have also all thoroughly enjoyed battling with each other in Barcelona, Ibiza, Palma and finally here in Porto Cervo.

And so with happy owners then the future does look reasonably bright. But the impetus is still relatively fragile and needs to be very carefully nurtured. Class manager Rob Weiland may be one of the tallest men in Holland but he runs the fleet with a surprisingly light, deft touch. And it is the human touch, gently managing owners’ expectations and ensuring they are happy – or at least have their unhappiness put objectively into context – which is a key component of the current success story.

The 52 Super Series is as much about the teams for whom five or 10 new sails a season is realistic investment as the top all-pro teams who build 30. Lose them and the circuit will stand still in 2014 when there should be every chance of two or three new teams joining in.

Meantime, the formula is working. Owners and teams certainly enjoy the mix of venues that 2013 offered. More often than not that is being part of a major regatta such as the Copa del Rey or Barcelona’s Conde de Godo regatta, but Ibiza as a standalone regatta worked and was popular as a step off the beaten track.

The mood is still pretty much unique and most importantly the owners are in control of their destiny. The fights on the water are intense and longlasting but the ambience ashore is relaxed, informal and very friendly. At least once at each venue the owners get together and enjoy a sociable evening together.

The marketing of the circuit also seeks to be as inclusive as possible. The stories are not just about the excellence, the investment and the superstars, but seek to reveal how the lesser-known or new owners step up to the plate and enjoy pitching themselves against America’s Cup winners like Ed Baird, Juan Vila, Jordi Calafat et al.

It is a significant investment for the owners of the circuit, developing a package that includes live racing coverage with virtual eye tracking and on-the-water commentary, plus TV and video output that is fast, creative and interactive.

The numbers taken from the social network also reflect a strong and growing audience, an essential factor in developing the circuit. Presently there is just one de facto commercially backed team in Quantum Racing, but it is important for the 52 Super Series that the marketing mix will support other sponsored or partsponsored teams, while the existing core of private owners also enjoy the global profile generated.

If there is a question mark at the moment it is if the American owners will return to race in Europe next year. Four regattas in Italy and Spain have been a big commitment for owners and crew. They will evaluate and draw their own conclusions, but certainly in terms of enjoyment and satisfaction the Rio and Interlodge teams have had a ball, both performing ahead of their expectations for a lot of the time.

Meanwhile, we are receiving serious enquiries and interest from more European owners looking at 2014 with the possibility of a third Italian boat joining in the fun for some events. TP52 class manager Rob Weiland reflects: ‘We are very careful that this circuit does not burn out owners by placing too much pressure on racing the whole circuit. It is not all or nothing and, for example, I was very upfront with our American owners to perhaps just do a couple of European events to find out what it was like.

‘Similarly, we never want to curtail ambition. Our philosophy is to have a full range of rewards and to reflect the mix that we have, owner-driver, pro drivers, amateur drivers. It is tough and the best man wins and our owners like that.’

By nature conservative, Weiland is never one to over-egg things but he is now genuinely confident that 2015 might see as many as 10 new 52s with two or three of the latest stock modified.

Without doubt there is today a good longterm outlook for the 52 Super Series but 2014 may yet be a year of consolidation.