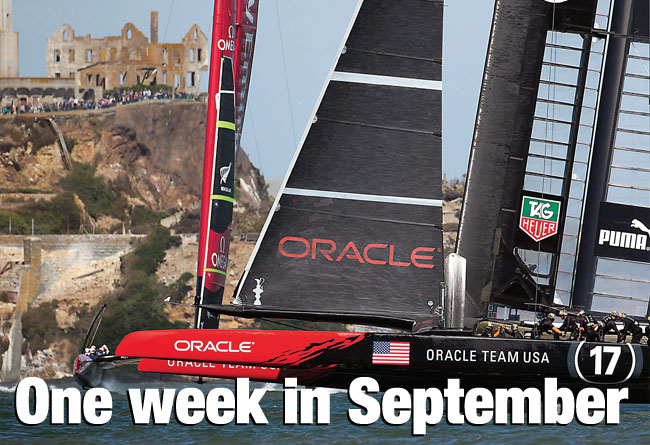 A lot has been written about the reasons for Oracle Team USA’s dramatic turnaround at the 34th America’s Cup… some of it true. We talked to those on the inside to get a more accurate picture

Many rumours have been circulating concerning OTUSA’s pitch-control system, some very creative postings indeed, a lot of wild concepts and interesting names such as ‘Herbie’, Stability Augmentation System (SAS), and so on. However, as is often the case, the reality is considerably more prosaic and the solution pragmatic.

Back in June we were still clearly behind ETNZ in gybing proficiency, and as our crew battled to improve their gybes it was quickly recognised that to achieve consistency we needed to improve the existing pitch-control system so that it would provide repeatable pitch increments every time the control button was pressed.

The main limitation of our pitch-control system at the time was that the pitch increment was very dependent upon the ratio between pressure on the cylinder and drag load on the board; so that it was very difficult to predict how much the board would move at different stages of the gybe due to the varying drag. The primary goal of the new system would be to increase stability during foiling and more specifically to improve the reliability of the foiling gybes with the objective of reducing the losses from 150m to less than 30m.

The new pitch-control system, designed by electronic engineer Eduardo Aldaz and mechanical engineer Dimitri Despierres, is in principle a position system that uses mechanical feedback – hardly a 21stcentury concept… The main challenge was adapting the concept to the AC72 environment. By 22 June the task was actively in hand: design the system and bench test it prior to installing it on the boat to minimis e the risk of losing sailing days.