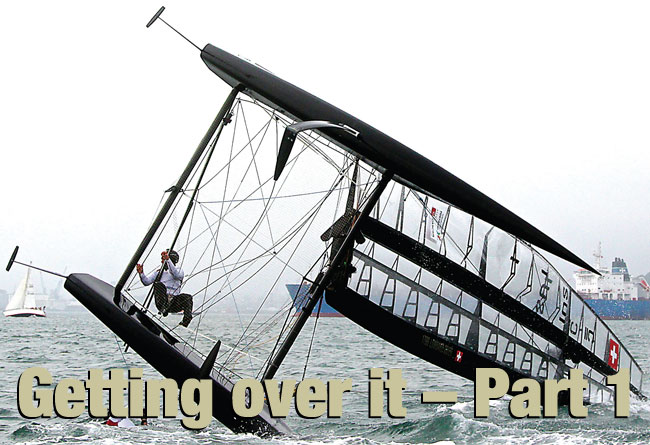 Little America’s Cup champion Magnus Clarke reflects on a physical time trying to defend his title on the breezy waters of Falmouth, England

Finally I have begun to recover from our third International Catamaran Challenge Cup (ICCC), held this year in Falmouth late-September. My fellow Canadian and C-Class helmsman Fred Eaton and I had both anticipated stronger breezes than usual and we were not disappointed…

At no time in the history of the class have we seen such a massive jump in performance of the boats within a single design cycle. Nor have we ever witnessed a collection of C-Class cats of this size.

As with the America’s Cup, this year the biggest development has been the use of foils for flying the boat or to achieve a very high lift fraction. In addition to flying, in particular downwind, the foil packages have allowed the boats to be pushed harder in adverse conditions, with considerably less fear of pitchpoling. Between the effects of stabilising the platform or flying it completely out of the water, we have seen an incredible jump of 50 per cent in peak boat speeds and a 33 per cent or more jump in VMG off the wind – and all over just the past three years.

Other major technical developments this year that showed promise included the end plating of wings to platforms, aero - dynamic fairing of platforms and canting wings, as well as TPT technology making a major showing in fabrication.

The racing conditions fluctuated between too much wind or not enough, with healthy doses of fog thrown in for good measure. As the C-class has a limit of 20kt TWS for racing, we lost a few days to conditions that were simply too fresh for the fleet. We also lost some days to extreme fog and lack of breeze, but we packed in many races in the remaining schedule.

Groupama, skippered by Franck Cammas, won both the qualifying and the final match-racing event… convincingly. He and his crew, Louis Viat, lost one race to a man overboard incident where they also suffered some breakdowns, their only other loss being to the venerable Canaan, the 2010 ICCC winner. This was in quite light airs when Billy Gooderham used his extensive light-air experience and everything that classic Archimedian C-Class cats could offer to sail around Groupama in less than 5kt of breeze. The Swiss Hydros team, comprising two identical platforms and wings with slightly differing foil details, were second and fourth respectively in the qualifiers, with Fill Your Hands (FYH), our latest Canadian boat, slipping in to third place in the qualifying series.