Winning out the box 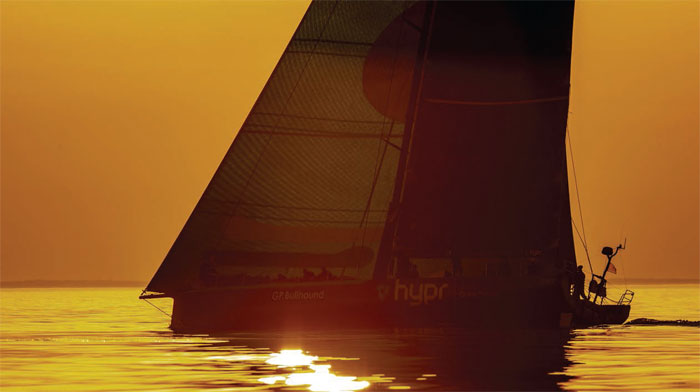 The first Baltic Sea Race which took place this summer was an instant success... not so much a classic in the making but a classic already

The idea of a new 635-mile race in The Baltic Sea was the brainchild of the Ocean Racing Alliance. At the core of the Finnish organisation are three passionate RORC sailors: Jan Paukkunen, Sakari Kalske and Ari Känsäkoski, who have all competed in the Rolex Fastnet Race and RORC Caribbean 600. ORA proposed a race, starting and finishing in Helsinki, and approached the Royal Ocean Racing Club to organise it.

On 21 July 2022 that idea became reality when more than 200 sailors including all of the ORA founders, crossed the start line of the inaugural Roschier Baltic Sea Race. Sailors from 18 different nations took part. Teams from Poland, Germany, Sweden and Finland won honours in the race, with a fairy tale overall victory for the smallest boat.

Deciding on the course for the race required complex analysis with the objective of producing a safe and challenging race. Generally, the course is an anticlockwise circuit of the Baltic Sea with the rarity of rounding three lighthouses as well as the Swedish island of Gotland. The proximity of land at all of the marks of the course provided strategic options and the lack of strong tides prevented the course from becoming one-sided.

Main picture: the VO70 GP Bullhound was third to cross the finish line of the Roschier Baltic Sea Race. High pressure and light winds dominated in this inaugural edition of the race.
Below: two of the organisers, Finnish RORC / ORA members Sakari Kalske and Ari Känsäkoski 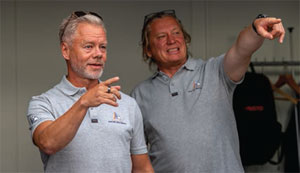 The northern hemisphere had one of the hottest summers on record and as with many sailing regattas, high pressure dominated the Roschier Baltic Sea Race. This weather scenario produced a number of light wind restarts during the race. With winners being decided under the IRC Rule, a reason first for such a high-profile race, the results couldn’t have been close for such a diverse range of boats and conditions. Ultimately, a fast downwind component, on the final leg to Helsinki, gave the smaller boats the final twist in a highly competitive race.

Finnish H-323 Silver Moon II, skippered by Salla Kaven won the 2022 Roschier Baltic Sea Race having scored the best time after IRC correction. There was a standing ovation for the Finnish amateur crew as they received the Baltic Sea Race trophy. Since they were children, the Kaven family have raced the 9.9 metre sloop on Lake Päĳänne in Southern Finland. In the past, Silver Moon had won many local races in the Baltic, but to win against professional international competition, racing modern offshore boats was an impressive victory. All of the Silver Moon crew work in social care; a teacher, a nurse, an ambulance driver and a firefighter. The crew of Silver Moon II: Salla Kaven, Heidi Ekholm, Kari Itkonen, Jorma Kaven, Jouni Kaven.

‘I am speechless, just so happy, we never thought we could win this race. It was great sailing, and everything went well, but even when we crossed the line, I didn’t believe it,’ says Salla Kaven. ‘The message to all the amateur sailors out there is - you can do it if you want to; do what you love.’

The race for line honours was constantly swapping between three teams: VO65 Ambersail 2 skippered by American Clarke Murphy, VO70 GP Bullhound sailed by Per Roman, and I Love Poland. All had victory in sight during the race, but in the final few miles, an astonishing light airs battle saw Tilmar Hansen’s German TP52 Outsider catch up 30 miles to join the race for line honours. I Love Poland crossed the finish line just 700 metres ahead of Outsider after 72 hours of racing. GP Bullhound was less than an hour behind. Ambersail 2 finished fourth, after at one stage having an 18-mile lead.

I Love Poland, owned by the Polish National Foundation and sailed by a young crew, skippered by Grzegorz Baranowski, crossed the finish line to win the Bobby Lowein Wheel for monohull line honours. The elapsed time of three days, 27 minutes, 37 seconds is the monohull race record.

‘The plan was to fight to the end and it was exactly that. There were a few wind holes, but we crossed the line first and we are delighted. When I look at the names on this trophy, we are so proud that ours will go with them. I am even more proud of my young crew who are trying their best to go forward. Thank you to the organisers of this race, it has been a privilege to compete in the first Roschier Baltic Sea Race,’ says Grzegorz Baranowski.

The Hamburgischer Verein Seefahrt (HVS) Carkeek 47 Störtebeker was skippered by Torben Muehlbach for the race. The young German team came so close to winning overall but in the end came third. Störtebeker did win IRC Zero, beating Tilmar Hansen’s Outsider and the largest boat in the race, Kenneth Bjoerklund’s CNB 76 Enderpearl. The HVS was established in Hamburg, Germany in 1903 to develop young sailors in offshore racing.

Below: Helsinki is the start and finish of the 635-mile race.

‘Everyone on board learned more and that was our goal, and we are so proud to have beaten the famous Outsider team,’ says Torben Muehlbach. ‘This new course is very interesting with many different conditions. It is so nice to rely on the RORC to organise the race, we have complete confidence in their management. Above all we had fun and that will continue for the HVS.’

Teams from Sweden, Finland and Great Britain filled the IRC One podium. Swedish Farr 400 Wetjob, skippered by Niclas Heurlin was the winner. Arto Linnervuo’s Finnish XP 44 Xtra Staerk was second and the first boat from Finland to cross the line and Ed Bell’s British JPK 1180 Dawn Treader was third.

‘This is our home turf and RORC organises great races so that is why we jumped on the train from the beginning,’ explains Wetjob’s Niclas Heurlin. ‘We were incredibly happy with our win against really good opposition. For us this was a very long race; 650 miles is a challenge, so that was inspiring.’

Below: the course takes the fleet around Gotland and back to Helsinki. 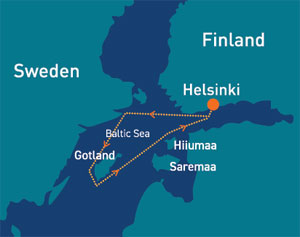 ‘I am really proud of the Xtra Staerk team for being the first Finnish team to cross the line,’ says Arto Linnervuo. ‘This race has attracted international teams, that takes Finnish offshore sailing to a higher level and that is my aim. The race helps the whole offshore racing community to thrive in the Baltic and we are all better together.’

Paer Lindfors, racing with Nadine Kugel, was celebrating his birthday as Team Mobline finished the race winning IRC Two-Handed . The 33ft sloop was designed in 1981 by Peter Norlin. About 500 have been built and there is an active Albin Nova Class in Sweden. The Albin Nova is not designed to any rule, just as a perfect all-round cruising boat; the boat has clean lines with no strange features. The design sails well in light and heavy wind.

Below: the Swedish Farr 400 Wetjob, skippered by Niclas Heurlin was the winner in IRC One 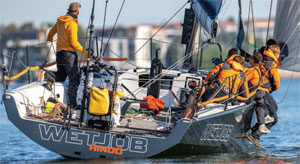 ‘It was a great race with fantastic conditions to the finish,’ explains Paer Lindfors. ‘During the last night we had our big spinnaker up which may have been too much sail, but it held and Nadine scored the topspeed record. Helsinki is a fantastic city with great cafes and restaurants and the race itself is a great course. Starting and finishing in Helsinki you go straight out to the open ocean. The communication with the race management team was perfect. We would definitely encourage other teams to come to race in 2024’.

RORC race director Chris Stone said after the race: ‘The Baltic Sea can throw everything at you and safety is always a first stop for any RORC race. Everybody got home safely with no problems at all; that is always the best outcome. A lot of thought went into the course and this time, the back-markers had 300 miles of downwind racing to the finish. However, the weather is so changeable in the Baltic, it could well be different next time.’

The second edition of the Roschier Baltic Sea Race will take place in the summer of 2024. Leading law firm Roschier have committed to title sponsorship the next edition. Tremendous credit should go to the official race supporters and hard-working volunteers in Helsinki. The race is supported by the City of Helsinki, the Nyländska Jaktklubben (NJK), Finnish Ocean Racing Association (FORA), Helsingfors Segelklubb (HSK), FINIRC and the Xtra Stærk Ocean Racing Society.