A modicum of relief 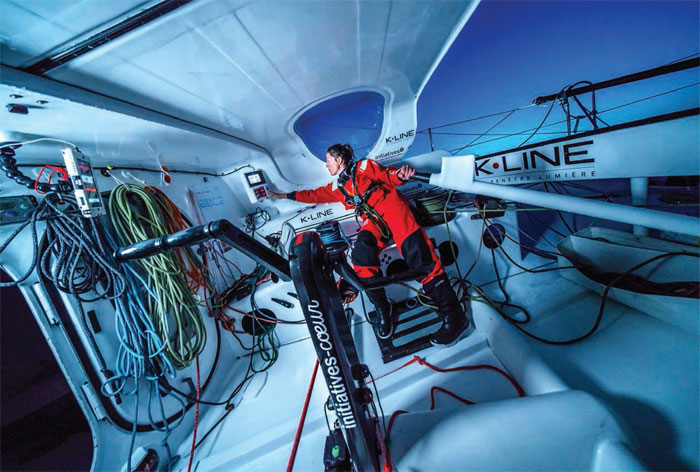 A collision with a large partially submerged object figures high on the oceanic racer’s list of fears. Never more so than today when we have grown almost blasé about racing along at more than 30 knots... at night

“Game changer” is a phrase used far too often. New developments and refinements can indeed change the game in offshore sailing, pushing the limits in performance to new heights. Yet rarely is there a new product that approaches an ongoing problem in such a fundamentally new way that it rises to be truly worthy of this term. It’s a pleasure to describe herein the Oscar system because for offshore sailors this is a revolution in imaging that will not only boost performance but likely save lives as well.

OSCAR stands for Optical System for Cognition and Ranging, and is the world’s first optical-based system that can not only identify the range and bearing to targets in front of the vessel, but also, through its Artificial Intelligence (AI) software, develop the cognitive ability to recognise what these targets are as well. This is a critical leap forward in helping navigators to decide how to take urgent evasive action if needed, based on the nature of the target.

Targets can run the full range of potential collision hazards like logs, buoys, containers, icebergs, other vessels and whales. More than just calculating whether a collision is imminent, the AI software in Oscar helps sort through the options of what the object may be, to then understand what action to take.

Main picture: Sam Davies is one of 19 Imoca skippers – more than half of the fleet – who will be using Oscar as their primary collision avoidance tool in the upcoming Route du Rhum.
Below: thermal imaging and camera views of Oscar on an iPad. It also works on Android tablets, phones and chartplotters. Oscar will be rebranded to SEA.AI this autumn 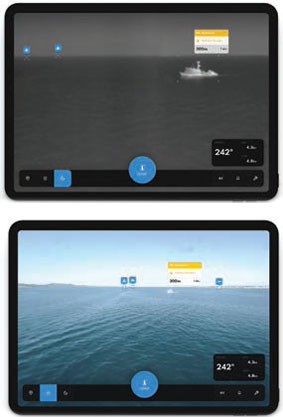 The image-recognition technology built into Oscar can be used not just for avoidance but to track objects too. If there is a crew overboard, a liferaft or some other object in need of rescue, Oscar can be of great value in helping track and retrieve that target. In most circumstances radar and AIS cannot provide the same resolution to find the object, much less help to identify what it is.

Whose idea was this?
The development roots of Oscar lie in an offshore passage made by founder Raphaël Biancale. Poor visibility, especially at night, and the absence of driver assistance systems as in development for cars sparked Raphaël‘s idea to provide more convenience and safety for sailors by combining sensor technology with AI. He started his career in R&D for automotive development companies AVL and Magna in the fields of intelligent car systems and automotive software.

After finding funding support, Biancale got in touch with Gaetan Gouérou, manager of the company Mer & Projets, co-founder of the CDK Technologies shipyard and general delegate of the Imoca class. Convinced by the concept, Gouérou decided to get involved. With his expertise and connections in the maritime domain, he helped get offshore teams interested in this emerging technology.

The Oscar system is built in Austria by BSB Artificial Intelligence GmbH and developed in partnership with BSB Marine located in Port la Foret in Brittany, France, and in Portugal, two locations with a strong maritime heritage. Valuable feedback on the design and performance features were provided from high-profile offshore skippers such as Jean Le Cam, Vincent Riou, François Gabart and Armel Le Cléac’h.

How does it work?
Oscar relies on a combination of high-resolution low light and thermal cameras, the latter designed to detect temperature differences to within 0.05°C. As images are gathered by the cameras there is a process of real-time learning of water surface patterns that can recognise anomalies in those patterns with a database using a neural network with hundreds of thousands of filters to detect and identify marine objects.

The proprietary Oscar database has more than five million annotated marine objects that have been gathered over the past few years from 300,000 miles of on-water use in a wide variety of settings around the world. This database will continue to grow and improve as more data is gathered and uploaded.

Users will have access to regular over-the-air updates every few months to benefit from ongoing machine learning and new features.

Another important feature of the Oscar system is the user interface (UI) and user experience (UX) to best display what the system is detecting so that the information is easy and quick to comprehend. The system is controlled with the Oscar-Navigation app on your smartphone or tablet (Android or iOS), your chartplotter or an onboard computer.

The UI uses an augmented reality video stream combined with a map view – much more modern than a radar screen with polar coordinates. The information given is integrated with the instrument system to give heading and speed figures of your vessel while identifying the targets within the detectable range. 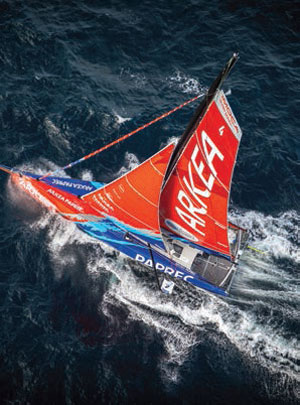 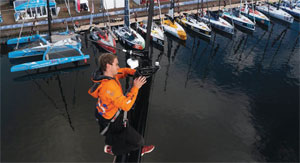 Above: Oscar is installed at the masthead. The race-spec Competition version, used aboard four Ultimes as well as many of the Imocas, weighs just 750g plus a cable weight of 104g/m.
Below: hitting a submerged shipping container at sea is every offshore sailor’s nightmare. Oscar is proven to be the most reliable solution 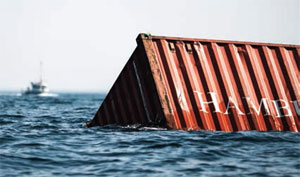 Targets close by are shown to scale on the screen because they are being imaged optically, with their range, bearing and speed noted in a colourcoded window based on object type. Targets further towards the horizon are noted with icons that correspond to their possible type, which is further refined as the object gets closer and more information is gathered. Those that may be on collision course are identified by an intelligent alarm system where filters are applied that identify their relative threat level within a tolerance of speed and course changes.

Another important feature in the user interface is having different settings for daylight and night time backdrops, as well as settings for coastal or offshore use.

The specific capabilities of the Oscar system depend on product model. The Offshore line includes Offshore One, Offshore 320 and Offshore 640 where each has these basic features: three cameras (one RGB and two thermal) and a rugged AI processing unit that is mounted at the masthead.

Differences in the Offshore products relate to daylight and twilight detection angles, detection frequency and thermal camera resolution. All unit types weigh 990g at the masthead.

In the Oscar Competition line of products, daylight and twilight detection angles are expanded to 110°, the resolution of the two thermal cameras is 320x256 pixels for the 320 model and 640x512 for the 640 model. Detection ranges are the same as the Offshore 320 and Offshore 640 units, but they only weigh 750 grams at the masthead.

Are there limitations?
Oscar is more informative and versatile than AIS and radar in most circumstances of use. The versatility of use in UI/UX is superior and the power levels required for both vision and processing units is only 25W for the 320 and 640 units.

However, while Oscar can “see” at night and low light environments more than three times better than the human eye in these conditions, its performance will degrade in fog and rain. Here radar is a useful tool, thus with Oscar it is a complementary system that can offer different benefits and limitations.

Installation of Oscar optical units at the masthead is easy, with two shielded cables needed for each: the Offshore units are 109g/m in cable weight while the Competition units are 104g/m. This seems amazing even on the most weight-conscious rigs: for less than a four kilo-weight impact on the spar the boat can have a safety feature aboard that may save the life of the boat and the crew.

Try to imagine how many offshore races that ended in collisions could have had vastly more favorable outcomes had Oscar been deployed. Maybe this is why 19 of 37 Imoca 60s and four of eight teams in the Ultime fleet have committed to Oscar in the upcoming Route du Rhum.

While sailing off the coast of Africa Samantha Davies wrote to the race director of the last Transat Jacques Vabre: ‘Oscar alerted me to several very small boats that I could hardly see under the spinnaker, behind the waves, one of which was right in our path. I took the helm in time to avoid the collision. We luffed after I changed course, but the worst was avoided. Thanks Oscar.’