Foiling into the future 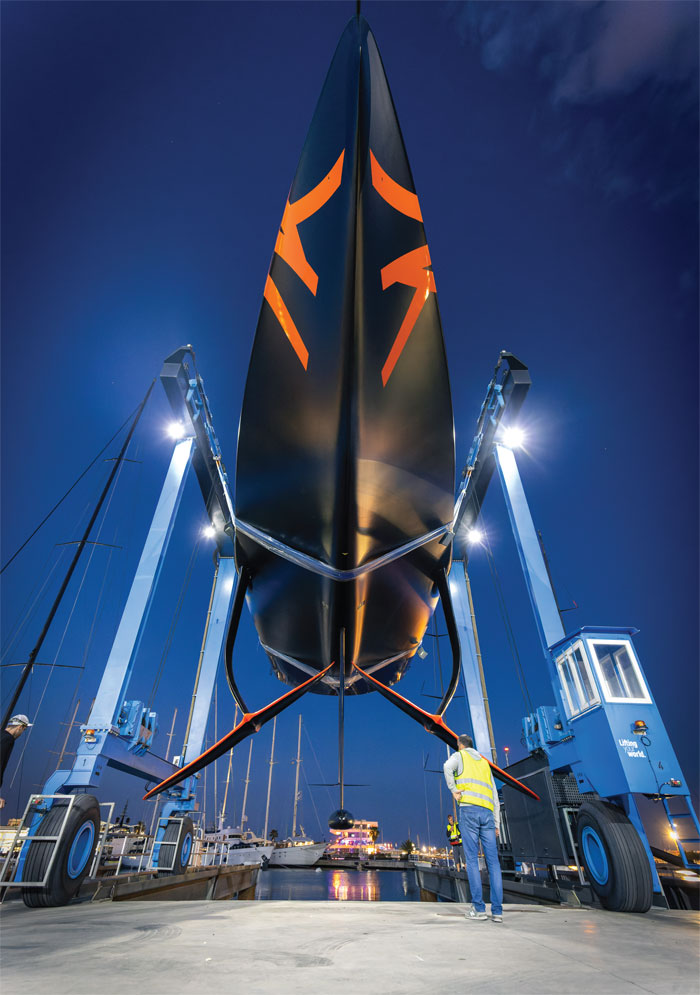 The most recent America’s Cup cycle demonstrated the pros (and cons) of achieving high performance on a large monohull with designs and builds focused on specific course types in a specific location and a well-defined context of competition. Advances in smaller sail and power foiling craft are also becoming interesting and relevant in the marketplace. The cutting-edge technologies needed to achieve the performance targets in these projects require the very best in design and boatbuilding fabrication, and King Marine has recently demonstrated its ability to meet this challenge with its four latest projects being foiling boats. 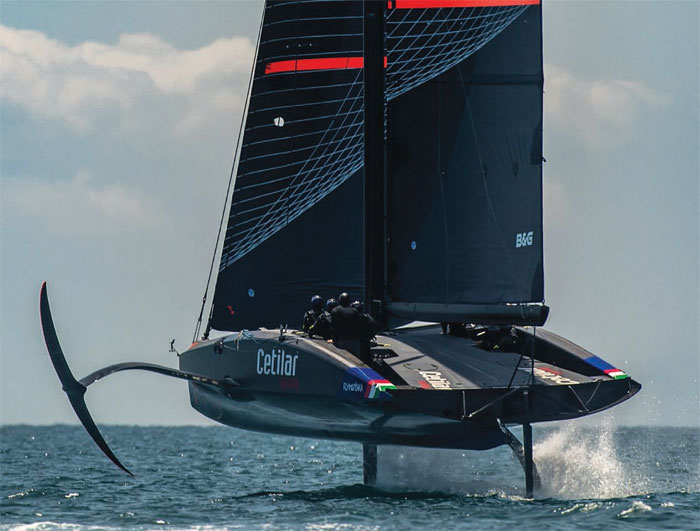 Built by King Marine and designed by Mark Mills, Roberto Lacorte’s Flying Nikka is a giant step forward in the application of foiling technology to offshore monohulls

For example, the recent launch of Roberto Lacorte’s Maxi-sized foiling Flying Nikka represents a huge forward step in applying foiling technology to offshore monohull performance. While the Imoca class yachts have demonstrated the application of monohull foiling in the oceanic passage context, until now no boat had been designed and built in this size range to have a wide range of foiling performance in a non-oceanic setting, such as the Mediterranean. Here in lighter air conditions the boat’s sailplan must have the power to generate the initial speed needed to overcome drag from the hull and foils, activate the lift forces to elevate the boat clear of the water and sustain stable flight.

Port and starboard moveable appendage arms and foils are needed to achieve and sustain flying performance on both tacks. A T-shaped foiling rudder keeps the boat in proper angle of attack trim for the foils to lift, as well as to steer the boat in both displacement and flying modes.

‘We had nicely clear directions on the concept,’ says principal designer Mark Mills. ‘This boat is more like the mule of the [American] Magic AC team than an AC boat itself. It will enter short offshore races in the Med, not the long offshore races held there and elsewhere. It therefore needed not only to meet the expectations for high performance, but also meet the safety standards in the racing and rating rules.’ On this point the team at ORC are working hard to get a workable solution for rating the boat, recognising that the VPP has to run in three modes: displacement, transition and flying. Not an easy task, yet one necessary for this and no doubt more foiling big boats racing against more conventional designs in the future. 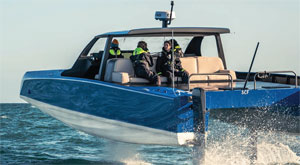 From yacht racing to sustainable transport

Another remarkable foiling project recently completed at King Marine is a 12.5 metrelong electric foiling catamaran, designed by VPLP from a concept developed by MerConcept. This very interesting design won an award in the powerboat category at the fifth Foiling Awards in Milan. It features innovations derived from offshore racing, in particular technologies relating to foiling and flight management.

With an eye towards high performance in addition to being eco-friendly, this carbon craft is powered by two electric motors, a single foil and two elevator rudders. The flight control system was developed by Madintec, which says: ‘This hydrofoil catamaran is the first boat that really demonstrates our will to transfer technologies from offshore racing to a more sustainable maritime mobility.’

Electrically powered craft of any type have to navigate some tricky trade-offs. Batteries are not light and the more you have the more range and power you may achieve, but also at the price of greater take-off speeds. For this design the boat’s autonomy in power is targeted for a 90- mile cruise at 22kts with a payload of eight people aboard, which is impressive for a boat this size. The protype of this remarkable design has been built at King Marine to the exacting specifications of the project’s design partners.

Mills also explains that the goal was to have early take-off in light air Med conditions and not try for ultimate top speeds, yet performance expectations are for 30kts VMG upwind and 40kts downwind… exciting indeed. There is a team of six top talent crew aboard. The foils are designed to flex and have auto-adjust features similar to those seen on TF35s. For a boatbuilder this is an astonishingly complex brief, not just for the complication of building strong component parts of the boat, its appendages and control systems, but also because every kilogram is critical and the physics are simple: every kilogram saved in weight makes the boat take off faster. For example, the overall length of Flying Nikka is 18.75 metres yet its weight is only 7,570 kg (slightly more than a TP52). Principal designer Mark Mills says for every 100 kg there is a 0.1-knot delay of take-off speed, so this put tremendous pressure on the design team, working with the suppliers and builders at King Marine, to be at their absolute best in achieving target design weights.

King Marine was able to meet this challenge by having a close collaborative relationship with all the various parties involved with the success of Flying Nikka throughout the life of the project. Only in this way were they able to start in June 2021 and finish in May 2022, on time and on budget. It’s a remarkable achievement given the lingering supply and staffing issues due to Covid and other new issues that arose recently due to the war in Ukraine. The entire team was composed of recognised leaders in their fields including Mark Mills and KND Marine as co-designers; Pure Engineering on structure design; Nat Shaver on foil design; Thiha Win for the wing system and steering concepts; and Michele Malandra for sail design.

Putting the design concepts into action were other team members that included suppliers Cariboni for the hydraulic systems; Donati Racing for electronics; Faro Advanced Systems and Ricadro Bencatel for PLC and flight controls; Gottifredi Maffioli for running rigging; Re Fraschini for foils and rudders; Southern Spars for the mast; KZ Marine custom furlers; North Sails for sails; Platero for the engine system; and Harken for winches and deck hardware. This remarkable group was led by project manager Micky Costa, internal project manager Matias Bevacqua and hi-tech boatbuilding experts like Pablo Santarsiero, who were tasked with transforming all ideas into achievable plans.

‘This project took 30,000 man hours to complete,’ says Santarsiero. ‘That is more than twice the amount for a typical TP52, which as we know is also a demanding build in carbon where every kilo counts. The spirit of collaboration on this project was amazing and while there was a lot of stress at the beginning we were really pleased at the end when it all came together. There is no better feeling than delivering a project like this to completion with good results at the end.’

Since there was such a strong demand to minimise weight in the build, Santarsiero says they built female tooling for the hull and deck and had no fairing materials – their process of layup and lamination was sufficient to meet the specifications for a raceboat. 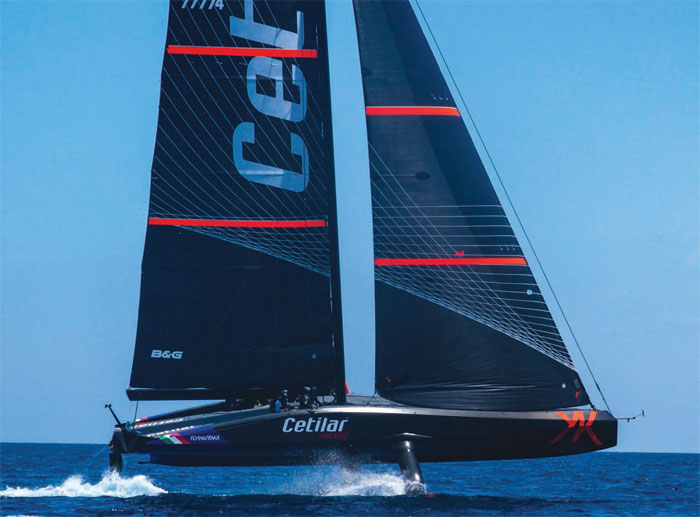 Making this possible at King Marine are not only their talented in-house team who have 10 years of experience (since the 2013 America’s Cup) in building high-quality carbon foils, but the tools they use such as the 2.7 x 8 metre autoclave for prepreg composites, the two Eastman prepreg cutting plotters for ultra precision in making precisely what’s needed in the laminate with minimal extra waste, and a Faro arm for measuring, to ensure quality control. This is in addition to three postcuring ovens of sizes appropriate for multiple applications – 32 x 9 x 6 metres, 26.6 x 8 x 5 metres, and 9 x 8 x 5 metres – two clean rooms for handling pre-pregs, an ultrasonic NDT machine for quality control, CNC milling equipment, a full carpentry shop and specialised storage facilities for sensitive goods like core materials, dry fibre, pre-pregs and dangerous materials.

King Marine has two locations: a boatbuilding facility and a fully-equipped waterfront centre in the old Team New Zealand base from the 32nd Americas Cup. Here is where new boats are launched and sea trials performed to ensure all details are worked through until both builder and customer are satisfied. Flying Nikka was commissioned here in early May.

Flying Nikka’s race plans include the Giraglia Race in June and the Maxi Worlds in Porto Cervo in September. All eyes will want to see how this exciting project will finally perform on the racecourse as a presage towards more boats like this in the future.

Since it was founded 17 years ago, King Marine has built up a world class team of composite boatbuilders and a wide range of other specialists at the top of their game 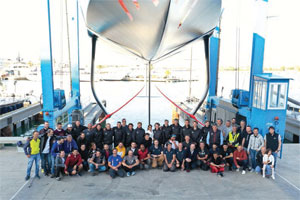 King Marine is further establishing its reputation in meeting the demands of foiling technology with new projects planned in other arenas of offshore foiling, such as the very demanding field of the Imoca class. Here the pressure to achieve is extremely high since not only is this a highly-competitive arena, but failure is unacceptable and possibly dangerous, so the build quality has to be at the absolute best.

This is not an unusual circumstance for the team at King Marine, who has a legendary obsession for quality and has been delivering the highest quality in custom high-tech racing yachts for the past 17 years from their base in Valencia, Spain.