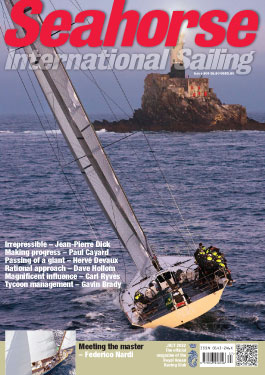 Less is more?
Not always, says ROB WEILAND. We are all surely delighted with the growth of two-handed sailing but it does come at a cost as opportunities for less experienced sailors inevitably contract

Neanderthal in a carbon cave
Tour Voiles winner, TJV winner, Barcelona World Race winner, yet never quite the Vendée Globe. But there is plenty else to be proud of. OYVIND BØRDAL meets the hyperactive JEAN-PIERRE DICK

Master craftsman
FEDERICO NARDI and his four other co-owners at the Cantiere Navale dell’Argentario could never have imagined how a single challenging 12 Metre restoration would give birth to an entire new industry. GIULIANO LUZZATTO

Champion!
For somebody who keeps himself below the radar designer DAVE HOLLOM has been racking up some big titles. His new 5.5 Metre also just went straight to the top of the charts at Lake Garda

We’ve got it covered

Best for your yacht, better for the environment

Starting from the top

The same but different
Why Sørvind – the fifth Southern Wind 105 off the stocks – is exactly that. KIERAN FLATT

World News
CARL RYVES is the real deal, PAUL MEILHAT gets his 60, Class 30… the talking’s over, back at it (and eating). And remember who pays the bills. GERY TRENTESAUX, BLUE ROBINSON, PATRICE CARPENTIER, JO ALEH, GAVIN BRADY, IVOR WILKINS, DOBBS DAVIS

RORC – Words into action
It’s working pretty well for them… maybe it can do the same for you? RAY CAMPION

Seahorse build table – First of many?
Ladies and gentlemen (provocative…), we bring you the IRC scow. ANTOINE MAINFRAY

Forty years ago – a proper baddie