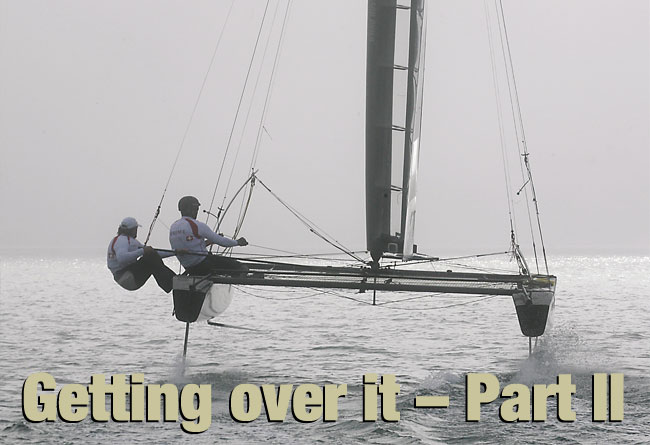 As was touched upon last month, 3Di trampolines made an appearance on both Canadian boats as well as Franck Cammas’s victorious Groupama. We find they are lighter by half and far stiffer to use. Walking on a 3Di trampoline is more akin to walking on a deck than a spongy trampoline of days gone by. They are also extremely effective when it comes to the end plating of the wing as they are impermeable.

Ironically we also found that a 3Di trampoline saved us a few times after big pitchpoles, wherein a few hundred litres of water would end up on the tramp and not drain away too quickly… making for some serious ballast in the right place at the right time. In addition to the end plating of the wing, we were also detecting a ground effect upwind where the tramp would definitely aid in lifting the boat out of the water in windier conditions. This ground effect only added to the direction of development whereby, combined with a bit of foil, you can now foil upwind quite easily.

By contrast the Swiss Hydros team had gone with a traditional net for a tramp, principally so that they could see their ride height and know how far above the water the leeward hull was flying. By the end of the event, however, they too were putting film over their net to improve their aero performance.

Construction of the boats has had to advance quickly to keep pace with the developments below and above the water. Hydros and Groupama both used TPT in the construction of their hulls to get the lightest possible laminate schedules. Meanwhile, all four leading boats used TPT in their wing construction to achieve super-light and stiff components. The average C-Class wing of 300ft2 today weighs about 150lb.

Below the water again the big challenge was foils and structure. Any team that was foiling had destroyed many foils in development, both on C-Class cats and on modified F-18s or NACRA 20s. At this stage foils are now completely solid carbon laminate, with steel or titanium elbow joint reinforcements bonded in to allow for swappable tips on the foils. Looking ahead it would seem that everyone will now be moving in the direction of CNC-milled solid carbon blanks to create foils and moving away from female moulds. The objective of all the designers participating was to make the foils as long and as skinny as possible to maximise span efficiency.