Now for some sport! 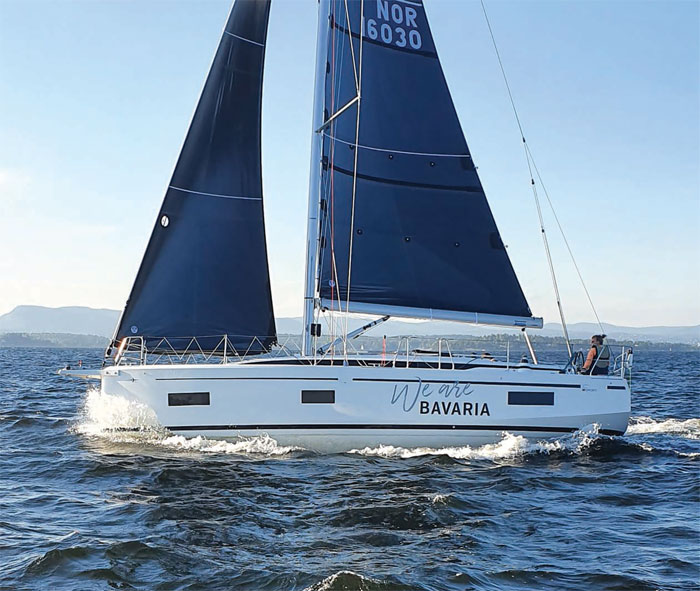 Claes Eliasson, lead designer Maurizio Cossutti and the Bavaria Yachts team all agreed that now is the time for something a bit different…

Have you ever sailed a cruising yacht and wondered how much faster it might be with a good set of racing sails – and with some of the heavy cruising equipment removed? Claes Eliasson, a Norwegian dealer for Bavaria Yachts and a keen club racing sailor, is leading a team with a mission to find out.

Cruisers are of course designed to have a high load-carrying capacity and the best ones sail fairly well even when heavily laden with optional extras like bathing platforms, bow thrusters and cockpit tables. But what if the typical options budget was instead devoted to boosting the boat’s performance? How much difference would that actually make?

You need the right boat to start off with. Some cruisers have far more scope for performance optimisation than others, and Eliasson knew that he had a good candidate for the project he had in mind when the naval architect Maurizio Cossutti showed him the plans for the Bavaria C42. That boat went on to win the European Yacht Of The Year Award, on the strength of its sailing performance, but Eliasson ended up using its smaller sister, the C38 – Cossutti's most recent design for Bavaria – as his test boat.

‘This hull and the boat as a whole have potential for good results in club racing,’ Eliasson says. ‘Together with North Sails and Cossutti, we are interested in finding out whether it is worth offering sport versions of the Bavaria C38 and C42. So we ordered a standard boat from the yard without a bathing platform, cockpit table or bow thruster, which saved quite a lot of weight. We made some minor modifications locally. The sails are custom made and Cossutti has been helping us with design and development.’

Main picture: Claes Eliasson’s Bavaria C38 has been optimised for club racing with input from an all-star team that includes Cossutti Yacht Design and North Sails Norway. The early results are impressive and further performance gains are expected this season

It would be easy (although expensive) to demonstrate impressive performance gains by ripping out the interior of a standard production boat, adding a deeper keel, fitting water ballast and replacing the regular rig with high aspect, high modulus carbon to create the seagoing equivalent of a World Rally Championship racer. But that would go against the ethos of Eliasson’s project, which aims to show the full performance potential of a normal Bavaria C38 with the sort of optimisation that an average owner could realistically achieve, in partnership with a local sailmaker, while preserving the true essence of the boat as a well-equipped and fully functional family cruiser.

The project kicked off in January 2021. The boat was delivered in May and the team began tuning and applying a modest series of upgrades. ‘We were all curious to see how well the C38 could perform against a strong club racing fleet,’ Cossutti says. ‘It is not so strong in light winds because it wasn’t designed for racing. So we are working with the sail designers to maximise the sail area. The mast, boom and bowsprit are standard, exactly the same as any other C38. We’ve been working on the mainsail roach, optimising jibs and especially working on gennakers. The target is not to buy 20 sails but to maintain a good money-to-performance ratio.’

Eliasson’s project team also includes Christen With of North Sails Norway, consulting on rating and strategy; his colleague Pål Berntsen, advising on sails and equipment; and freelance expert Pascal Kuhn, a former Bavaria product manager who worked closely with Cossutti and Ganz on bringing the second generation of C-Line yachts to market.

The boat’s performance is promising. Eliasson has logged 14.8kts downwind with a bit of wave assistance and while sailing solo he finished a 45-mile passage a whole hour ahead of a 46-footer with a strong crew and a full sail package. ‘‘We haven’t won any regattas yet,’ he says. ‘But we have been on the podium three times, racing against strong competition: JPKs, X-Yachts, Arconas, the best boats in Norway.’ It’s worth pointing out that most of those boats cost three times as much as the C38.

‘As with all boats it has taken some time to get to know its characteristics and find the right trim,’ says Christen With. ‘We have focused on mast trim and tested which shape is most favourable in different wind conditions. Gradually we have made the boat go better and better.’

The guiding principle for sail development is to create a package that any C38 owner who wants to race can easily buy, and that works well on the boat’s standard spars. The test boat’s initial sail wardrobe included a 47m2 mainsail, three jibs ranging from 29m2 to 40m2, a 58m2 code zero, 125m2 and 111m2 gennakers, and a 36m2 windseeker.

‘We are amazed that we can use the 35m2 medium jib up to 20kts,’ says With. ‘We have discovered that this boat loves to have great power in the headsail. At the same time you must be active in trimming the mainsail flatter and flatter as the wind increases. The boat then becomes a real pleasure to steer. This is a clear advantage in regattas. For cruising it means that the steering is easily mastered, even for an inexperienced sailor. And the autopilot will do a good job when you want to leave the helm.’

Sails aside, the first season’s upgrades included inhaulers for the headsail sheets, Seldén racing blocks, an adjustable Dyneema backstay, Dyneema running rigging and a reworked mainsheet setup that gives more mechanical advantage. The C38’s cockpit is huge compared to many cruising yachts, which tend to be designed for shorthanded crews, and all that elbow room comes in handy for racing. ‘I’ve had professional racing crews on my boat and they are very impressed, especially with the cockpit,’ Eliasson says. ‘With a full crew of six to eight people there is plenty of space for everyone to work the boat efficiently and comfortably.’

Fixed and removable mainsheet travellers were considered but rejected. A fixed traveller would compromise the boat’s dual-purpose role as a family cruiser as well as a club racer, and a removable one wouldn’t be long enough to make much of a difference to sail trim. Instead, the sheet is led to an easily removable block in the middle of the cockpit sole. 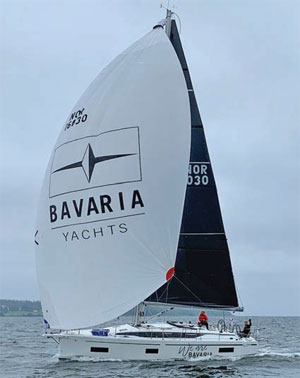 Above: the test boat has a normal rig but a lot of effort has been put into sail development, focusing on jibs, gennakers and mainsail roach profile.
Below: the team are being careful to preserve the boat’s essential character so Eliasson’s C38 still has its original keel and rudder. Major modifications are firmly off the agenda

‘It is important to understand that although we have put quite a lot of effort and money into sails and deck hardware, our aim is to see how far we can go without destroying the concept of the boat,’ Eliasson explains. ‘And it’s also important that the performance version of the C38 can very easily be changed back into the full cruising version.’

Isn’t he tempted, though, to remove some of the heavier items down below when competing against purpose-built racers? ‘Absolutely not,’ he says. ‘I’ve never removed anything from the interior. And we’ve been sailing this boat with all of the Category 3 safety equipment on board, which adds a lot of weight. We haven’t even moved the battery for the anchor windlass, which is in the bow. We’ve actually found that it pays to move weight forward in light conditions.’

Bavaria’s head of production, Udo Erbe, is following the project closely to ensure that the knowledge gained can be fed back into the manufacturing process. ‘Even a family cruiser should be a fast boat,’ he says. ‘And this project shows what’s possible in terms of optimisation.’

‘By providing Claes with support we’re also gathering data that will help us evolve our polar tables for a range of projects,’ Cossutti says. ‘And a lot of knowledge goes back to Udo at the yard. It has been interesting to stress the boat and compare it with other boats in a racing environment. This has given a clear indication that the boat really is as good as we thought it was at the beginning. That is important for the yard and for us too. One of the challenges of cruising yacht design is that you have to consider how the boat performs and handles in many different cases between empty and loaded with water, fuel, people, equipment and so on. The displacement can change dramatically. It helps us when we see how it performs in club racing.’

The project is ongoing and the optimisation continues. ‘This year we are adding a North Sails 3Di jib which will give us more power in light winds,’ Eliasson says. ‘it’s probably the first one that’s ever been fitted to this sort of boat and definitely the first with a Helix luff. We are also changing the boom for a lighter one.’ We await the new season’s results with interest.