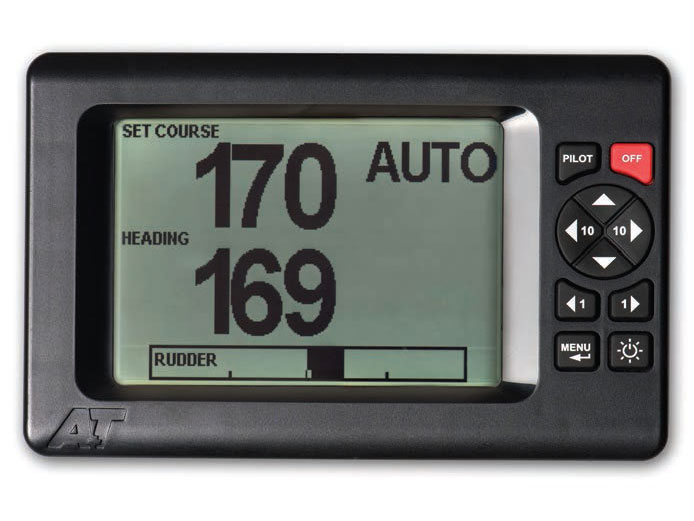 A+T has built a well-established reputation for high performance instruments, with beautiful engineering and second-to-none support. Their products are now being used on over 400 of the world’s largest and fastest superyachts.

Building on this foundation they have now launched a new autopilot built to the same exacting standards. This is the first production autopilot using a web server interface so the user can easily see “inside” the pilot to see how it is performing. The captain or commissioning engineer can see all aspects of the setup and at-sea behaviour including graphic data such as the demand rudder, the actual rudder, the demand heading and the actual heading which helps separate the performance of the pilot from the performance of the yacht’s mechanics. Data can also be logged and sent to A+T for analysis or A+T engineers can “teamview” in to remotely diagnose and help with calibration and setup while the yacht is on sea trials.

Another outstanding feature of this pilot is the control unit. Designed to be separate from the pilot “brain” and located near the rudder and steering gear, the control unit is connected by a single Ethernet cable carrying low current power and data. The pilot controller has a wide range of drive outputs including 50A drive for electrical motors/actuators/solenoids and fully variable control outputs (galvanically isolated +/-10V and 4-20mA) for proportional valves with continuous running pumps, as found on many larger yachts. Specifically, these can be set up with selectable ramp-up and ramp-down times to give smooth operation rather than the bang-bang operation that the typical smaller boat production pilot produces.

Main picture: Classic pilot control, which can also provide a secondary display of all instrument data where space for additional display units is limited.

All these settings can be set, tested and adjusted during dockside setup. Diagnostic LEDs on the control unit are visible through the lid, which are a great aid during diagnostics. All of A+T’s instrument systems and displays are built to be tri-lingual:

This comprehensive interfacing makes the A+T pilot ideal for upgrading an existing system or adds flexibility when installing as a new-build as any mixture of these interfaces can be used simultaneously.

Inputs are provided for both followup (proportional) and non follow-up rudder control. A classic Pilot Head Display from A+T controls the pilot from any number of helm positions and it can also be controlled from connected chartplotters. 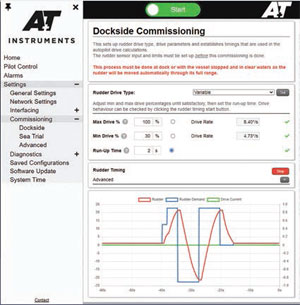 Above: the web server interface allows users to see inside the pilot and directly make adjustments.
Below: A+T’s pilot control unit has a wide range of rudder drives and input interfaces 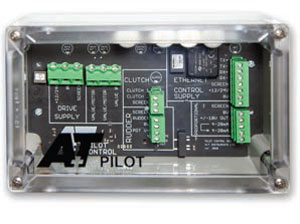 As with all A+T equipment, a wide range of interfacing is built into the pilot so any rudder sensors and compasses including gyro-compass can be interfaced directly. The pilot has built-in heel/pitch sensors and three axis rate gyros to improve pilot performance as standard. Robust power supplies enable the A+T pilot to run on anything from 10v to 35v.

The pilot will provide all steer-towind functions when connected to an instrument system and a full program of upgrades is in the pipeline to provide self-learning and more advanced steering algorithms.

A good number of pilots have been installed during 2021 and have racked up many thousands of miles in Mediterranean and transatlantic sailing with very good feedback from captains. One such installation is on the 145ft Wally Saudade which has a full set of A+T equipment on board with main instrument processor, load cells and most displays including a full mast rack of the highly regarded giant full-colour A+T BFD displays.