A new name but a formidable heritage 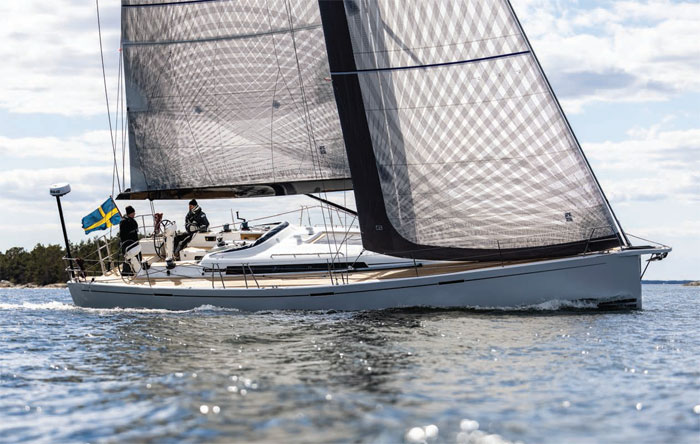 There’s a chance that you won’t have heard of Arcona Yachts and even if you have, you still might struggle to describe them. After all, this is a company that has enjoyed 40 years of success, but where much of it has been conducted away from the international spotlight. It is a company that has never set its primary goal as winning races and yet has delivered some impressive results nonetheless. It’s also a company that has produced nearly 1,000 boats in 40 years and has achieved cult status among those who have discovered the marque.

But the focus of attention right now is the news that the co-founder of one of the biggest names in performance production boatbuilding and a former competitor has joined forces with Arcona. For Swedes, the fact that he’s a Dane may raise a wry smile, but to the rest of us Niels Jeppesen’s achievements with X-Yachts, the company he co-founded, along with his reputation on the racecourse, means that his views get taken seriously.

So, if you hadn’t heard of Arcona, that is about to change. Since she first slipped into the water in 2018 the Arcona 435 has attracted a good deal of attention as a design that delivers far more than her modest, elegant and sleek looks might suggest. Interestingly, even the brochure provides few clues as to what really makes her tick with no mention of her race-winning attributes or setup.

Instead, while her traditional layout and style below decks with her beautifully finished Khaya mahogany interior is that of a cruiser, the message on deck is subtly different. From the windward sheeting car for the mainsheet to in-haulers on the jib sheets, soft shackles on the halyards and deck organisers to allow you to cross sheet halyards and control lines in the pit along with plenty more examples, she is far more the racer/cruiser.

Main picture: like every other boat they’ve built, Arcona Yachts’ flagship 465 is a quintessential sailor’s yacht with perfect balance and great helm response. Built entirely in carbon and packed with performanceenhancing features, this so-called cruiser has logged speeds in excess of 24kts and won far more than its fair share of regattas

On the other hand, a fixed bowsprit with its anchor garage, a spray dodger moulding in the coachroof and a cockpit table that rises out of the floor are details that suggest something quite different.

Dig a little deeper into her specification and you’ll find that this is a cruiser that is available with a carbon hull and rig. And then, when you take the helm you’ll discover a 43-footer with the silky smooth, well balanced feel of a grand prix racer.

Those who know the brand well will tell you that these are familiar characteristics of the range that was designed by the late Stefan Qviberg. And yet the company has recently gone through a series of key changes in its management with Urban Lagnéus taking over the reins as the new CEO. On the face of it, not something that might seem especially newsworthy outside the marine business sector, but his personal background and his route to the role suggests a career path that almost emulates the dual personality of the Arcona Yachts themselves.

A racing sailor from an early age, he started in a Mirror dinghy before working his way up to representing Sweden in the 470 at the 1992 Olympic Games in Barcelona. ‘I raced a 470 for 12 years with Magnus Lundgren. We had some good successes and were often in the top 10 in the world, but we couldn’t quite get a world championship win,’ he said. ‘Fifth was our best result at the world championship, but we did win the World Cup in both 1991 and 1992.’

Today, Lagnéus and Lundgren’s partnership afloat continues aboard a J/70 for the Swedish National League but their story ashore is also one that has endured for more than 40 years. ‘Throughout our Olympic campaign, Christoph Rassy was our sponsor but then he asked me to be the finance director and I worked for Hallberg- Rassy for 18 years,’ says Lagnéus.

He went on to work outside the marine industry after Christoph Rassy retired, but the combination of a racing background and his boatbuilding experience for one of the world’s best-known high-quality production yacht builders remained crucial assets for his move back into the industry with Arcona. And when he did, he is back working with Magnus Lundgren as a team again but now both for Arcona Yachts!

Meanwhile, the passing of designer Stefan Qviberg had left a crucial position to be filled.

After selling his remaining shares in X-Yachts in 2019 Niels Jeppesen had set up a UK-based design company, Jeppesen & Pons, for which Arcona became his first client.

‘While I was at X-Yachts I studied the competition for many years and noticed that Arcona was trying to break into our market. In the spring I saw how many of their yachts would arrive in the marina in Hamble where we had our design office. At more than one point, Arcona was selling more boats into the UK than XYachts. But I had never seen them close up, so before I had the agreement with Arcona I went on board to have a look and I was very impressed. At that point I knew that I wasn’t going to have any issues about the level of detail or quality.

‘I was also clear that their owner and management team were willing to take long-term decisions and make serious investments in the development of the range. In addition, I was pleased to see that their focus on creating boats that perform well and feel good was right at the top of their list which struck a chord with me. It was just what we had always sought to do at X-Yachts.

‘Add to that the appointment of Urban Lagnéus as the new company chief executive, a person who has been sailing all his life and has his heart very much in the right place and it was an easy decision to agree to work with them.’

For all the plaudits that Arcona gets in the yachting press, it’s difficult to imagine a better validation than from their former arch-rival.

But Jeppesen’s view of the road ahead is equally revealing. With 48 years designing, building, racing and cruising under his belt, Jeppesen’s perspective on where the boatbuilding industry sits and where the challenges currently lie provides a clearer understanding of how Arcona achieve their distinctive feel and performance.

‘We were designing and building some very extreme boats back in the 1980s and 1990s,’ he said. ‘Back then we were using carbon skins, Nomex cores, titanium and other advanced materials because weight was everything. But the boats were fragile then. 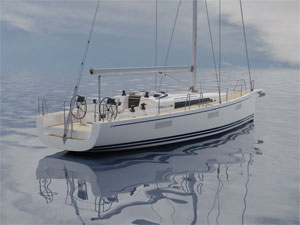 Above: the new MkII version of the Arcona 435 has a beamier and slightly longer hull with a semiintegrated bowsprit, larger hull windows and more headroom inside.
Below: unlike most boats that offer this level of performance, all Arconas have a beautifully finished mahogany interior as seen on this Arcona 345 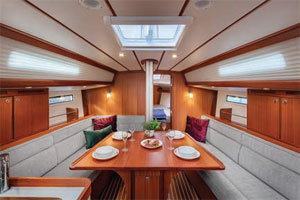 ‘Today, there’s still a great deal of pressure on keeping weight down on cruisers because of the amount of equipment and services that we’re putting on board. This means that we have to look just as carefully at the way that we build boats, which leads us to carbon and other modern materials and techniques. But we can’t make cruising boats that fragile, so it means that we must look at modern materials and build techniques. We also look really carefully at every item that goes on board. And we can’t just go for the lightest answer, maintaining quality, finish and reliability is essential.

‘So, from looking at new ways of creating sandwich Corian worktops to installing lighter washer/dryers, there is more pressure on the design and build of a modern performance cruiser than many people think.’

While the primary focus is on cruising, the Arcona range has been very successful on the race course, especially in Scandinavia. The Pantaenius Bohusracet is the largest doublehanded regatta in Sweden and an Arcona has won its class in every race for the last four years as well as winning overall in 2016. The Tjörn Runt is the second largest event in Sweden where Arcona has won overall in 2020 and been class winners for four years in a row, across a huge range of conditions from 35 knots down to just four knots of breeze.

And then there’s the Gotland Runt with overall victory in 2017 and first, second and third in class in 2021.

Placing performance at the top of the list for a range of cruisers might be considered bold in the fiercely competitive production world where internal volume and apartment styling is king, but Lagnéus sees the niche market in performance cruisers as an advantage.

‘We want to appeal to customers who above all else want to come back to the dock feeling that they’ve had a really good sail, that’s the motivation for us. And that means good balance and good feel aboard a boat that is easy to manage,’ he says. ‘If you compare it with cars, you can be very comfortable in a Volvo, but you’ll have had more fun driving a Porsche.

‘And the fact is, that while the cruising yacht market is big, fewer people want performance cruisers, so there are fewer builders and that means less competition. Surely it’s a win-win?’

A win-win based on a mix of deep-rooted racing, cruising and production experiences. So, if you had not heard of Arcona, this is just the start.