Too good to keep 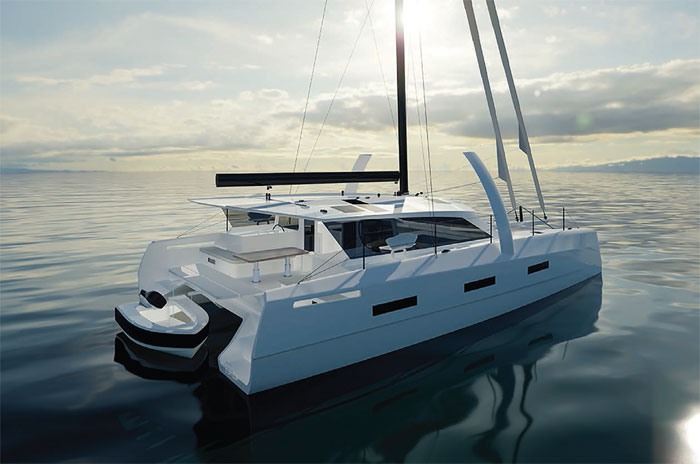 Champion raceboat designers Carkeek Design Partners thought they were drawing a new one-off world cruising cat for an experienced yachtbuilder’s personal use. Things didn’t quite turn out that way...

Some of the best yachts are created when a raceboat builder wants to go off cruising with his family and has a boat designed for personal use. Thus it was (initially at least) for the Carkeek-designed Seaquest 46, which has exactly the right sort of pedigree. It’s built by Mike Eaton, whose highly regarded racing monohulls such as the Prima 38 and RP36 have proven themselves to be excellent all-rounders. Shaun Carkeek’s wide-ranging successes across many strands of highperformance sailing are already well-known to most…

However, instead of going off cruising himself, Eaton has put those plans on hold and put the Seaquest 46 into production. It’s the first model in a new range of catamarans, built in Dubai where his shipyard has been based for most of the last 20 years. Before he’d even started, the first two Seaquest 46s had already been sold off plan.

An Eaton-Carkeek collaboration is bound to produce an interesting, innovative and refreshingly different boat. Sure enough, the Seaquest 46 looks distinctly unlike a typical cruising cat, both above the waterline and below. It’s sleeker than most, with cleverly concealed davits and no need for an unsightly gantry mounted aft. And it breaks some of the multihull industry’s basic rules, like the one that says all hulls must be fat enough to fit queen size island beds fore and aft.

Main picture: It’s a cruising cat but not as we know it... The first multihull from Eaton Marine, the Carkeek designed Seaquest 46, is packed with innovation. The curved daggerboards generate lift that allows much finer bows and high-volume stern sections

The Seaquest 46 does offer queen size berths in up to four cabins, but by not having walkways on both sides of them you get hulls that are much more hydrodynamically efficient. While the volume inside the hulls is a bit smaller than average, the above-average size of the saloon more than makes up for it. As Eaton says, in this sort of boat most people spend very little time down below. Saloon size is what really matters.

Another defining feature of the Seaquest 46 is that it’s designed from the outset as an all-electric boat (a diesel-electric version is also available). Both versions have enough regeneration capacity via the twin propellers at seven knots of boatspeed to be self-sustaining on passage, even when running the air conditioning and other hotel systems. There’s additional power from a huge expanse of solar panels on the roof, which has a long aft overhang to maximise the size of the solar array, plus a small diesel generator for backup and emergency use.

The silent running of the electric drives is a big boost to quality of life on board and their immense low-end torque is a real boon for manoeuvring in port. Another advantage, which isn’t so obvious, is that the propulsion system has a fixed weight so the hull design doesn’t need to allow for the large fluctuation in loaded displacement – about 800kg on a 14-metre ocean cruising cat – between full and empty tanks of fuel.

One of the boat’s stand-out features (literally when they’re raised) is the pair of gracefully curved, high-aspect daggerboards sticking up out of the deck, which will give the Seaquest 46 a much tighter tacking angle and far better upwind VMG than any cat with fixed keels. But these boards have another function too, which explains the unusual shape of the hulls. Located a little way forward of the boat’s centre of gravity, they generate dynamic lift as well as lateral resistance, raising the bows when the boat is powered up. 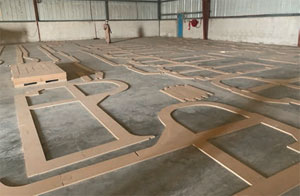 Above: construction of the first Seaquest 46 started with these hull frames laid out on the factory floor
Below: Carkeek’s design combines a high bridgedeck clearance for good offshore seakeeping with a very low centre of gravity. 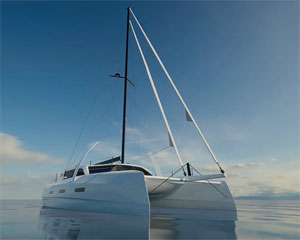 The daggerboards’ lift allows the bows to have very fine entries without the usual drawbacks of pitching and burying, while the aft sections are wider and flatter than you might expect. The result is a boat with more longitudinal stability and thus a more comfortable motion, potentially more boatspeed and better load-carrying ability. A limited cruising payload is the Achilles’ heel of most offshore multihulls, but the Seaquest 46 can carry well over two tonnes.

Another thing that’s different about this boat is the helm position, which required Eaton and Carkeek to think outside the box – and eventually outside the cockpit. ‘We tried everything,’ Eaton says. ‘We didn’t want to put the wheels right at the back (which is the least comfortable position on board for the helmsman) and I didn’t want a helm up front, like some high-performance cats, because you don’t get a good view of the sails. I knew exactly where I wanted the helm but unfortunately there was a roof in the way. So Sean said: “Put it through the roof”. That wasn’t so easy. We’ve only just signed it off now after working on it for two years.’

It’s a novel solution. The helmsman and sailing crew sit or stand on raised plinths in the cockpit, facing forward with their heads and shoulders through hatches in the cockpit roof. All lines, sheets and halyards are led aft from the mast to a pair of winches and a bank of clutches on both sides. Owners can opt to have a wheel in each of these positions, or on one side only with a sail-trimming station on the other side. The self-tacking jib is sheeted to a track on the front of the saloon roof and the mainsail to a traveller mounted aft on the cockpit roof, with fully electric operation available if desired. With all sail controls up there, out of the way, the entire cockpit becomes a safe space for kids and non-sailing passengers. The boat can also be steered comfortably from inside the cockpit, with the helmsman looking forward through the saloon.

The mast is also stepped on the roof. ‘Initially I didn’t want that,’ Eaton explains. ‘I said let’s put it straight through the saloon. Sean said no because of noise – having opted for the noiseless joy of fully electric engines we weren’t ready to risk our peace disturbed with halyards knocking inside the mast.’ Customers can choose an aluminium or carbon mast. Both options are fixed, rather than rotating, avoiding adding complexity and cost for minimal gain. 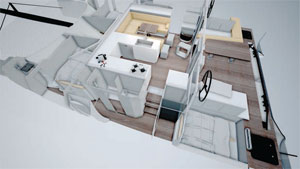 Above: the interior layout offers a huge open plan living space in the larger-than-average saloon and up to four double cabins with queen size beds in the hulls

With the roof of the cabin and cockpit taking all of those loads, and no compression posts or poles in the saloon or cockpit, a lot of carbon fibre is needed to strengthen and stiffen the supporting structure. That does add a significant amount to the cost of the boat but Eaton says it’s well worth it. You have the confidence of knowing that the roof can withstand the full force of a careless crash gybe, and you get to enjoy two enormous and uncluttered, wide-open living spaces connected by four fully glazed, sliding doors.

Eaton earned his reputation building boats that are light, strong and fast using good quality basic materials. That ethos carries through to the Seaquest 46. Very sensibly for a world cruiser, it’s built mainly in e-glass which can easily be repaired by a local boatyard in a remote part of the world, or indeed by an amateur boat owner. Carbon fibre is used strategically, in places where it makes a significant difference to the boat’s performance, and where nothing else will do.

Ease of maintenance has been considered throughout – there’s no part of the steering system, for instance, that can’t be easily inspected, adjusted and fixed under way. ‘I’ve gone for Spectra rather than solid links where I could. If you put solid links in there, you couldn’t get to a lot of it. And I’m one of those guys who insist on being able to access every part of every system in every part of the boat.’

So what sort of passage speeds can we expect from the Seaquest 46? Carkeek’s VPP suggests that even when sailed very conservatively, with sails well reefed, more than 200 miles a day can be expected. With a bridgedeck clearance that’s higher than most plus a low centre of gravity, it shouldn’t be slowed down unduly by choppy seas or ocean swell. When fully powered up and actively sailed in performance mode, about 360 miles in a day should be easily achieved. You can’t do that in a 46ft cruising monohull. Or a regular cruising cat.