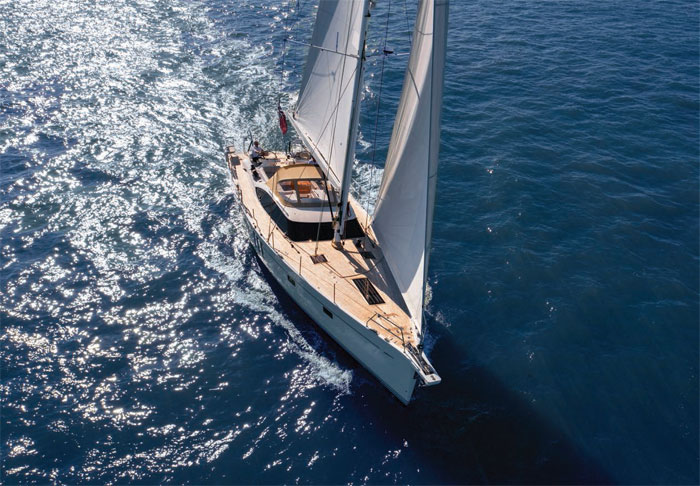 Some boats stand out as milestones for their builders and the Oyster 595 looks set to be one of those. The second new model launched since Oyster was bought by the tech entrepreneur Richard Hadida, the 595 is already being recognised as far more than simply a scaled-up version of the 565. While each might share the same distinctive modern looks, climbing aboard them makes it easier to see what sets them apart.

The 595 was always intended to be the second part of a double act in which Oyster took key lessons from bigger boats in the range, particularly the 885 and integrated them into a new generation. Skilful adaptations of these features meant that the 565 quickly became dubbed by some as the pocket superyacht. And while the 595 continues this trend, she is also the flag bearer for several big and significant steps forward that have taken place behind the scenes.

For starters, some of the fundamental changes to the way in which Oysters are built started with the 565/595 project which continues to lead the way as the company applies new approach to the strength and integrity to the boats and rolls out new procedures, and working practices in facilities that have also been entirely reshaped.

One such example is the moulding facility in East Anglia which was acquired by Oyster when Hadida took control. A great deal of time, effort and money has gone into upgrading this fundamental part of the process which now has new state of the art machinery such as the new Faro laser measurement and mapping system that provides a new level of accuracy, efficiency and repeatability. There’s also been an influx of highly skilled personnel with impressive CVs that have joined from a number of different industries and companies bringing new knowledge and techniques to the shop floor. Alongside this the company continues to work closely with Lloyds Register, who validate materials and every hull and deck structure produced.

Main picture: the new Oyster 595 packs innovations and features from much larger Oysters into a yacht that can easily be cruised around the world by a couple or family, but also offers enough space and privacy for owners who may prefer to go cruising with professional crew onboard

The attention to detail throughout the process from detailed engineering, to precise weight control of every item has created a new era of advanced yacht construction for the company and this evolution of processes is ongoing. By 2022 Oyster will have moved to fully infused hulls and decks for both the 565 and 595.

After the core build, the process of fitting out has changed significantly too with far more items being built off the boat along with a completely new in-house facility that manufactures entire wiring looms that are fully assembled and tested before they are installed. Not only does this make for a lighter, more reliable and adaptable electrical backbone, assembling off the boat allows more space for those working on board.

When it comes to the finished item, the 595 is just as you’d expect for any Oyster where the standard of build and quality of finish is at the top of the game. But for potential owners, this new model marks an interesting datum in the range.

Sixty foot often marks the defining line between owner management and the addition of professional crew. And while all Oysters are designed to be capable of cruising the world, the reality is that long term liveaboards usually require more in the way of volume, both in stowage and accommodation. Sixty foot is often the starting point for many and this is where the 595 stands out against her smaller sister.

On the face of it, from the plumb bow and fixed bowsprit through to her powerful modern hull lines that open out to beamy sections aft and twin rudders, both boats share many of the same features.

On deck both the 595 and 565 have twin wheels in a crew cockpit that is sited further aft than what has typically been the Oyster norm. Both have a deep and secure central guest cockpit. Both are powerful, long legged cruisers that can be handled easily by two and yet have the capacity to accommodate six or seven people with ease thanks to the thoughtful layout of control lines. Even the volume and positioning of lockers plays a part in the handling with a large sail locker on the foredeck making it easy to hoist and lower spinnakers or code sails. Yet the Oyster 595 just has that impressive pedigree and feel of a much larger yacht. 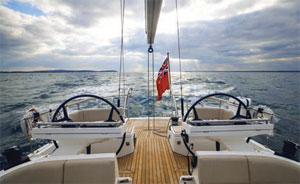 Above: the hull design has been refined since the last generation of Oysters to optimise the feel of the helm.
Below: the full beam master cabin has the space and luxury one would expect to find on a much larger yacht. 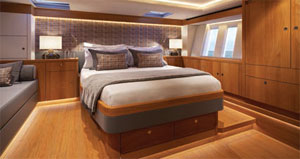 Below decks the overall layout with an owner’s double cabin aft, a guest double forward and a twin sea berth style cabin to port follows a well-established configuration albeit with a few handy tweaks. Separate access for the shared heads forward is one such example, as is the skippers’ cabin/workshop set just abaft the navigation station on the starboard side. Both are good, practical details that benefit from the additional volume that the 595 offers.

The longitudinal galley on the port side is another example of the benefits of more internal volume where surfaces increase by the square and stowage by the cube. There is ample worktop space and plenty of stowage and it’s easy to pass someone without a squeeze.

In the aft cabin, there is no question about the space, there’s plenty of it. The feeling is enhanced by the Seascape windows that allow tremendous visibility whether at rest or under sail, a feature that is common to the main saloon.

But it’s not until the sun goes down that you discover another subtle detail below decks, the lighting where discrete LEDs create three different moods; bright, soft and night mode. The C-Zone digital switching system controlled by Oyster’s proprietary digital app, Oyster Command, (which is another key part of the new generation of Oysters), controls the different modes which are selected on a simple touch screen system at the navigation station, helm position and can be broadcast on any screen across the boat. And while this might sound like a small detail, the overall effect delivers a significant step beyond the already luxurious, plush feel throughout.

For those more interested in the heart of the machine, here the company has worked hard on the layout and access to key systems, especially with long term cruising in mind. For example, the raw water inlet valves connect to a manifold that allows one inlet to be isolated while the other is serviced on the go. Easy access to the Commander units for the two hydraulic pumps is another example as is the array of master switches and so the list goes on.

Construction details have changed too. One of the most noticeable differences is the move away from foam cored stiffeners in favour of solid laminate panels with carbon capping that form ‘L’ and ‘T’ beams. This not only makes for an improved structure but reduces weight, improves the accuracy of the build as well as making more space available for equipment and other installations.

Among the long list of details that make this boat stand out, it’s her size that really strikes you from the moment you first step aboard. Even in the 60- foot league, the 595 feels big. Fortunately, the initial impression of size diminishes once you get under way thanks to the well laid out deck and control systems.

But size is at the heart of her performance under sail. This is a powerful boat with long legs. The smart distribution of buoyancy is an area that has been refined with each of the new models that has come from a collaboration with Oyster’s in house design team and Humphreys Yacht Design. With a fine entry forwards opening out into beamy sections aft the 595 certainly has the looks of a modern performance hull. The particularly clever bit has been in ensuring that the fore and aft distribution of buoyancy remains even when the boat is heeled to maintain a light feel on the helm. With such beamy sections aft, achieving this is no mean feat. But with the success of previous models to work from, the 595 achieves a refined balanced feel in conditions where a conventional setup would start to struggle. 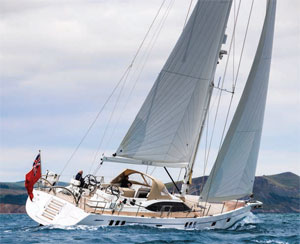 Above: two of the 595’s stand-out features are the safe, separate passenger cockpit and the powerful but easily handled electric furling rig which can be trimmed from the helm at the touch of a button

The other key feature that allows this is the double rudder configuration. While there is nothing new in this as a concept, achieving a light and balanced feel on the helm can be tricky to achieve. But here, Oyster have hit the bull’s eye and created a boat that delivers a sure-footed feel way beyond where you might expect.

Often the drawback with such a system is manoeuvrability under engine, especially at slow speeds, where the propwash flows between the rudders rather than over them.

To counter this, the 595 has powerful retractable bow and stern thrusters which can turn the boat around its keel at the touch of two levers. Parallel docking is also possible ensuring that so long as the available space is just over 60ft long, there are few berths that you can’t get this boat into. And if there’s one handling characteristic that creates a good impression and confidence, it’s leaving and returning to the dock.

So, while it would be easy to see this boat as yet another iteration of an elegant and popular style, the Oyster 595 represents a significant step forward, the next chapter in a new era for Oyster Yachts.