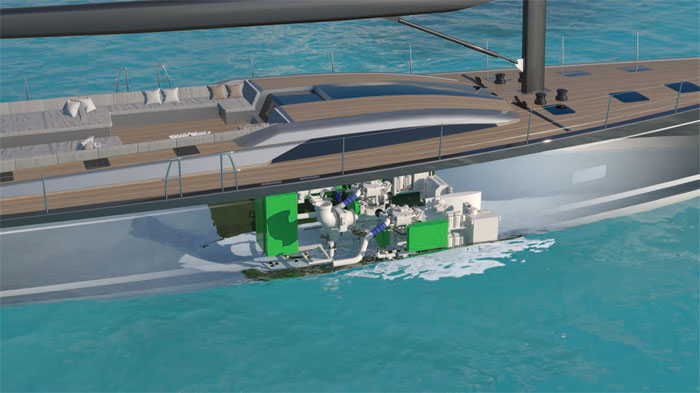 Over 100 years after the first (successful) diesel-electric yacht, Southern Wind explain how hybrid marine power is taking a big step forward in a size range that allows better use of industrial developments in other sectors

What will the next superyacht launched by Southern Wind Shipyard have in common with more than 400 New York City buses? Absolutely nothing, until you look in the engine room where you’ll find the same diesel-electric power and propulsion technology from BAE Systems. The SW96#04, due for delivery next summer, is Southern Wind’s first yacht with a hybrid drive, a major milestone for the shipyard. And their next diesel-electric project is already taking shape: the brand new SW108 Hybrid which has already been sold for delivery winter 2023. If the current level of interest from clients is sustained, Southern Wind expects to be building up to - two hybrid-powered yachts per year going forward.

It might seem strange to source a hybrid drive from the public transport industry rather than using a system designed from the outset specifically for marine use, but it actually makes a lot of sense. Most if not all of the commercial marine diesel-electric hybrid systems currently on the market are far too big for a 29-metre (96ft) sailing yacht and the leisure marine systems are much too small. The suppliers at both ends of the spectrum don’t see enough demand to upscale or downsize their existing products, so there’s a gap in the middle of the market from around 200 to 400kW (roughly 300 to 500hp). Or rather, there was a gap which BAE Systems has now filled, in partnership with Southern Wind.

There’s also the key issue of reliability. Diesel-electric marine propulsion has been around for more than a century, going all the way back to Jack Delmar-Morgan’s motor yacht Mansura in 1912, but none of the current marine-specific hybrid drives are anywhere near the maturity of BAE Systems’ technology, which has been deployed in more than 14,000 vehicles worldwide over the last 25 years. It’s proven beyond doubt to be extremely reliable with complete dual redundancy built in, and it’s backed up by a global support network of skilled technicians who already have years of repair, maintenance and troubleshooting experience.

BAE Systems’ hybrid expertise goes far beyond buses – it’s also the leading supplier in many aerospace and commercial applications, including ferries and offshore fishing vessels. It’s a smart move for Southern Wind to tap into this huge infrastructure and economy of scale.

Main picture: BAE Systems’ very well proven HybridGen technology has now been adapted for the yachting market in partnership with Southern Wind, whose own first diesel-electric hybrid yacht is due to launch this summer.
Below: the first SW108, currently under construction, is also going to be fitted with a HybridGen drive 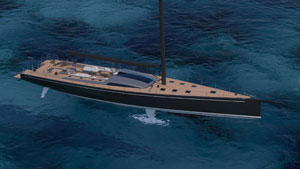 ‘We didn’t aim to be the first shipyard to do this,’ Southern Wind’s commercial director Andrea Micheli explains. ‘We always aim to be at the leading edge of technology but never at the bleeding edge. We’ve learned from the difficulties other shipyards have had in the past with hybrid propulsion and we didn’t want to assemble a system from different suppliers. Our clients have been asking about hybrid systems so we’ve done a rational evaluation of all the available solutions and BAE Systems was chosen on that basis.’

What are the benefits of hybrid propulsion? Apart from the fuel economy gain of a system that always runs at peak efficiency – conservatively estimated between five and 30 per cent for a Southern Wind hybrid – and the resulting reduction in carbon footprint, there are four major advantages for a sailing boat and especially for a long-range ocean cruiser that needs to operate in complete autonomy for weeks or months at a time.

First, there’s the ability to regenerate power via the propeller and keep the yacht’s batteries charged for the whole duration of an ocean passage under sail, running the sailing systems and some hotel systems without using any fuel. ‘When you’re crossing the Pacific for example it means that you can arrive with full tanks in a remote area like the Marquesas or Tuamotus and start exploring the small archipelagos immediately, without first having to go and refuel,’ Micheli says.

Second, the hybrid system’s huge battery capacity enables a yacht to operate for periods of time in silent mode with zero emissions, under power and at anchor. There’s no need to run generators overnight in an anchorage, which improves the quality of life for people on other yachts nearby as well as for the owner and guests on board. Silent running also means zero pollution, less disturbance to wildlife and a better experience for guests in wilderness areas and conservation zones.

Third, a hybrid system powered by two relatively small generators instead of one big engine allows a large yacht to circumvent the stringent IMO Tier 3 regulations for all new marine diesel engines with a power output greater than 130kW (174hp). Exclusion zones for noncompliant vessels already exist in the US and are due to be enforced in the North Sea, with other areas expected to follow. The nitrogen oxide (NOx) reduction requirements of Tier 3 are a challenge for yacht builders, Micheli says, because the solutions that have been developed for commercial shipping such as selective catalytic reduction (SCR) are impractical for a sailing yacht with a 300-450hp auxiliary engine.

The fourth big benefit of hybrid drives is their longevity. In a conventional installation, a yacht’s gensets are typically replaced (or completely rebuilt) after 20,000 hours and the engine after about 25,000 hours. By contrast, as Southern Wind’s technical manager Yann Dabbadie explains, the BAE Systems HybridGen drive is rated for 52,000 hours of running.

There are other benefits too, including massive availability of power for the yacht’s sail control systems in peak-demand racing scenarios and also for manoeuvring in harbour. For world cruising use, the HybridGen system’s high-voltage chargers can be connected to any frequency of shore power. 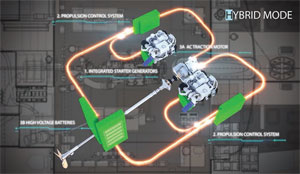 Above: the HybridGen setup offers complete dual redundancy while keeping all of the high-voltage elements of the system safely confined.
Below: one great advantage of hybrid power for a large ocean cruising yacht is that enough power can be generated via the propeller to cross oceans without using any diesel – and thus to arrive with full tanks 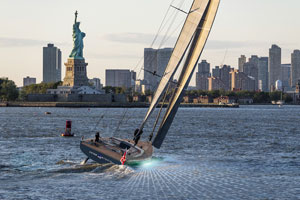 So what’s the catch? With all these clear advantages, why have yacht builders been so slow to adopt hybrid drives? ‘It adds about five or 10 per cent to the price of a yacht that costs several millions, so it’s the most significant single extra you can discuss,’ Micheli says. ‘But that isn’t a deal breaker. Our customers in Europe did not stop buying yachts when the VAT rate went up from six to 20 per cent. Rather, it’s a matter of culture and perceived reliability.’

Crews and owners aren’t very comfortable with the technology, Micheli says, because they don’t fully understand it Hybrid drives do require high-voltage power that is potentially lethal but in the Southern Wind/BAE HybridGen setup it’s safely confined to sealed units within the engine room. It doesn’t run all around the boat. ‘The architecture of the system is optimised for safety as well as weight, performance and reliability,’ Dabbadie says. ‘There are no loose terminals and all junction boxes are protected. Even if you accidentally opened a junction box, there is no way you can hurt yourself as the system will cut the high voltage automatically. The system is built to class requirements, it’s installed on ships already and we’re working closely with RINA.’

Another reason for the slow uptake of hybrid drives, especially for racing yachts and high-performance cruisers, is that they usually weigh more and take up more space than a conventional engine – but this one doesn’t. ‘It’s about a ton lighter than any of the other hybrid systems on the market,’ Dabbadie says. ‘The total weight depends on the battery capacity that the owner chooses to have but if you compare like for like it’s not much heavier than a normal diesel installation.’ It also occupies the same amount of space, and fits neatly into the existing engine rooms of most yachts that Southern Wind has built, so it’s a viable retrofit option for many owners.

Yacht owners and crews are also quite often sceptical about the availability of technical support and troubleshooting services when they’re anchored off a remote island or sailing in mid-ocean, thousands of miles from land. Once again Southern Wind has a solution, drawn this time from the offshore power industry. Crews receive training from BAE Systems as part of the yacht’s sea trials and a headset with a camera and virtual reality visor could possibly be supplied for remote assistance. A low-bandwidth satcom link is all that’s needed to provide expert guidance and to troubleshoot any problems remotely. For servicing or maintenance work in far-flung parts of the world, a local technician can be sent from the nearest service centre.

All of this, however, is just one part of a wider drive towards more sustainable yachting at Southern Wind. The efficiency gains of a new, remarkably efficient air conditioning system are expected to be even more significant for a yacht in typical charter usage than the benefits delivered by the HybridGen propulsion system. And that’s just the start of a new direction for this innovative shipyard.