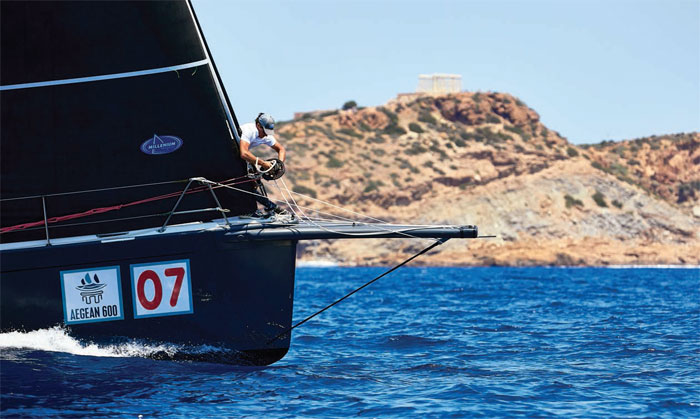 Launch a new 600nm offshore classic, attract a strong international entry, run the first race very well and send everyone home very happy – well, obviously they are going to ask you to do it again next year...

After two years of planning and anticipation, the inaugural running of the Aegean 600 in July 2021 provided the proof of concept needed to have this new race join the list of the world’s must-do offshore 600- mile classics. The hospitality shown by the organisers, the beauty and the challenge of the racecourse, and the strong enthusiasm shown by the participants all combined to make this first edition special for all.

Based on this positive response, organisers from the Hellenic Offshore Racing Club (HORC) have made a firm commitment with their partners and sponsors to offer this race again on an annual basis to be held during the first two weeks of July, with the next edition to start on 10 July 2022. This timing was devised to not interfere with other major events on the racing calendar and allow maximum participation among sailors and teams, many of whom have already signed on for this next edition.

‘We had in mind designing a race that would bring out all the interesting aspects of Aegean sailing,’ Livas said, ‘and this race proved that for everyone. We had everything: all wind speeds, all wind angles, short legs, long legs, tricky tactics at the corners, unique sunrises and sunsets and always in shorts and t-shirts. We had a good turnout for this first edition, as 56 paid entries were recorded, although 37 entries from 16 countries finally made it to the start due to covid related reasons and travel restrictions. We have already heard that many will come back and recommend to their friends to come and join us next year.’

Another entry in 2021, Peter Gustafson’s team from Sweden racing on his J/111 Blur, also did well in the scoring: 2nd in their division and 4th overall in IRC, and winning their division and 2nd overall in ORC scoring. They worked hard on this race, spending most it among rivals two to three metres longer, taller and more stable than their 36ft in length… not bad considering much of the race was sailed in moderate to fresh reaching conditions.

Gustafson explained that this was a tough but very satisfying race, where almost every leg had its unique challenge of variable weather conditions that required complete focus, whether it was working the zephyrs in light air or reefing and un-reefing in the fresh Meltemi. His team of nine was configured to take advantage of this, with fresh talent in the helmsmen and trimmers always able to shift gears as the conditions changed.

‘We spent months studying the weather on this racecourse,’ he said, ‘and were surprised at just how the conditions changed at every turn in the course. It was like every island has its own weather system with local effects. Regardless, this was a great race and we’re really glad we came to do it.’ High praise indeed from this team that also won their division in another past 600-mile race: the Middle Sea Race.

Even for the handful of entries that got bogged down and fell behind in the light air of the first part of the 2021 race, a few didn’t seem to mind so much: they simply retired and went cruising among the nearby islands! So, this race is unique in offering versatility in enjoyment for all levels of entries.

Accompanying the navigational and seamanship challenges presented by the racecourse, there is also an appealing sense of history throughout: the start/finish line is laid in front of the sea cliff of Cape Sounion whose top is adorned with the remains of the ancient Temple of Poseidon. From there nearly every island on the course has significance both in ancient history and timeless beauty, giving a sense of being at one with those countless generations of mariners who have sailed here for commerce, for war or just for fun. Even the large perpetual trophy for this race, which is an exact replica of an ancient Attican ceramic vessel from the 5th Century BC, is symbolic of the deep roots this culture has had with the sea. Takehome trophies for division winners include silver copies of ancient artefacts from 3,000 BC of the Early Cycladic Civilization until the 5th Century of the Classical Age.

This feeling starts on the downwind leg to Milos, birthplace of the famous Venus de Milo statue in the Louvre, followed by sailing within the spectacular caldera of Santorini, where the white of the ridge-top houses blends with the volcanic rock creating unique contrasts and images. Then it’s on to Kassos, southernmost island in the Aegean, and turning up to a long port tack reach to leave Karpathos to port, the nativity island of Athena, and the residence of Prometheus. The next rounding is at the Palace of the Grand Master of the Knights in Rhodes. The course then continues west towards the scenic island of Kos, home to the father of medicine Hippocrates, and Kalymnos, the island of sponge divers, while on the way there are many beautiful small islands, each with its own history. On the return leg the fleet is in the full teeth of the Meltemi, on a highspeed reach screaming past Mikonos with its own ancient and modern attractions, before returning to the finish at Cape Sounion.

What lay at the start and the finish to this epic journey is the official shoreside venue of this race, the world-class facilities at Olympic Marine. This is a superb full-service marina, with not only suitable dockage facilities for yachts of all sizes and drafts, but every support feature needed for the visiting yachtsman: full-service boatyard, chandlers for marine equipment, repair specialists in electronics and other systems, access to sail repairs, provisioning from a food market, etc. There are cafes and bars, and the yacht club offers excellent meal service to all. Getting team members to and from the boat is also easy: there is a shuttle service to the international airport in Athens, only 40 minutes away.

And for family and friends who want to come to visit but not sail the race, the local tourism board offers plenty of sites to visit throughout Attica. One favourite in the nearby town of Lavrio are the mines that produced the silver that the Athenians spent to build the large fleet of ships used to defeat the Persians in the Battle of Salamis in 480 BC – and thereby preserve their society as the foundation of Western civilisation. Even for those without an interest in ancient history, the Attica region has much to offer in recreational and cultural resources. 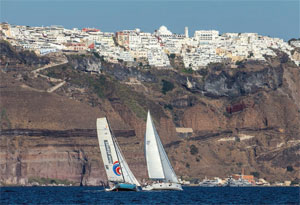 Above: the whole fleet sailed right through the spectacular caldera of Santorini, one of the 26 turning points on the Aegean 600 course.
Below: Blur Sailing Team came all the way down from Sweden, put up a great race and shared a fascinating account of their experience on social media 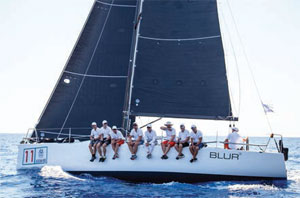 For those who cannot get enough of Aegean sailing, the timing of the Aegean 600 in mid-July 2022 is also just three weeks after the HORC’s annual Aegean Rally that lasts a week and consists of a series of day races to different Aegean islands every year. In 2022, the Aegean Rally will run its 59th edition which is considered to be one of the oldest offshore events in the Med. The Rally is a favourite among the Greek offshore fleet and a superb way to get accustomed to warm weather, blue skies, clear water, fresh breeze and the outstanding hospitality of the Greek culture.

Closer to the start of the race, HORC offers more practical steps in preparation, including a safety seminar for those needing knowledge and certification for offshore category racing taught by experts in this topic. Social events are also planned around all official functions, such as the opening ceremony, skippers’ meeting and awards. And in the busy days leading up to the start of the race the HORC members and staff are endlessly available and helpful in getting everyone registered and prepared to sail. The atmosphere for this is friendly and cooperative, focused on making sure everyone gets what they need to be ready for the race.

The race format is accommodating and flexible and will feature classes and awards that pertain to interests in not only full-crew monohull sailing, but will welcome line-honours, multihulls and double-handed entries as well. 71:54:00 is current monohull course record, set by Carlo Alessandro Puri Negri’s Farr/Felci 70 Atalanta II which won line honours and was also crowned the overall handicap winner of the inaugural Aegean 600 as the overall winner in IRC. While this is a fast time – an average of just over 9kts on the course – it’s believed to be beatable with the right team and reliably good weather.

The two Mocra entries in 2021 retired from the race, leaving a multihull course record still unclaimed, so this award could also be ripe for the picking. While some legs do have some upwind work, there is ample reaching and running in this race that should make for good fast fun on any capable offshore multihull.

If getting your own boat to Greece is not easy, consider a charter: there are several options available from X-Yachting Sailing Center, Fastsailing.gr and OffshoreRacingCharter.gr, all official charter agents for the race.

Regardless, whether on a record contender, a club racer with your mates, or on a family adventure, consider coming to the Aegean 600 to enjoy sailing the spectacular Aegean Sea, the Sea of the Gods.