The word according to Cowie 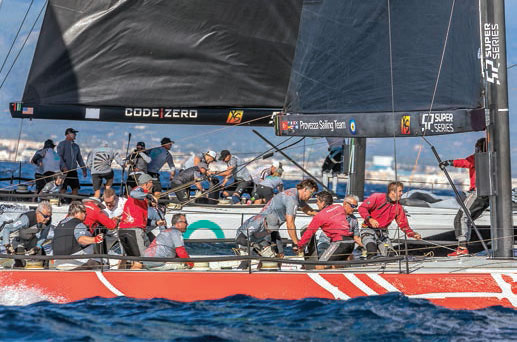 After the tightest of finishes to what has surely been the closest-fought season ever, Takashi Okura’s Sled crew won the 2021 52 Super Series title and the Rolex TP52 World Championships. Theirs is a popular victory for a hard-working, super-experienced team who take their sport seriously and are meticulous in their preparation and execution but, win or lose, they are usually smiling and are kings of the dockside banter.

Sailing under a USA sail number and flying the burgee of the New York Yacht Club, the crew are a truly multicultural mix, proudly embracing the Japanese culture at the heart of the team owned and usually driven by the discreet Mr Takashi Okura, but the core are a potent mix of very experienced largely Kiwi America’s Cup and ex-Olympians, alongside a tight group of Japanese sailors who have sailed with Mr Okura for many years. Italian Andrea Visintini is navigator. Aussie Adam Beashel is longtime strategist/tactician but travel for him was too difficult after the first regatta, Puerto Portals, so Francesco Bruni was quickly recruited. Another bump in the road was losing their Japanese sailors for the second regatta.

Much as he wanted to, unfortunately Mr Okura could not travel to be with his team this season and so six-times Cup winner Murray Jones moved from afterguard to helm, the first time he has steered a TP52 in the MedCup or Super Series… Quite the baptism.

Project management is shared between Don Cowie and Toshiro Honda, Cowie – who has sailed with Mr Okura since the early 2000s – running the technical side of the campaign while Honda is the primary day-to-day liaison with the owner. Rod Davis – who Cowie notes he has sailed with for 35 years since their medal-winning days in the Star – is not so much a traditional coach as a valued pair of eyes and ears on the water. He previously coached Team New Zealand to win the MedCup and the Azzurra TP52 programme.

‘Rod has sailed with me for 35 years and so I have taught him a lot…’ laughs Cowie. ‘But we coached ourselves in 2014-16 and that is how this team evolved. We only had one container. The boat captain was also the bowman. And eventually we needed a coach!

Main picture: Provezza struggles in Quantum’s dirt approaching a bottom mark during this year’s TP52 Worlds in Palma. After starting the short season solidly with a win at the opening event in Puerto Portals the Turkish entry seemed to lose momentum as others improved

‘Rod brings a lot for Mr Okura, especially how to drive the boat in certain situations. So maybe Rod is more of an afterguard coach. He has a great eye but he is not about sail set-ups and trim. He would not say he was an expert on sail set-ups, but he definitely has a good eye for the differences.

‘In particular, Rod brings calmness, making sure when we have had a bad day he picks good things not bad things to talk about. Generally when we have had a bad day we know what we did wrong, it is quite nice to hear what you did right. He is very good to have around and has won two world championships already this year, the RC44 and TP52. Usually you grow out of coaches, but not with Rod; he brings such a wealth of experience on and off the water.’

It speaks volumes for Mr Okura’s preference for privacy that in the history of the 52 Super Series he has only once ever been interviewed on the dockside. He will typically fly in overnight arriving just before the practice race and leave straight after the racing. Cowie recalls, ‘Mr Okura only stayed the last night once, in 2015, when he was top owner-driver and we were third for the season and even then he did not come to the prizegiving. Arriving on the morning of the practice race means that for him right away it’s full-on.’

Mr Okura is a veteran of the Kenwood Cup and the Admiral’s Cup and did eight years in the Farr 40 Class as a successful ownerdriver. He won the North American Championships in 2006. He also raced an IMS Farr 47 in Japan, winning the Japan Cup in 2004 and 2005 which was when he first raced with Cowie.

This is Mr Okura’s fourth TP52. Initially he bought the former Windquest which he raced at home from 2008 to 2014 and then when Cowie joined the TP52 programme they bought the previous Synergy/Rio in 2014. That was their first season on the 52 circuit.

Mr Okura still races at home on the ex-Swing Botín 40 which was refitted in New Zealand last year. Finally there is also Dennis Conner’s America’s Cup winning 12 Metre Freedom which he has had refitted and repainted exactly as it was back in 1980.

Sketching the Sled owner’s traits, Cowie says, ‘He is really cool to hang out with. He cycles and he flies, he is a good pilot. And he enjoys the team environment. We go back to the villa at night and have a “chat” – Rod calls it that not a debrief – then once that’s done we tend not to talk about sailing at all. He is one of the coolest owners I have worked for… and I have worked for a few.’

For Sled’s new tactician Francesco Bruni it was a big ask to step into the top of a circuit he had not raced seriously in for three or four years. ‘Francesco seemed a guy who would fit into the team environment which is important to us, very important. He was interested and we grabbed him.

‘He fitted in so well. He is such a nice, easy-going guy and a very talented sailor. It was important we did not have someone come in and reinvent stuff. “Checco” has nothing to prove and he is comfortable in his own skin.

‘You absolutely don’t want someone new come in and try and run the boat. We are a team that has been together since 2014 and we know how to do most things, we just needed someone to make sure we went the right way. And he did that. He is very impressive to sail with. He is a great team player but he is secure enough to back himself.

‘But the key for us, and it is a cliché, I know, is we win as a team and lose as a team. If I ever heard anyone “bagging” our crew they would be fired on the spot. There is a lot of that around. It is very unprofessional, especially in an owner-driver environment. Francesco came in, had seen our track record and did his job well.’

Sled have generally always been quick all round, but since winning Porto Cervo with an extra gear at the end of 2019 have had a clear edge in the breeze, being much more aggressive in their rig rake, as Cowie observes. ‘We played with the rig set-up a lot. Murray [Jones] is very clever when it comes to rig set-up and we started a trend in Porto Cervo and most have followed that trend.

‘But I do think if you were building a new boat now you would do it differently, maybe moving the whole rig back rather than raking so much. A lot of that is to load the rudder up a little more to give the owner-driver just a bit more feel. But Mr Okura is an excellent driver and he would certainly have been as fast if not faster than Murray because of the hours he has done on the TP52.

‘We also collect data on everything. We work with Nobu [Masanobu Katori] who is the president of North Sails Japan, but he did not come to events this year and instead we sent him all the data each evening and then overnight he analysed it. Andrea Visintini is also very handy at that and so we would look at his stuff in the evenings at the event and Nobu’s stuff in the morning. It was a good arrangement and it worked well for us.’