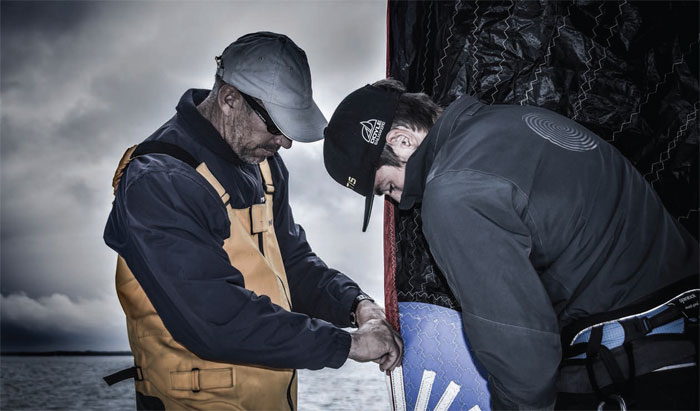 Since 2016, Stu Bannatyne has been part of Doyle Sails International’s line-up of sailing superstars who bring their experience and expertise to clients’ projects, first in analysing their sail inventories and identifying areas for improvement and then in helping their crews get the best out of them to post good results on the leaderboard.

In a pro career spanning nearly 30 years, Bannatyne logged hundreds of thousands of miles of grand prix ocean racing and earned a reputation as one of the best in the business. King of the Southern Ocean is one of the tags attached to the unflappable giant as a mark of respect for his ability to drive boats hard in high winds and big following seas.

He has competed in eight round-the- world races and won four. 14 Sydney-Hobarts, nine Fastnets and eight Transpacs are just some of the events on his resumé that have made him one of the most soughtafter ocean racers in the world.

One recent campaign was with the Pac52, Warrior Won, which swept the top prizes at the 2021 Transpac. Bannatyne had been involved with the boat under its previous owner and continued when Chris Sheehan took it over. For the 2225-mile Transpac Bannatyne was tactician and watch leader, complementing a longer-term onshore role managing the rating optimisation for multiple rules, helping with schedule management and constantly pushing development of the sail programme.

Main picture: as a Doyle Sails grand prix project rep, Stu Bannatyne played a key role in developing and optimising the sail wardrobe for the Infiniti 46 DSS foiler Maverick, which was an early adopter of Doyle Sails’ game-changing Cableless and Structured Luff technology

Warrior Won, launched in 2017, gained significant benefit from Doyle’s Structured Luff and Cableless sails, without requiring any modifications to accommodate the new technology. ‘As is typical with these slightly older designs, the maximum allowable loads on the rig and structures are less than ideal and less than more recent 52 designs,’ Bannatyne explains. ‘But with our technology, we are able to use the existing load limitations and achieve a much greater performance than was possible with the old sail designs.’

Describing his role within the team, Bannatyne says: ‘I bring ideas into the mix on sail inventory concepts and then work as liaison between the Warrior Won team and the Doyle design team to ensure that the sails we receive on the boat are just what we need to optimise the inventory for each race and rating system.

‘We do this early to allow optimal design and build time, but most importantly to allow enough testing time to verify the performance of the sails and where they fit into the crossover chart. The job is never complete, but we endeavour to start each race with high confidence in our crossovers and polars, which really helps in managing the sail changes and choices we make in each race.’

With his affable and slow-talking demeanour and vast experience, he also brings a highly valued sense of calm on board when the going gets tough. Growing up in New Zealand, Bannatyne followed the traditional sailing route up through the dinghy classes and won the world youth title in Lasers before graduating into Finns. His first taste of ocean racing came in 1993 when Grant Dalton gave him a try-out in the Fastnet Race during the lead-up to his New Zealand Endeavour Whitbread Round the World race campaign. ‘He came to our attention as he had been doing well in Lasers so we gave him a shot in the Fastnet to see how he went,’ Dalton recalls.

Kevin Shoebridge, Dalton’s longtime lieutenant, took the youngster aside and gave him some advice, finishing with a cautionary note not to get drunk in the after-match celebrations and make an idiot of himself. Sure enough, New Zealand Endeavour won the Fastnet and in the dockside eruption that followed Bannatyne partied so hard he fell overboard. Dalton and Shoebridge looked at each other and agreed, ‘He’s perfect. He’s in.’

Bannatyne chuckles at the memory and recalls it was a breezy Fastnet. It was his first experience of big boat racing, in fact his first time steering by wheel.

On the homeward run, with the IOR maxi ketch fully loaded and charging downwind in 20-25kts, he was called up to helm in the middle of the night. ‘I had never steered by instruments before. At first it wasn’t going that well, but Glen Sowry told me to forget about the instruments and trust my instincts. So, I just sailed by feel after that and it went pretty well.’ Well enough that Bannatyne went on to taste his first round-the-world race victory on New Zealand Endeavour. ‘He proved to be a very good driver, a great team player, somebody we needed,’ says Dalton.

Bannatyne’s stellar career was launched. Asked about what keeps drawing him back to ocean racing, he jokes that an ability to quickly forget the bad times is important. More seriously, he thrives on the total concentration required to keep driving hard in that narrow zone between success and failure. ‘Keeping performance high without wiping out is what it’s about,’ he says. Backing up sailing talent is a strong technical grounding. Bannatyne qualified as a mechanical engineer at Auckland University, always with an eye to working in the marine industry. ‘My plan was to work at something like Farr Yacht Design, or somewhere involved with structural engineering on racing yachts, so it fits perfectly with the work I do now with Doyle Sails.

‘I have used my engineering background a lot in my pro sailing career, working as liaison between designers, engineers and the sailing team. It is good to have a common language and understanding of the technical side of things. 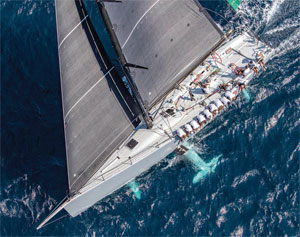 Above: the major refit and DSS foil retrofit of the Reichel/Pugh 60 Wild Joe was another Doyle Sails/ Infiniti Yachts collaboration in which Bannatyne played a leading role.
Below: Bannatyne recently won the 2021 Transpac Race as tactician and watch leader aboard the Pac 52 Warrior Won after a longerterm role managing the boat’s rating optimisation for multiple rules and developing its sail wardrobe 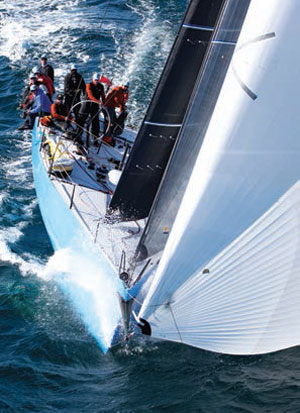 ‘It is a very satisfying part of what I can bring to sailing programmes, to go a little more in-depth into the technical aspects of whatever we are developing, whether it is sails, or masts or even boat structures. Also, coming at it from a sailor’s perspective I can work to ensure that we end up with a usable and practical solution without building it too heavy, or cumbersome.’

All of Bannatyne’s talents and expertise have been marshalled for an exciting new grand prix level yacht that is the first to be designed from the outset to utilise all the benefits of Doyle Sails Structured Luff and Cableless technology. This is the Infiniti 52, designed by Hugh Welbourn with a fixed keel and a single DSS foil. It is the brainchild of Infiniti Yachts owner Gordon Kay. Bannatyne had worked on two previous Infiniti projects, the 46- footer Maverick, and a significant refit and DSS retrofit on the Reichel- Pugh 60-footer, Wild Joe. ‘Gordon Kay wanted to bring a 52-footer to market requiring fewer crew than the TP52s and targeted towards coastal and offshore events like the Fastnet, Sydney-Hobart, Caribbean 600, Transpac and Transatlantic races,’ says Bannatyne. ‘My responsibility was for the rig and sailplan.

‘Gordon has seen the Structured Luff and Cableless sail technology we introduced on Maverick and Wild Joe. He has totally bought into the technology and was keen to incorporate that to the fullest extent possible with the Infiniti 52 project.

‘We have been able to realise some pretty nice weight savings: lighter structure, lighter mast, lighter and lower profile rigging, lower loads throughout. We are looking at a 30 per cent reduction in rig compression and forestay load for the same headsail luff profile of a TP52 .’

Bannatyne describes working with Welbourn as a very collaborative process. Welbourn provided a preliminary VPP based on a basic sail-set he uses as a design starting point. Doyle Sails then refined the VPP for its Structured Luff and Cableless technology and fed that back to Welbourn. At the same time, Doyle Sails worked closely with sparmaker NZ Rigging, providing load studies and rig tuning suggestions based on its CFD tools.

‘It was an iterative process that worked extremely well,’ Bannatyne says of the dialogue that went back and forth, banking the gains each technology partner was able to bring to the project. Some of these gains were to focus on reaching and downwind performance, considering the type of offshore racing envisaged for these boats and the conditions in which the DSS foil would provide the greatest advantage. ‘Upwind performance is also important so Hugh applied a lot of attention to the keel and rudder optimisation and the balance of the boat.’

Two boats were bought off the plans and the first, for the Finnish Tulikettu Racing programme, was due to begin sail trials and testing in England towards the end of 2021.

‘A lot of interested parties are lining up to see how this turns out,’ says Bannatyne. ‘This is breaking new ground in the sense that it is the first to combine Hugh Welbourn’s DSS technology and Doyle Sails Structured Luff and Cableless technology in a project designed from the outset to gain maximum benefit from both. ‘It’s evolution, not revolution,’ he adds. ‘These concepts are well proven on a lot of race boats already. Bringing them together in this fully committed application takes us further down the evolution path.”