Flying higher (than ever) 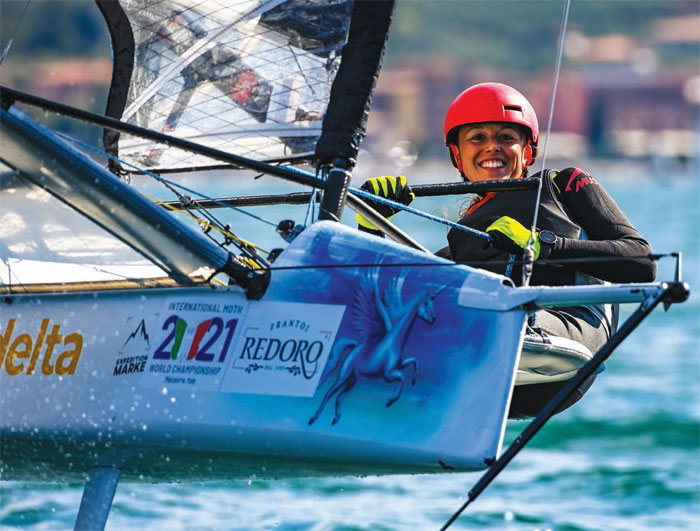 Andrew Pindar, trustee of The Magenta Project and long-time campaigner for greater gender diversity in sailing, shares a recent example of how real and perceived barriers are beginning to be overcome and shares the lessons learnt in the process.

The International Moth Class has proactively been working to encourage greater female participation within its fleet. The Moth World Championships that were held on Lake Garda, Italy in early September provided an opportunity to open the doors and encourage talented female sailors to join the event alongside the class’s top male sailors.

The Moth Class president Luca Rizzotti, who also sits as a trustee of The Magenta Project, is well versed in the thought process and was able to draw on his wider experience in the industry. He put together a programme that not only encouraged and challenged more women to participate in the event, but also ensured an equable and competitive platform across the International Moth fleet.

With the closest thing to an organiser’s manual tucked away in various paragraphs of the World Sailing Trust’s 2019 Strategic Review into female participation in the wider sport, Rizzotti used his experience of Foiling Week, of which he is founder and president. The cutting-edge sailing event, which he formed eight years previously, was the hunting ground for relatively innocuous initiatives that have proved invaluable to the development of this pioneering event. These included designating a specific part of the programme to women, promoting an open-arms welcome and simply recognising that peeing off the back of a boat might be easy for guys, but is somewhat less so for girls.

Rizzotti feels very strongly that male voices need to be part of the discussion around gender diversity in the sport of sailing, and he maintains that looking at events such as Foiling Week and the recent Moth Worlds through an inclusive lens is critical for the success of the sport.

Main picture: the International Moth Class staged a very successful Women’s Camp at Malcesine on Lake Garda in the run-up to the recent Moth Worlds. 18 women attended, including Franziska Mage from Germany (pictured above)

‘It is important that we get more men involved in the discussion around gender diversity as we need to see more women in the sport,’ he says. ‘Through Foiling Week I have been in a position to do this and be a stepping-stone for women into the sport, but I feel very strongly that the dialogue needs to come from both women and men and that this critical male support cannot stop in the meeting room but needs to be clear and visible on the water as well.

‘In five years’ time my dream would be to have at least 30 per cent of women competing in all the leading events in the sport. But the big question is how to achieve that acceleration? Seeing women achieving in any sport is a beacon to show other women what they can achieve. But we also need to work at the grass roots, show it is possible, and ensure that there are no filters at the start. A mandatory policy around equality, even if is selfimposed, that both participants and event have to sign would be a start. It exists around environmental sustainability, so there is no reason to not have something similar around diversity,’ he says.

Believing very strongly that one can only succeed by doing, and with Covid travel restrictions dominating the very possibility of a 2021 Worlds, consideration and planning around how to make attendance and participation of women at the event possible and worthwhile, was a brave challenge. So with more faith than a new base jumper, and with a few short weeks to go, Rizzotti and his small gang pulled the rip cord and announced the running of a Moth Women’s Camp ahead of the championship regatta. Six boats were made available and soon 16 applications landed on the mat, triggering an instant increase to eight available places.

The word spread like wildfire through social media channels, resulting in four more women rocking up to Malcesine, and rather than turn them away and disappoint, the resourceful International Moth Class made sure all-comers were able to participate. In addition, another 10 women joined the camp with their own boats.

‘I was very impressed by the amount of positive response we had on the women’s camp, from women just deciding to pass by since they were training nearby, to others asking to set up more women’s training weeks as soon as feasible,’ adds Rizzotti.

The fundamental concept for the Women’s Camp was to provide a semi-contained environment with dedicated coaching and RIB support. A culture of encouragement soon created a nurturing environment, allowing sailors to have fun whilst learning by doing, breeding the confidence to give it a go and push themselves beyond self-imposed limits. Quite different to the women’s previous experiences of being thrown in at the deep end, to sail or fail, in 20kts of breeze. 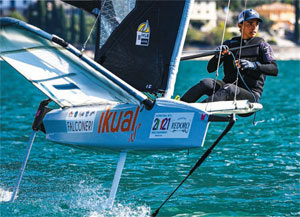 Above: the Finnish Olympic athlete and professional sailor Sinem Kurbay was among the competitors at this year’s International Moth World Championships, held at Malcesine on Lake Garda 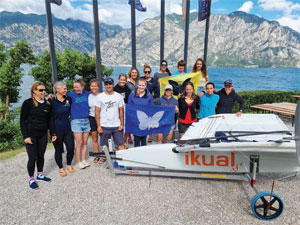 Finding their feet on the foil whilst training out on the water soon led to them finding their voices ashore as they came together over dinner at the end of the camp to celebrate their time together and pore over the lessons learnt. With a palpable buzz in the air, much animated discussion ensued with a collective applause for the success of the camp.

Given that the group came from a variety of different dinghy classes, they started sharing and developing ideas which could accelerate female participation in those classes as well. In turn this started another conversation about how they could become part of a movement, indeed a Magenta Movement, which would bring together girls and women to advance their cause throughout the world of sailing.

The board of the Magenta Project is now absorbing the lessons learned from this Women’s Camp and is listening to the clarion call that rang out from the dinner for the organisation to create membership categories, designed to represent female interests and champion the overdue emancipation of women in the sport. The empirical evidence of this approach is hard to refute as the camp triggered a threefold increase in the female/male participation ratio at the Moth World Championships, only adding to the fleet size and detracting from no one as a result.

No surprise then that the International Moth Class has agreed to always run Women’s Camps ahead of their World and European Championships and the Class has appointed Helena Scutt (USA) to succeed its outgoing vice-president Scott Babbage, with a specific brief to represent women in the class.

Echoing Rizzotti’s belief that it is critical for more male voices to support the drive for greater gender equity, it was humbling to see the support from the men in the class. Not only are they welcoming women into the game but are doing so visibly by proudly carrying a Magenta moth on their boats.

Click here for more information on The Magenta Project »