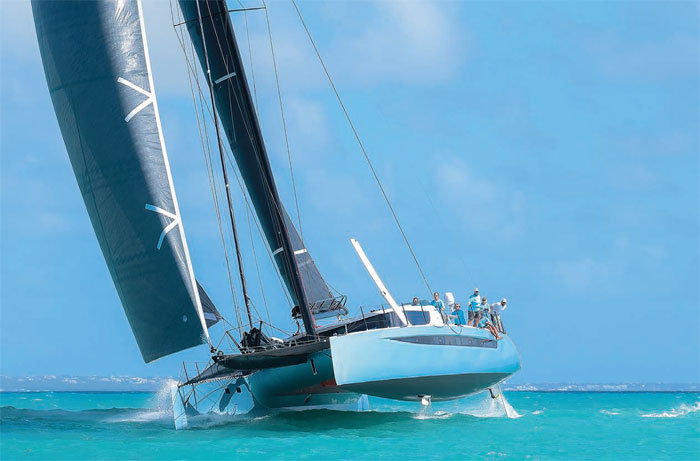 Of all the regattas lost in the last 18 months the cancellation of a full Caribbean season was perhaps the most dispiriting to sailors around the world. Now this fabulous marker of sailing life ‘as normal’ is back in action

Like the sun coming out after a storm, competitive sailing has resumed in the Caribbean. It might not be readily apparent, especially for those not in the region, because for two seasons now most major Caribbean regattas have been cancelled or postponed due to precautions and protective protocols against the pandemic. However, in a region that boasts more sea than land, year-round warm temperatures and steady trade winds, local club racing, junior regattas, and learn-tosail programmes have proved the perfectly socially distanced activity post quarantine. Combine this with increasing vaccination rates, island governments’ progressive pandemic management and race organisers focused on world-class sailing competition and the 2022 Caribbean regatta season is a bright spot on the horizon.

‘We are incredibly lucky in the Caribbean that over the last year although island to island travel has been challenging and international regattas in the main did not take place, most islands were able to sail locally,’ says Alison Sly Adams, president of the Caribbean Sailing Association (CSA) and president and commercial director of Antigua Sailing Week (ASW).

Main picture: St Maarten’s Caribbean Multihull Challenge (CMC) was one of only two major regattas that went ahead this year in the Caribbean with a fleet of eight cats and tris competing. Next year’s edition will feature a new 60-mile drag race

‘It’s resulted in an increased interest from new people entering the sport and many people getting back onto the water more regularly over the last year. We’ve seen a massive increase in women entering the sport through initiatives like Steering the Course, innovative new events like the Windward 500 which created an ability to race with absolutely no contact with other boats and crews, and governments being able to work through the kinks to simplify immigration procedures.

‘What this means for the next year’s international regattas is that the local sailors are ready to throw down the gauntlet and promise the most competitive racing in years.’

2021 Recap – a year focused on local racing
Only two of the nearly 20 major international regattas on the CSA Calendar for 2021 took place. First, the Caribbean Multihull Challenge (CMC), sailed with eight catamarans and trimarans in February, when the St Maarten team of Bernard “Appie” Stoutenbeek and Arthur Banting drove their Dick Newick-designed 36-foot trimaran, Tryst, to first in the CSA Multihull Racing Class. A new feature for the 2022 CMC is the Caribbean Multihull Challenge 60-Mile Sprint, a one-day “drag” race on the windiest day of the three-day regatta, where any participating multihull that can complete a 60 nautical-mile course — St Maarten up to St Barths and then around Tintamarre and then down the Anguilla Channel rounding the western end of St Maarten and back up to Simpson Bay — in under six hours will win. 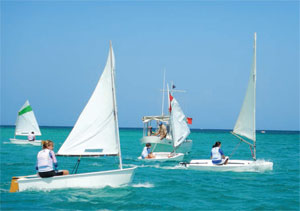 Above: initiatives like Steering The Course have encouraged many women to try racing in the Caribbean
Below: Victor Wild’s new Botín 50 Fox won the spinnaker class at this year’s St Thomas International Regatta. The team plans to return next year and defend their title 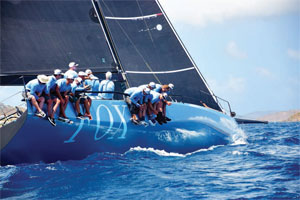 ‘The attraction of racing in the Caribbean for Fox is the great weather, beautiful scenery, and sense of adventure. Who wouldn’t want to race around tropical islands with friendly people? It's just a few hours travel from America,’ says Wild. ‘We are in the initial stages of our 2022 planning. We would love to visit STIR, the BVI Spring Regatta, Les Voiles de St Barth Richard Mille, and ASW. These events offer the best competition and reasonable logistics. We can ship our boats directly to Antigua or St Thomas from the USA.’

STIR 2022 will offer its signature mix of round-the-buoys and roundthe- rocks courses for racing, cruising and one-design classes. Key among the latter are IC24s, modified J/24s which the St Thomas Sailing Center offers for race charter.

Fox wasn’t the only international team to sail in the Caribbean in 2021. Several teams that that came to compete, only to find regattas cancelled, continued to sail, enjoying destination cruising and a chance to enhance their local knowledge to be even more competitive in 2022. There was a Polish team that flew to St Maarten to race in the Heineken Regatta and still chartered their Volvo 70 for the week. The crew aboard the Spirit 111 Geist were already in St Barths when the St Barths Bucket Regatta was cancelled, so they too sailed on their own and look forward to their first Bucket in 2022. The Cookson 50 Lee Overlay Partners, a frequent ASW competitor owned by the UK’s Adrian Lee, participated in several local races run out of the Antigua Yacht Club (AYC) in June. The race committee and 12 -20 regular island racers obliged the larger vessel by setting up and joining in longer courses set specifically to accommodate the Cookson. A few local captains used these races to enlist youth crew from the AYC and the National Sailing Academy sailing programmes thus enhancing the depth of local talent for international competition in 2022.

Below: the iconic St Barths Bucket superyacht regatta was last held in 2019, but is due to return in 2022 with many of the worldʼs largest and most spectacular yachts expected to attend. The 90ft class is a new addition to next yearʼs Bucket 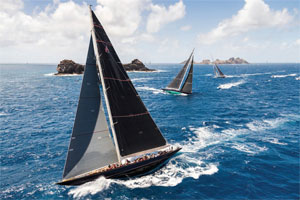 Also in June, St Barths welcomed the 15th edition of the biennial Transat en Double, a transatlantic race from Concarneau, France, to St Barths, that saw 18 double-handed teams participate aboard the Figaro Beneteau 3, a foiling one-design monohull. Much like Les Voiles de St Barth Richard Mille which plans to return in 2022, the Transat en Double’s arrival celebration included a festive race village and concerts along the docks in Gustavia. This is a sign of the times to come as Caribbean organisers, while focused first on maximising racing and challenging courses, are exploring ways to offer a safe combination of sailing and onshore fun.

Looking ahead to the 2022 season
The season kicks off with the 8th Royal Ocean Racing Club (RORC) Transatlantic Race, leaving Lanzarote in the Canary Islands on 8 January en route to the Camper & Nicholsons Port Louis Marina in Grenada, the same venue where Grenada Sailing Week (GSW) takes place later in the month. The transatlantic brings several hot racing and race charter vessels to the region for the season. New is a collaboration between the RORC and Yacht Club de France, and between the latter and the International Maxi Association (IMA), to promote this well-established event to its members and affiliated clubs. Official entries include Jason Carroll’s MOD70, Argo; Stefan Jentzsch's IRC56 Black Pearl; new owner Andrew Hall’s Lombard 46, Pata Negra; and Richard Palmer’s JPK 10.10, Jangada.

‘Our campaign starts with the Rolex Middle Sea Race (in October), followed by the RORC Transatlantic in January and the RORC Caribbean 600 in February,’ says Palmer. This will be our third time in the RORC Caribbean 600. We love both the race itself and all the shoreside activities in Antigua. Racing around the Caribbean islands has many tactical challenges, with warm seas and plenty of sunshine and that’s what keeps us coming back.’ The St Maarten Heineken Regatta will be the first Caribbean event to welcome the IMA for their Caribbean Circuit. IMA yachts will continue to Les Voiles de St Barth Richard Mille and Antigua Sailing Week (ASW).

The St Maarten Heineken and ASW will also give new trophies for women in sailing. This follows the islands of Antigua & Barbuda, Barbados, the British Virgin Islands, St Maarten, and St Vincent & the Grenadines hosting events as part of World Sailing’s Steering the Course global women’s sailing festival in May. Plus, as part of the Antigua and Barbuda Women in Sailing Mentorship Program launched this year.

Here’s how to enter now
Teams are encouraged to express interest or register for 2022 Caribbean regattas as early as possible to enable organisers to plan ahead. The CSA provides a central page that gives links to each major event and the latest COVID-19 entry protocols for each host island. In addition, the CSA also provides a link to many race charter companies. Book charters early too. For example, as of July, UK-based LV Yachting had 6 charters sold for three regattas: the BVISR, Les Voiles de St. Barth Richard Mille, and ASW. In addition to regatta charters for novice and experienced racers alike, companies like OnDeck in Antigua offer opportunities for passage and mile-building inter-island between regattas. For example, from Antigua to Barbados in January for Barbados Sailing Week, then to Grenada for GSW, and back to Antigua. Next year indeed looks like a bright spot on the horizon for Caribbean racing and regattas.

New too for 2022, the St Barths Bucket will also offer a 90-foot class in addition to its Corinthian Spirit class, which provides yacht owners with the option of racing with their permanent crew without committing resources to race optimisation. The BVI Spring Regatta & Sailing Festival (BVISR) is preparing to include more classes and opportunities to race for sailors from across the Caribbean and the globe and will host its 50th anniversary event in 2023. The sport boat class developed for the 2020 ASW will finally launch into fruition in 2022. This class is for lightweight race boats under 30 feet with lots of sail area such as Melges 24s, J/70s, Mini 650s, and other small planing boats. These pocket rockets will get their own start, custom courses and multiple races.

Both the BVISR and ASW were recognised this year by the Newport, RI-headquartered non-profit, Sailors for the Sea, as Clean Regattas for 10 and 9 years, respectively.

A new Caribbean regatta, the Caribbean Ocean Racing Club’s (CORC) Windward 500, which enjoyed a successful proof of concept this year with a handful of boats, has ‘green’ and COVID-19 protocol-friendly innovation as part of its theme. On the green side, the event lends visibility to renewable energy, sustainability, and resilience projects throughout the region. On the innovative side is its flexibility and a strong virtual element.

‘You pick your start/finish island, so if you performed well at ASW and are headed south to enjoy the Tobago Keys in the Grenadines you can start the race at Bequia. If you pulled into Martinique to enjoy the fine French wine and cheese offerings, you can start at Diamond Rock. If you cruised down to Grenada to secure your haul-out space in one of the many yards, you can start and finish there,’ says Steven Kern, race organiser. ‘You will get to use World Sailing’s Appendix WP for racing around waypoints, and Experimental Appendix RV, which simplifies the rules for racing in reduced visibility, between sunset and sunrise. You will also enjoy the virtual skippers’ briefing and prizegiving. You will report to the RC by WhatsApp by sending them photos of your chartplotter as you pass through each gate.’ 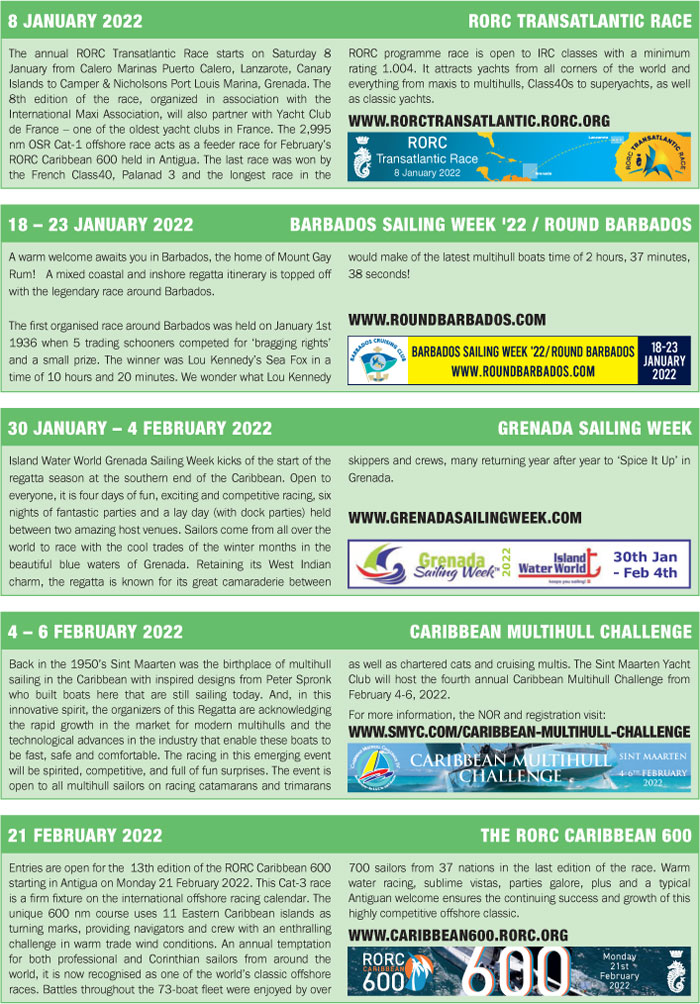 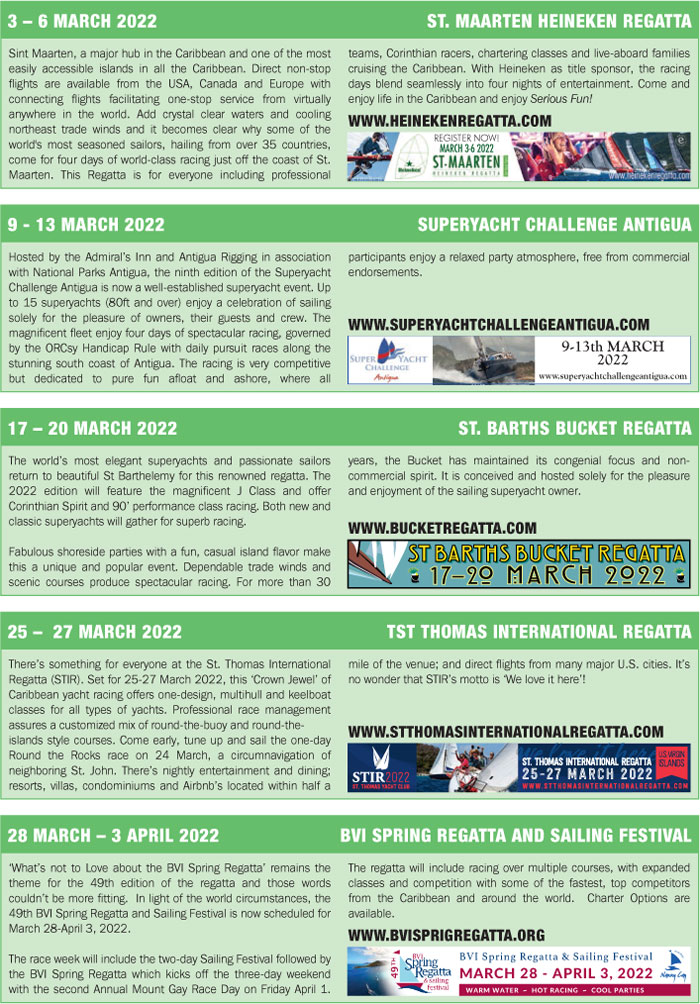 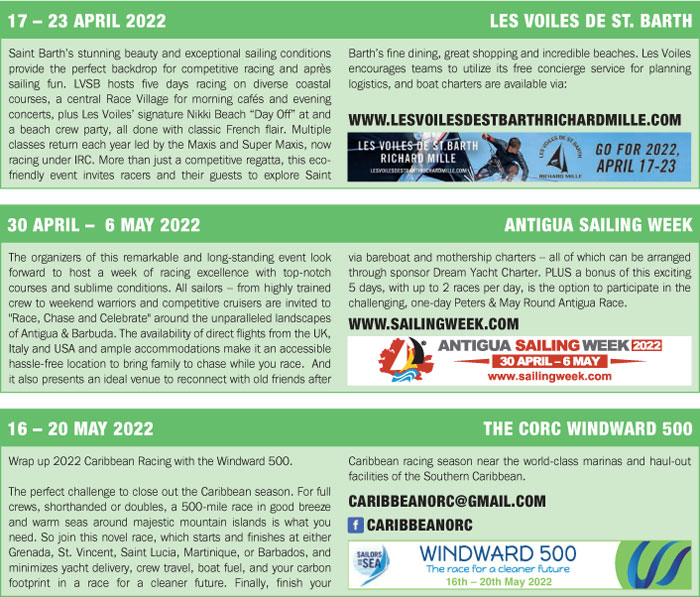 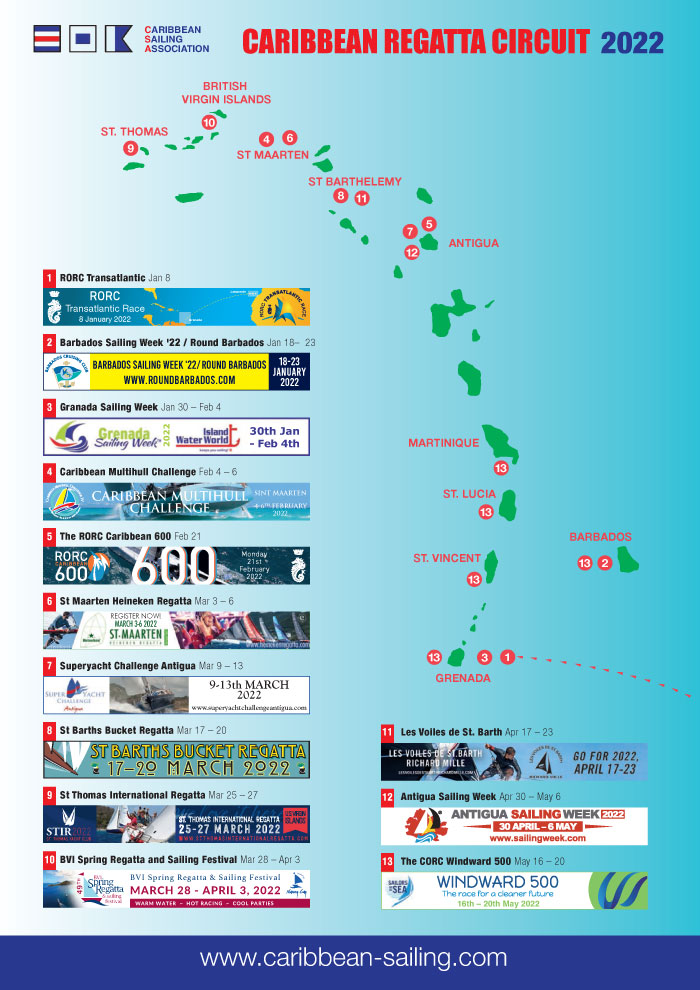 Click here for more information on the 2022 Caribbean regatta »