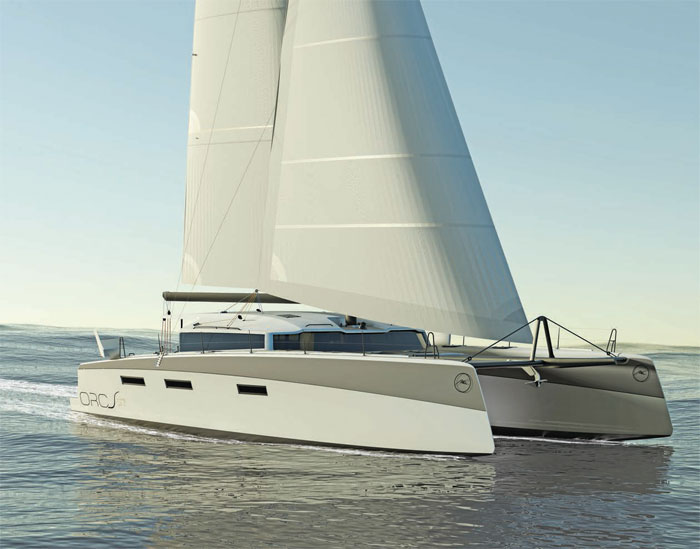 At the heart of the world’s ocean racing capital it’s no surprise they also know a thing or two about creating rather fine large cruising cats...

Who likes the idea of leaving the TP52s behind in a boat that costs half the price and also makes a fantastic family friendly cruiser? Marsaudon Composites’ Ocean Rider Catamarans (ORC) can do all that and more, and their new ORC57 promises to be both the fastest and most comfortable model yet.

Marsaudon Composites are based in Lorient, in the former WW2 submarine base now known as “La Base”. The factory is quite literally a stone’s throw away from many of the fastest boats in the world, some of which were built by Marsaudon Composites themselves. The influence of La Base and this racing heritage is clear to see in every Ocean Rider Catamaran, whose motto of “simplify, then add lightness” was taken from Lotus Cars founder Colin Chapman but for Marsaudon Composites means creating a boat that is extremely fast and extremely comfortable but not necessarily luxurious.

The ORC50 and second-generation ORC42, previously known as the TS5 and TS42 and launched in 2017 and 2020 respectively, have enjoyed unparalleled success on the racecourse. Thirty-three boats have been launched to date, and they have won their class in three of the last four ARCs as well as the last Fastnet Race, Les Voiles de St Bath and Spi Ouest.

Despite its race pedigree, the ORC42 is a very forgiving platform with generous hull volume (at least when compared with an Ultime) which means the boat also performs well when loaded with cruising gear for an extended voyage. For the ORC50 the performance dial was turned up a notch further, leading to a very exciting boat but one that is less forgiving to less experienced crews and has a proportionally lower load carrying capacity.

Main picture: the ORC57 is the brand new third generation design in a range of racer-cruiser catamarans that puts performance at the top of the agenda. Designed by Marc Lombard, it is expected to be blisteringly quick but also easy to sail

The Lombard design office was thrilled to be entrusted with the design of the 57, and lead designer Eric Levet says, ‘even though we didn’t design the ORC42 or the ORC50, we were huge fans of the boats. It’s this kind of project that our team gets excited about being involved in. Our challenge was to combine the best elements of the 42 and the 50, and that meant designing a boat that was as easy to use as the 42 but with the performance to match what could be delivered by a scaled-up version of the 50. We’ve invested heavily in the project and I’m confident we’ve delivered on that brief.’

Marsaudon Composites’ CEO Damien Cailliau says, ‘with the 50, 20kts feels quite calm, 25kts feels quite fast but you can still put the pilot on and go inside, whilst 30kts is possible when pushing hard with a race crew,’ so if the 57 is a step up it will be quite something! Polars for the boat, developed independently using Wolfson Unit software, suggest an upwind VMG of more than 9kts is achievable in the right conditions, which means the boat will be a rocket even in this supposed weak spot of multihulls. At 11.3T (light ship), the boat is over 2T lighter than some more expensive boats that might nominally be considered to be in the same category, and when sailing off the wind the ORC57 will have a performance edge that reflects that.

Both the mast (optional carbon version is naturally provided by Lorima, the Imoca mast supplier located next door) and the inclined daggerboards have been moved further aft than on previous models, creating space for a range of different sized headsails and leading to an efficient high aspect-ratio mainsail. This solution should allow for the boat to remain well-balanced and well-mannered under a wide range of different sail configurations depending on the wind conditions and on whether the boat is being cruised or raced.

The design of the Ocean Rider Catamaran range aims to generate a feeling of connection between the sailor and the sea, and aboard the 57 this is enhanced by larger windows than on previous models. The 57 comes with carbon tiller steering as standard, but is the first model in the range to offer a wheel steering option, and this system has been carefully designed to maintain the feeling of connection between the helmsman and the rudder. All sail controls are led back to the helming positions on each side leaving the central cockpit as a rope-free lounge area that is well protected from the elements, in a configuration similar to that on the 50 which has proven very popular with existing owners. 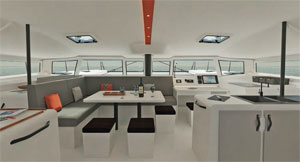 Above and below: the interior of the ORC57 takes live-aboard comfort to a new level while preserving the light weight, high performance DNA of the ORC brand. Extensive use of foam-cored composite furniture saves a lot of weight, while this design also features much larger windows than previous models for increased natural light

Marsaudon Composites employs 82 staff and will produce nine Ocean Rider Catamarans this year. The team now includes an interior designer and structural engineers, as well as a highly skilled build team. These capabilities allow for a semicustom approach, with customers able to modify the interior based on their needs or choose full carbon construction if desired. Even the base version of the ORC57 is made via an infusion out of fibreglass with a PVC core and with substantial carbon reinforcements to increase stiffness where it matters most. The quality of the composite lay-up is a source of great pride within the company, and the finish is so smooth that the need for interior linings to hide the composite work is eliminated. Cailliau has a background in aerospace composites production and his influence is clear to see in an impeccably well organised boatyard.

Interior design has been a major focus of the ORC57 when compared with previous models, with the extensive use of curved foam-cored composite interior furniture providing a soft and elegant touch whilst also saving weight. Indirect LED lighting and leather wardrobe handles add a touch of class, demonstrating once again the company’s dedication to developing solutions that increase comfort whilst reducing weight.

In terms of configuration, while the base version includes four double cabins, an optional “owners’ hull” with double bed aft and large ensuite forward can be added portside. For the first time within the range, the team is also considering a lightweight, low-consumption “air conditioning” option in the cabins and a dedicated skipper/crew cabin with its own en-suite accessed from the deck, as it’s expected that at this size some owners will expect more comfort and more assistance from a professional crew than is the case with smaller models. Washing machines and other appliances can also be specified as options for those with longer distance cruising plans.

Owners of the ORC42 and 50 have found that a large solar panel mounted on the davits generates sufficient energy for all onboard needs in anything but abysmally poor weather, but the 57 has the option of additional roof-mounted solar panels which will likely be needed to power air conditioning if specified.

Cailliau sums up the Ocean Rider Catamaran range: ‘we know that we have a very small niche within the catamaran market, we make boats for sailors who love the sea and the sensation of sailing fast, and who are willing to sacrifice a little bit of luxury for the sake of performance. Amongst our existing client base, I would say the use of the boats is 50/50 between racing and cruising, although most owners do both to a certain extent. We have a very highly skilled workforce who love to sail and who are passionate about building great boats, so for that small niche of sailing enthusiasts looking for a catamaran of this size we have a product that we hope is a long way ahead of any other brand’.

With a base price of €1.1M and a sail-away price of €1.5M including sails and electronics and most other options, the ORC57 offers fantastic value for money, and there are few if any other brands offering models with similar racing and cruising credentials at a similar price. Boats number one and two are already sold and number three is available for autumn 2022, although if you want that one you’ll probably need to get the order in quickly as Marsaudon Composites look like they have another success story on their hands…