A most robust pedigree 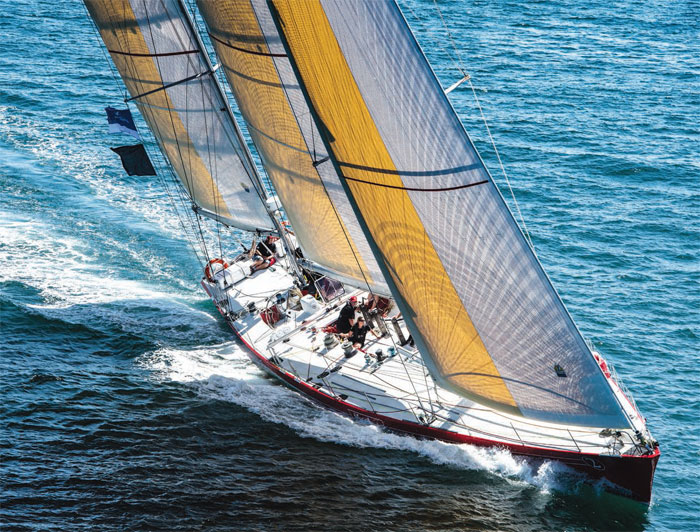 It began with laying down one Kevlar thread at a time using a converted ballpoint pen... today things are a little different

Twenty years ago, in an old-school Auckland sail loft, Doyle Sails’ Richard Bouzaid began experimenting with a new way of building sails utilising an adapted ballpoint pen to direct single fibres onto a substrate in line with the predicted loads.

In many respects this was typical of what New Zealanders refer to as a number eight wire approach to innovation. Number eight wire is what sheep farmers use to fence their paddocks; the idiom relates to the combination of ingenuity and self-reliance an isolated island nation had to develop in order to flourish.

‘We could only lay one Kevlar fibre at a time through an adapted ballpoint pen,’ Bouzaid recalls. ‘It was a very typical Kiwi way of doing things.

‘We were using a heatset glue on prepreg fibres with a plotter that was only 1.4m wide, so the sail panels had to be very narrow. We had this little laminator we ran the panels through. A young Spanish kid was working for us at the time. He ended up writing our original software to do the fibre layouts and generate files for the shapes.’

Although this was a decidedly small beginning, Bouzaid had big ambitions. New Zealand’s superyacht industry was fast gaining global recognition and the country had also just staged its successful defence of the America’s Cup, the first nation outside of the United States to achieve that.

Main picture: early Doyle Stratis sails, like these on the legendary Whitbread maxi ketch Steinlager 2 were a complete game changer, not just for the sailmaking industry but for sailing in general. It’s amazing to remember that this pivotal invention started with a modified ballpoint pen laying single fibres of Kevlar

Richard Bouzaid is the third generation of a sailmaking family stretching back to his grandfather, Leo, and the days of cotton and canvas. Bouzaid’s father Chris, also a sailmaker, was one of the trailblazers of New Zealand yachting’s extraordinary ascent to the pinnacle of international yacht racing, winning the One Ton Cup in Germany in 1969 and again in Australia in 1972.

At the start of a new millennium, with New Zealand riding a wave of success, Richard was eyeing the lucrative superyacht market. ‘Obviously, laying one fibre at a time wasn’t going to work for superyachts, so we had big strides to make.’

At the time of those first small steps with Kevlar fibres, Bouzaid was in a Doyle franchise loft in partnership with Chris McMaster, who became a big driver in the development of the new system. In 2017, the ownership of the Doyle Sails International brand was acquired by a partnership of Mike Sanderson, Richard Bouzaid and David Duff. All 50 Doyle lofts around the world rely on the New Zealand operation for their supply of Stratis, ensuring consistent quality in every product. Almost all the custom design is also done in New Zealand with approximately 70 per cent of the Stratis output exported in kitset form for the other lofts to assemble and finish.

‘Originally it wasn’t called Stratis,’ says Bouzaid. ‘I think we called it Fibrelay. The Stratis name came from a Doyle Group seminar in 2008. We tossed around names. Robbie Doyle had developed a whole lot of products with cool names. There was the StackPack and Swing Battens, all sorts of things.

‘We felt we had to have something that would stand out a bit. I can’t remember all the candidates that came up in our brainstorming session. We felt Stratis stood out and it has worked well. It has gone from strength to strength as a product.

‘Two things are incredibly important to our manufacturing process,’ Bouzaid continues. ‘They are high pressure laminations and a predictable environment.

‘Everything is humidity and temperature controlled. We also deploy significant heat sensing monitoring and instrumentation, so that when we laminate, we have an incredible degree of control over the product’s consistency.’

At Doyle Sails’ 11,000m² purposebuilt headquarters in Auckland, the Stratis operation takes place in a separate climate-controlled area where the sail fabrics are built on three flat platforms, 46m, 50m and 65m long, all at 11m wide.

The construction process involves laying down a complex matrix of fibres under a combination of vacuum, direct pressure and heat. Fibre combinations of carbon, Technora, Ice, or Polyester are applied in varying ratios depending on the application.

‘Each sail is designed and engineered for the customer’s yacht and application, whether it is intended for cruising, club racing or grand prix campaigning. Every time the Stratis machine runs a path of fibres, it’s entirely custom-made for that sail.’

Computer-controlled machines lay down the precise arrangement of fibre threads as they pass backwards and forwards across the panel. Laminating machines exert 12 tonnes of downward pressure and infra-red heat on the surface, fibres and adhesives, which, together with extreme vacuum, ensure void-free lamination of the membrane.

It is highly automated and very efficient. On average the CAD fibrelaying machines travel 150,000 metres a week, laying down about 1.3 million metres of fibre and consuming nearly 150kg of carbon and 190kg of para-aramids. The flat beds mean a whole range of different size sails, or sections of sails can be built simultaneously, maximizing the production capacity at all times.

Above: Stratis technology isn’t just for hi-tech racing boats; it has major advantages for almost any type of sailing yacht.
Below: Doyle’s Structured Luff and Cableless sails have not only delivered significant performance gains, they have also changed the way that the hull of a new maxi racer like the Botín 85 Deep Blue can be engineered and built to deliver valuable weight savings 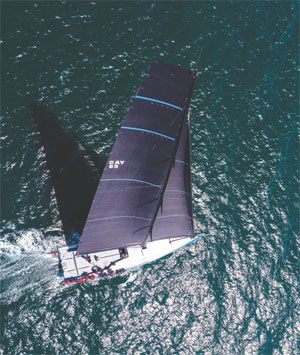 ‘A small sail that would have taken two days to build 20 years ago, would now be ready for finishing in a couple of hours,’ notes Bouzaid.

It is a modern, hi-tech production system, although a fair dose of Kiwi number eight wire ingenuity went into building it. Much of the machinery was modified from other industries — some from carpet manufacturing, some from laminating industries and some of the heating and sensing equipment came out of the food industry.

One of the early decisions was to build the sails on flat surfaces, as opposed to three-dimensional moulds. ‘The throughput with moulds is very slow,’ Bouzaid says. ‘To keep costs down, the build process had to be much more efficient.’

Another early decision was to reduce reliance on third-party suppliers and bring as much of the process as possible in-house to ensure consistent quality. This was a lesson born of harsh experience when, across the industry, early laminate sails suffered glue failures.

‘We tried all kinds of glues until we finally developed our own formula. Reliable glues are a key component to this whole process. The glue we developed in-house was far superior to anything we had found on the market up to then.’

As part of that drive for quality control, Doyle Sails continues to devote resources and attention to research and development. ‘We are always investigating new technologies and looking at new products and refining what we do. That could be process-driven, design-driven, or related to mechanical componentry.

‘We have one R&D focus on automation, another on glue, fibre and lamination, while the whole design group is constantly paying close attention to structures. Technology evolves within our own group,’ Bouzaid continues, ‘primarily in New Zealand but also with valuable contributions from other sail lofts within the group located all around the world.

‘We also work closely with universities and research institutions and have had engineering interns working here on specific projects. A big focus is on making membranes do more and on developing smoother, more durable outer surfaces without adding weight.’

‘There are always exciting things happening around these big campaigns, which often raise questions about how they might be used to advantage in sailmaking down the track.’

Much of the early advantage in the transition from Dacron panel sails to Stratis products related to weight reduction. Back in 2001, when those single-fibre ballpoint pen trials were starting, Bouzaid received an order for a cruising mainsail for the J-Class yacht, Velsheda.

When the Dacron-panelled sail was completed, it weighed 1200kg and it took 20 men to manhandle it down the narrow stairs from the mezzanine loft.

‘We have recently completed a beautiful cruising mainsail for the J-Class Lionheart,’ says Bouzaid.

‘It weighs about 300kg. Stratis has changed everything. I cannot actually remember when we last built a panelled sail.’

In the past 10 years, with the weight-saving benefits already embedded in the process, attention has focused more on performance and how the sails work. ‘A great deal of what we do now is about how we can manipulate our membranes to do more. It is not just about sails retaining rigid shapes. Our structures are designed to be manipulated, hence the evolution of Structured Luff and Cableless sails.

‘This ability to manipulate the shapes means you no longer need five codes of each sail locked into a narrow working range. Our inventories provide flexibility.’

Advances in sail technology also feed back into broader areas of performance and design. On their own, lighter, stronger sails reduce weight aloft, which improves performance, but Structured Luff and Cableless sails also reduce loads, placing less demand on rigs and supporting structures.

Below: for superyachts like the 152ft André Hoek designed ketch Elfje, Doyle sails create a virtuous circle that starts with huge weight savings in the sails themselves combined with better load distribution, which then leads to reduced loads on the mast and forestay and hence less need for hull reinforcement, which then delivers further weight savings and performance gains along with better reliability 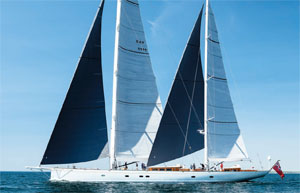 ‘We are able to take load away from the mast and stays and carry more load in the sails,’ says Bouzaid. ‘There are big gains being made there.’ This has obvious benefits in racing applications, but also creates a virtuous cycle in superyachts, where reduced loads and weight can lead to smaller engines, reduced fuel consumption and better sailing performance.

As to the future, Bouzaid says tools developed in-house and the ongoing research into how all aspects of rig and sail systems interface are revealing things operators and designers could never see before and will lead to significant improvements in aerodynamics and all areas of performance.

‘Increasingly, sails are going to be a lot more intelligent and provide a great deal of information through monitoring systems, fibre optics and data-streaming, much of which is coming from grand prix race programmes.

‘Sails will probably look quite similar, but they will be doing much more than they are doing now.’ Just as the technology has made astonishing strides in the past 20 years, Bouzaid predicts there will be no let-up in the pace going forward. ‘You will be staggered by the progress,’ he says.